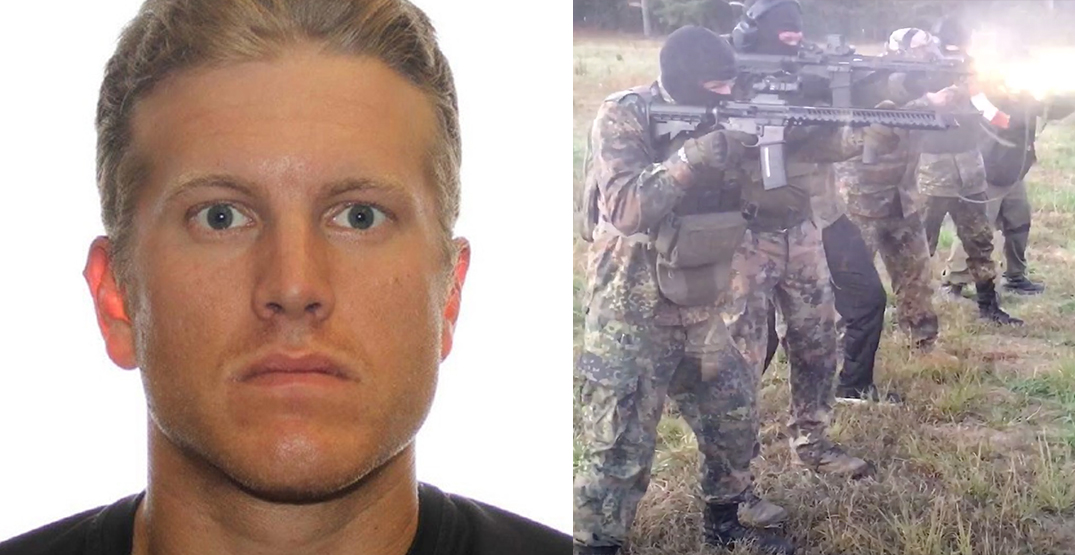 RCMP (Accessed via archive.org)/ The Base propaganda video (Telegram)

A missing Canadian man suspected of being a member of the neo-Nazi organization known as The Base has been arrested in the US after disappearing in September.

Patrik Mathews, a former member of the Canadian military reserve, was the subject of an investigation by Ryan Thorpe of the Winnipeg Free Press that exposed his involvement as a recruiter with a para-military hate group known as The Base.

According to a release from the US Department of Justice, Mathews was arrested on Thursday along with two other members of “the racially motivated violent extremist group ‘The Base’ with firearms and alien-related charges.”

Mathews has been charged with transporting a firearm and ammunition with intent to commit a felony.

“The complaint also charges Mathews with being an alien in possession of a firearm and ammunition,” reads the release. “The complaint was filed January 14, 2020, and was unsealed today upon their arrests by the FBI.”

His associates, Brian Mark Lemley, Jr., age 33, of Elkton, Maryland, and Newark, Delaware, and William Garfield Bilbrough IV, age 19, of Denton, Maryland, were also arrested and charged with weapons-related offences as well as transporting and harbouring an alien (Mathews). 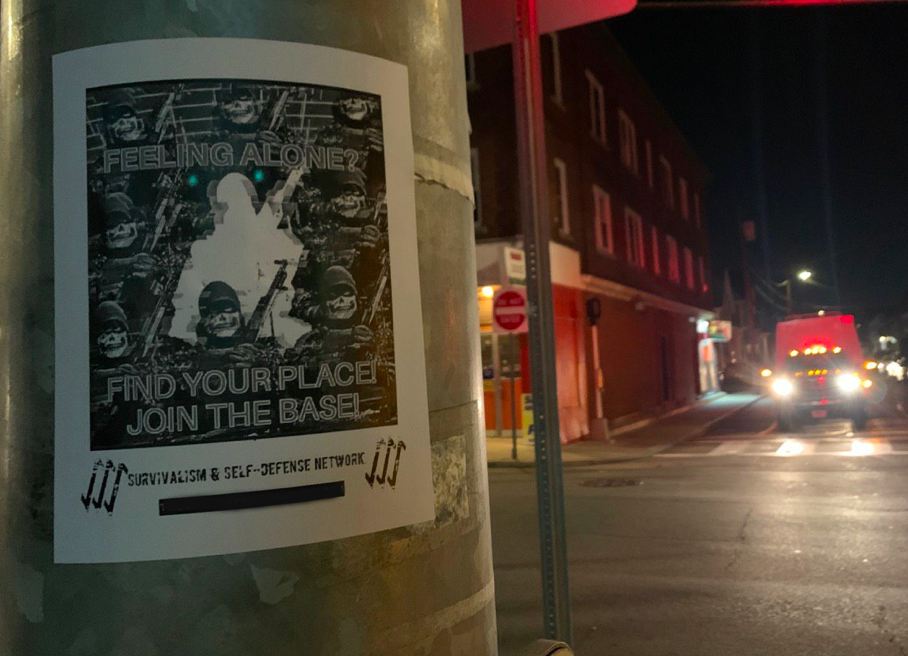 The Base flyer allegedly posted in New Hampshire (Telegram)

The release says that within their encrypted chat rooms, Base members have regularly discuss the creation of a white ethnostate, committing acts of violence against minorities (“including African-Americans and Jewish-Americans”), the organization’s military-style training camps, and ways to make improvised explosive devices.

Lemley is also identified as a former Cavalry Scout in the United States Army, while Mathews served as a combat engineer in the Canadian Army Reserve. The timeline provided by the US Justice Department suggests that the trio were under surveillance, as their movements and activities are laid out in detail.

According to the release, on August 19, 2019, Mathews unlawfully crossed from Canada into the United States near the Manitoba/Minnesota border. He would be reported missing by the Beausejour RCMP on August 26, 2019, and Mounties reported finding his truck in Piney, Manitoba, on September 2 in a since-deleted press release. Piney is a rural municipality located a short distance north from the US-Canada border.

“The RCMP believe Mr. Mathews may be under a significant amount of pressure due to this ongoing investigation and the extensive media coverage it has garnered,” the RCMP wrote at the time. “Anyone who sees him is asked to call police immediately and to avoid engaging with him.”

Eleven days after Mathews’ arrival in the US, Lemley and Bilbrough allegedly drove from Maryland to Michigan in order to pick up Mathews. All three men returned to Maryland on August 31, 2019. Eventually, Lemley would rent an apartment for him and Mathews in Delaware.

It was during December 2019 that it’s alleged Lemley and Mathews used an upper receiver and “other firearms parts” to build a functioning rifle.

“Also in December, Lemley, Mathews, and Bilbrough allegedly attempted to manufacture a controlled substance, DMT, at Lemley and Mathews’ apartment,” says the release.

During this time, Lemley and Mathews are said to have purchased approximately 1,650 rounds of ammunition and travelled back to Maryland where they would test the built firearm on a range, and retrieve plating required for body armour.

The Base is part of a larger decentralized neo-Nazi movement

The Base, like many of these groups in Canada, recruits members through a selective screen process designed to hide member’s identities and locations, in many cases even from each other.

The group regularly posts propaganda images to a variety of chat groups on the encrypted app, Telegram. Claiming membership across the globe, photos from one of the larger rooms shows alleged members in the USA, Finland, Australia, and more, posing alongside flags emblazoned with Nazi iconography as well as their own logo, and the symbol of other like-minded National Socialist organizations, like Atomwaffen Division. 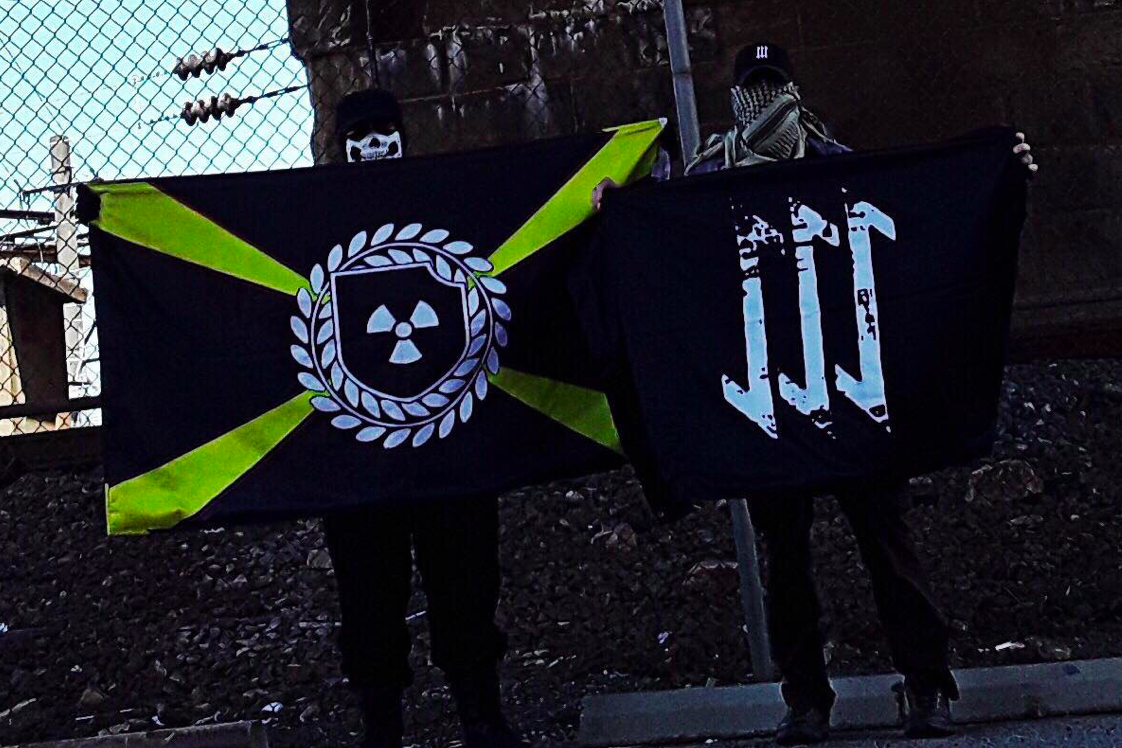 Two individuals pictured holding the flags for Nazi groups Atomwaffen Division (left) and The Base (right)(Telegram).

Other images urge like-minded individuals to join their cause while also showing support for the book Seige by longtime American Nazi James Mason. The book, a collection of Manson’s writings compiled into one large volume, is considered required reading for prospective members looking to enter this extreme form of white nationalism.

Seige serves as a guide for both the ideology and methodology required to set up small decentralized cells of militant white nationalists.

The Base describes itself in one post as a “fraternal network of self-defense and survivalist trainers, students, and enthusiasts.” They advocate for the inevitability of a coming war between races, urging members to prepare by forming cells of three or more and networking with other “trouble trios.” The Base also says it is willing to provide training to members of other organizations.