A proposal to rename a one-block stretch of Abbott Street after the late Vancouver Canucks coach Pat Quinn is moving forward to the next stage.

Next week, the City of Vancouver’s Planning Department will present a report to Council that recommends renaming the 700-block of Abbott Street from Expo Boulevard to Pacific Boulevard. This follows a passed motion proposed by Mayor Gregor Robertson on December 16 to examine the possibility of renaming a street to honour Quinn, who passed away from illness at the age of 71 on November 23.

Staff also considered renaming the plaza south of the Pacific Coliseum, the former home of the Canucks, but they opted Abbott Street instead given that Quinn was instrumental in the team’s move to Rogers Arena (General Motors Place) in 1995.

The municipal government does not consider renaming streets unless the renaming is meant to improve public safety, but staff understood the historic and cultural implications of Quinn’s legacy on both the local and national spheres of hockey and charity work.

In addition, the City’s Civic Asset Naming Committee has no issue with the street renaming’s impact on the integrity of existing historical references. The 700-block of Abbott Street is a relatively recent extension of Gastown’s century-old Abbott Street, named after Henry Braithwaite Abbott, a Canadian Pacific Railway executive.

The street was extended decades ago when the rail yard under the Dunsmuir and Georgia Street Viaducts were demolished.

Only the address of Rogers Arena will be affected by the street renaming. 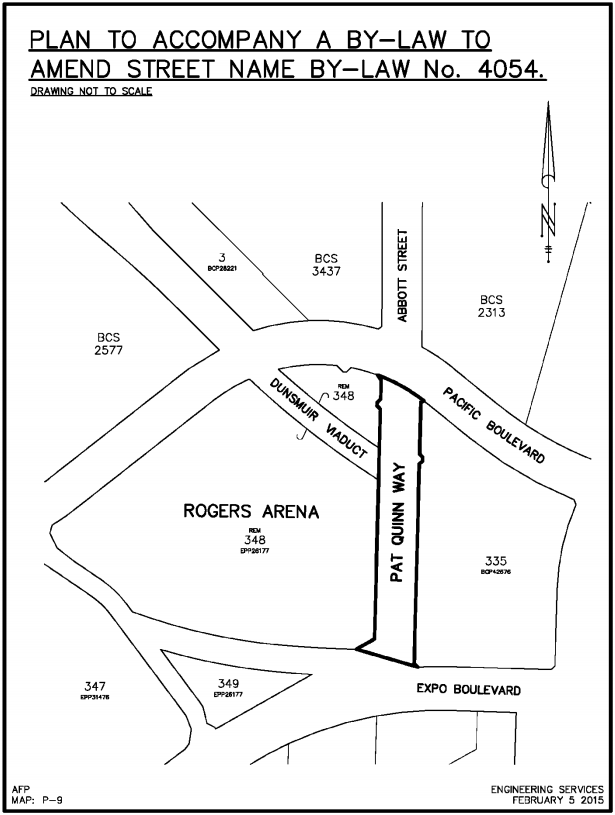