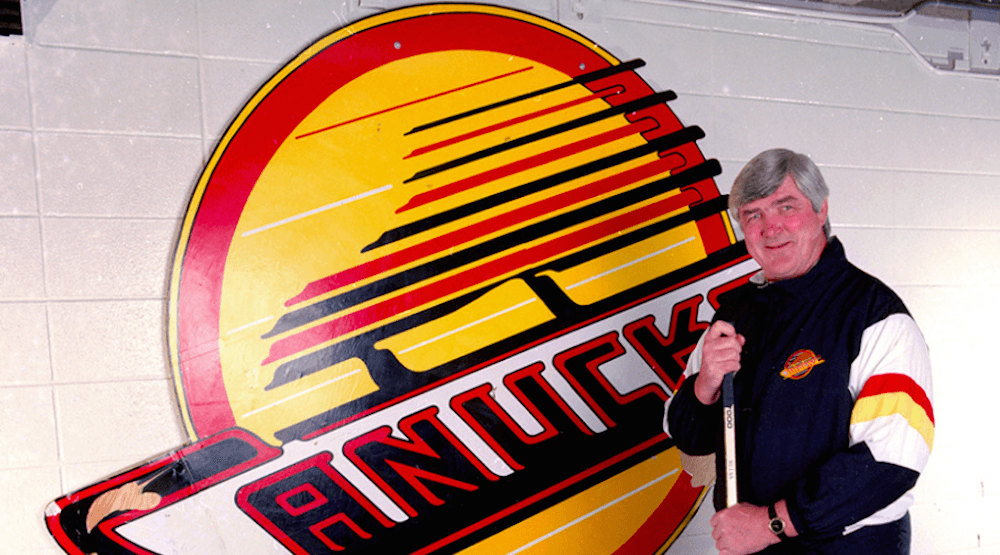 It’s official: the late Pat Quinn is a member of the Hockey Hall of Fame.

Along with Eric Lindros, Sergei Makarov, and Roggie Vachon, Quinn was formally inducted at the Hall of Fame in Toronto on Monday. Pat’s daughter Kalli delivered an emotional speech to those on hand, which included a number of current and former Vancouver Canucks. Trevor Linden, Kirk McLean, Igor Larionov, Brian Burke, and Rick Ley watched on, as did Quinn’s wife Sandra.

Kalli Quinn: "Dad loved this life and this game – second only to his family." https://t.co/31ZP11sb1L #TSNHockey pic.twitter.com/hQjWvmZRqd

“Thank you again for bestowing this wonderful honour on him, he would have been extremely proud and so very humbled,” Kalli said, fighting back tears. “I’m sure he’s looking down with a cigar in one hand and a drink in the other with that wonderful smile he had and a twinkle in his eye.”

There aren’t many true Vancouver Canucks in the Hall of Fame, but Quinn – who passed away suddenly nearly two years ago – without a doubt, is one of them.

“He had a tremendous amount of success on and off the ice in Vancouver and loved being a Canuck and calling Vancouver his home,” Kalli recalled.

Quinn was an original Canuck as a player, and helped the organization to its first sustained success in franchise after he was hired as president and general manager in 1987. He coached in Vancouver for parts of five seasons from 1991 to 1996, which included a Jack Adams Trophy in 1992 and a run to the Stanley Cup Final in 1994.

Quinn was responsible for acquiring many of the best players in franchise history.

As great as Quinn’s career in Vancouver was, he was also inducted for his work in a number of other areas. For instance, he remains the only person to coach teams to victory at the Olympics, the World Cup of Hockey, World Juniors, and Under-18 World Championships.

Quinn coached 21 seasons in the NHL with Philadelphia, Los Angeles, Vancouver, Toronto, and Edmonton. He ranks seventh on the all-time list with 684 NHL coaching wins.

“Follow your dreams.
Listen to your heart.
And obey your passion.” – Pat Quinn pic.twitter.com/qClsRmh71J