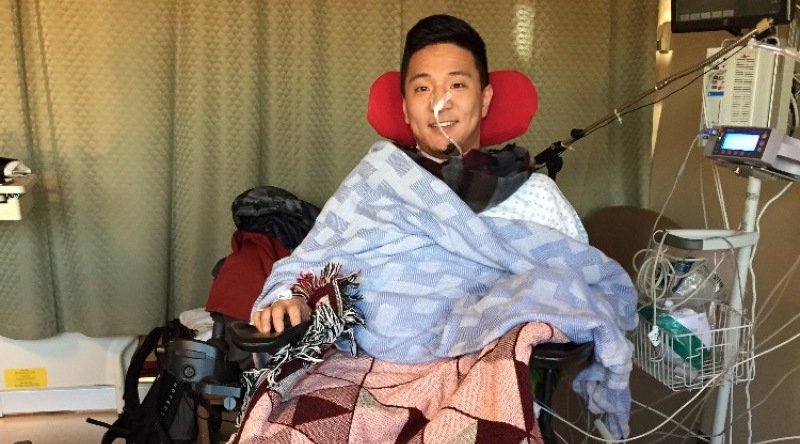 The friends of a Vancouver man who was suddenly paralyzed and had to use his chin and tongue to call 9-1-1 are raising money to help fund his medical expenses.

According to the GoFundMe page, Andrew Cho started feeling dizzy while he was at dinner with friends on January 6.

When his neck and outer limbs became numb, Cho decided to go home, writes friend and fundraiser Danny Brody on the GoFundMe page, but the symptoms got more severe.

Fearing the worst, Cho left his door unlocked in case paramedics needed to get in later. That turned out to be a very fateful decision.

‘An amazing feat of strength’

Unbeknownst to Cho, he had a burst blood vessel in his vertebrae – and when he stood up, the trapped blood put so much pressure on his spinal cord he collapsed.

Cho was paralyzed instantly. But astonishingly, all was not lost.

“His phone landed ten inches from his body. In an amazing feat of strength and survival, he was able to inch toward his phone using only his chin,” writes Brody.

“After five unsuccessful attempts, he was able to use his tongue and with the help of Siri, dial 911.”

Cho has since undergone emergency surgery and daily physiotherapy. He has regained some movement on his right side, and has feeling on his left side down to his biceps.

“His optimism and spirit remain strong, and he’s making incredible progress each and everyday,” writes Brody. “We can’t wait to get him up and running again.”

However, Brody writes, his friend still has a long road of recovery and huge costs ahead of him, including home rehabilitation and medical equipment.

‘Walk out this mother f**ker’

At the time of writing, the GoFundMe page had already raised $93,077 – surpassing Brody’s fundraising goal of $75,000 easily.

And Cho has released a video from his hospital room, thanking supporters for their help.

“Andrew continues to impress us with his positive outlook, and determination to ‘walk out this mother f**ker,'” writes Brody.

To keep the support for Andrew Cho coming while he recovers, check out his GoFundMe page.

“Whether it’s the next adventure or to simply comfort you during a quarter-life crisis, Andrew is always there,” writes Brody.

“For these reasons and many more, let’s come together and show this unbelievable friend our support.”