We’ve teamed up with Pacific Theatre for some wicked giveaways in the past and this upcoming season will be know different as we continue to feed Vancouverites theatre appetite. This time around Pacific Theatre is ringing in the 2010-2011 season with its most diverse offerings yet! A mixture of in-house and guest productions that will entice, challenge, and delight, includes:
“What’s the use in loving someone when it isn’t nearly enough to save them?”
THE BUSY WORLD IS HUSHED by Keith Bunin
September 24-October 16 (preview September 23)
a guest artist production by one2theatre
When a widowed Episcopal minister hires an agnostic gay man as her scholarly assistant, she may have found the missing link in an estranged relationship with her wayward son. Mixing sexual politics with spiritual contradictions, her motivations are called into question when secrets from the past begin to surface.
Directed by Richard Wolfe. Featuring Gina Chiarelli, Sebastien Kroon, and Adam Bergquist.
“Hearts and souls are tangled and torn, God is abused and praised, and the audience is left in a state of contemplation.” Theatredogs
“Forgive me or kill me. That’s the choice you have.”
PLAYLAND by Athol Fugard
November 5-27 (preview November 4)
New Years Eve, 1989. Two South Africans, a black security guard and a white soldier, meet at a travelling amusement park. A powerful exploration of guilt and damnation, truth and reconciliation in post-apartheid South Africa.
Directed by Anthony F. Ingram. Featuring Tom Pickett and Michael Kopsa.
“Cathartic. Soul-cleansing.” British Theatre Guide
“Snuggle up to the fire, sit back and listen.”
CHRISTMAS ON THE AIR by Lucia Frangione
December 10-January 1 (preview December 9)
a guest production by Midnight Theatre Collective
Journey back to the days when radio was king, as Philomena and Percival B. Frank present their annual Christmas show before a live studio audience. On-air magic and off-stage romance combine for a show as comfy as a cup of mulled cider and a plate of sugar cookies.
Directed by Ian Farthing. Featuring Damon Calderwood, Seana-Lee Wood, Lalainia Lindbjer, and Ben Elliott.
“Frangione’s merry little Christmas show overflows with the warmest sentiments of the holiday season.” Canoe.ca
“It is absurd to apologize for a Mystery.”
MY NAME IS ASHER LEV adapted by Aaron Posner from the novel by Chaim Potok
January 28-February 26 (preview January 27)
When a young Jewish prodigy paints The Brooklyn Crucifixions, the reaction of his Orthodox community forces a terrible decision – between family and vocation, between his love for God and his desperate need to make art. Heartbreaking, triumphant.
Directed by Morris Ertman.
“A marvelous evening of theatre: intimate, sincere, magical.” Philadelphia City Paper 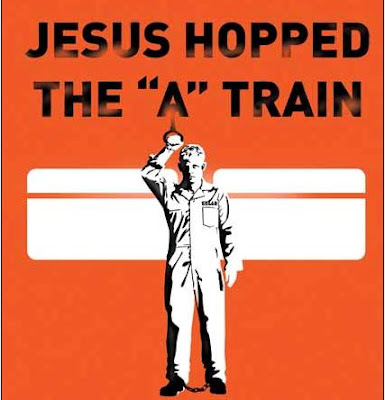 “How many sons of god you know drive a Lexus?”
JESUS HOPPED THE “A” TRAIN by Stephen Adly Guirgis
March 11-April 2 (preview March 10)
a guest production by Glass City Theatre
Rikers Island. Two men sit in solitary confinement, 23 hours a day. Lucius Jenkins is a serial killer who awaits execution, Angel Cruz stands accused of a murder he doesn’t believe was a crime. Visceral, gritty, harrowing – an uncompromising drama about contradiction, contrition, and hypocrisy by the author of The Last Days of Judas Iscariot.
Directed by Angela Konrad.
“Fire-breathing. A probing, intense portrait of lives behind bars, it has the courage of its intellectual restlessness.” New York Times
“We joined ‘cause we’d get hot meals, a trip to Europe, and a shiny pair of boots.”
JAKE’S GIFT written and performed by Julia Mackey
April 6-16
Pacific Theatre presents a Juno Beach production
When a crusty, down-on-his-luck WW2 veteran reluctantly makes the trip to Juno Beach to honour his brother Chester, his encounter with a precocious ten-year-old challenges the old soldier to confront some long-ignored ghosts. The most charming, heart-warming, and laugh-out-loud-funny one-woman show you’ll ever see.
“The most theatrically pure show I have ever seen. A stunning performance.” CBC 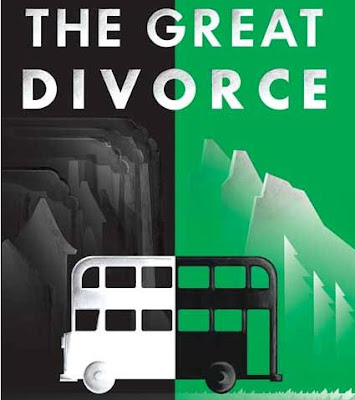 “If there is one wee spark under all these ashes, we’ll blow it till the whole pile is red and clear.”
THE GREAT DIVORCE adapted by George Drance and The Magis Theatre from the novel by C.S. Lewis
an Emerging Artist Showcase
Hell resembles nothing so much as a dreary industrial city in the north of England, its denizens free to leave whenever they like – aboard a bus bound for a heaven that’s like nothing you’ve ever imagined.
Directed by Scott D. Campbell. Featuring Philip Miguel, Evan Lendrum, Moriah Ophardt, and Bria Crouch.
“Narnia for adults! Beatific, bright-clad, incorruptible spirits are pitted against flawed, monochromatic ghosts. It’s not a fair fight.” Seattle Weekly
SECOND STAGE EVENTS
CHRISTMAS PRESENCE
At PT December 14, 19 and 20, on the North Shore December 17, and in the Valley December 18
Our favourite holiday tradition. Spend an evening with artistic director Ron Reed and a handful of local musicians, singers, and actors. Intimate and casual, Christmas Presence is storytelling at its best.
SIDE SHOW
April 19 and 20
Comedy improv with a dash of chaos. Good clean fun for the whole family with our zany friends from around the city. Let the games begin!
MUSIC @ PT: THE CLASSICS
January 8, June 25
Back for a fourth consecutive season, the Pacific Rim String Quartet, PT’s resident chamber music ensemble, rpesents a series of intimate concerts connected to the themes, characters, and settings of the season’s plays.
PT ON THE FRINGE
This September, Pacific Theatre will play host to four remarkable one-person shows with a distinct Pacific Theatre flavour in the Vancouver International Fringe Festival.
CONFESSIONS OF A PAPERBOY by Doug Curtis
A young Christopher Columbus (no, not that one) has it on good authority he should become a paper boy – God told him to. So what’s so important about delivering papers?
DIRT by Robert Schneider
An illegal Iraqi immigrant sells roses on the street to people who won’t meet his eye.
MIRACLE IN RWANDA by Leslie Lewis Sword
For 91 days, Immaculee hid in a bathroom from machete-wielding killers. Twelve years later she returns to the tiny room that saved her life.
STRETCH DOG by Robert Olguin
Think of the worst commercial you’ve ever seen. Now think of the poor jerk who had to be in it.
VancityBuzz.com