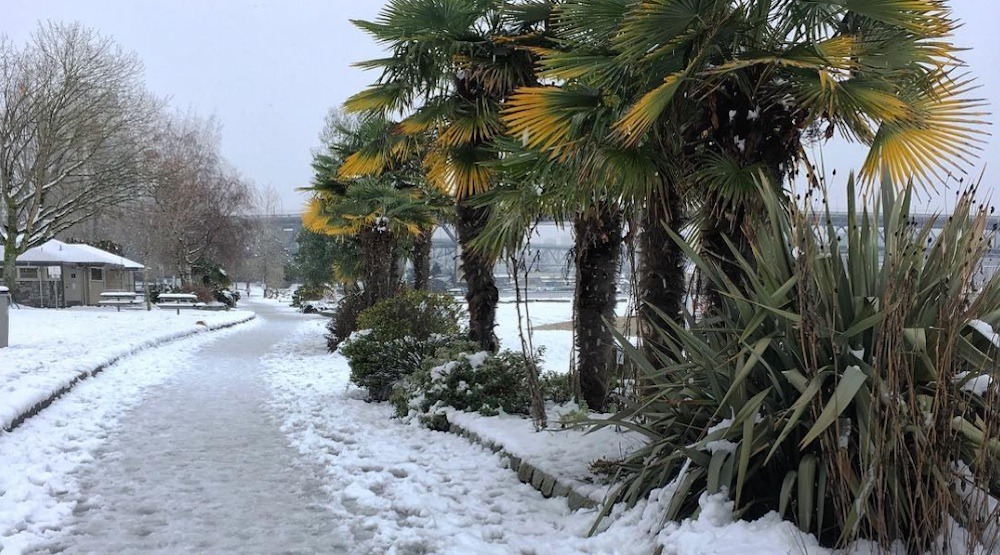 Snow, slush, and ice on the half-marathon course in downtown Vancouver. (Photo by: Véronique Normandin / Instagram)

Organizers of tomorrow’s Pacific Road Runners First Half-Marathon in downtown Vancouver have announced that they are being forced to cancel the race due to poor course conditions.

Approximately 2,000 runners were registered in the race, which begins and ends at Yaletown. The course runs largely along the water, through Locarno and Sunset beaches and the entire Stanley Park seawall loop before returning.

Snow and ice buildup along the course is to blame, and up to another 9 cms is expected from this evening through Sunday morning.

Looks like the Vancouver First Half is cancelled. Sad to be missing this race. Mother Nature didn’t want it to happen! On the upside, I ran outside without a face mask and Vancouver looks beautiful under a fresh blanket of snow. @sauconycanada #FindYourStrong #FreedomISO #Firsthalf #RunVancouver #vanfirsthalf #runyvr #slush #instarunners #stanleypark #seawall

“Two of our committee members inspected the seawall early this morning and reported back,” said Terry Bushnell, the event’s race director, in a bulletin.  “It was obvious that it makes no sense to continue with the race.”

Those registered in the race can still pick-up their race shirt, medal, and finishing jacket at Roundhouse Community Centre from 8 am to 10 am on Sunday.

The last-minute cancellation decision could be financially challenging on the organization as organizers have already paid most of their expenses.

“We will make an announcement later this week on how we can compensate our runners,” Bushnell continued. “It will take us a few days to assess the fallout of cancelling our race.”

In contrast, on Saturday morning on the other side of the city, the Vancouver Hypothermic Half-Marathon went on as planned even with the snow. With this race from Jericho Beach to Spanish Banks, runners have the understanding that the event occurs in the elements.