Should Vancouver’s mayor and city councillors receive a raise? On Tuesday, Vancouver City Council approved a motion to contract an independent commission to review its salaries and compare it with the levels of other jurisdictions.

The review will examine whether the current formula for renumeration, established in 1995, should be replaced with a new and updated system. The current formula sets the mayors’ salary at 2.27 times what councillors earn, with annual pay hikes based on Statistics Canada’s data on what the average Vancouverite earns.

However, councillors are now suggesting that the existing formula might be outdated given that Statistics Canada’s new surveys are performed on a voluntary basis, which means the data might not accurately reflect what locals earn.

The motion, drafted by Vision Vancouver councillor Geoff Meggs, also says that the work of the city’s elected officials has changed with the rise of emails and social media as a vital form of communication with their constituents.

In other Canadian municipalities where there is a ward system, councillors are supported by a team of staff, but Vancouver councillors do not have such a support system for their use. With a city population tipping just over 600,000, Vancouver’s councillors each represent about 60,300 residents – the second highest in the region after Surrey’s figure of 63,750 residents per councillor.

But Vancouver’s city councillors also hold less responsibilities than their counterparts in other municipal governments given that the city’s extensive parks and recreational facilities are overseen by the elected Park Board, which is one of the only elected bodies of its kind in the country.

Vancouver’s mayor earns $154,347 per year while city councillors are paid $67,994 per year, in addition to other stipends and expenses they are able to claim, while Park Board Commissioners earn $8,000 annually for their part-time work.

Some of Vancouver’s elected officials also earn more as they are appointed to represent the municipal government in other local government bodies and entities such as the Union of B.C. Municipalities, the Metro Vancouver Regional District and TransLink’s Mayors’ Council. Councillor Raymond Louie is paid $35,000 per year for sitting on the Metro Vancouver board as a vice-chair and mayor Gregor Robertson could receive $30,000 per year for his newly appointed role as the chair of the Mayors’ Council.

Here’s a comparison of City Council salaries in Metro Vancouver, B.C., Canadian and other major municipalities: 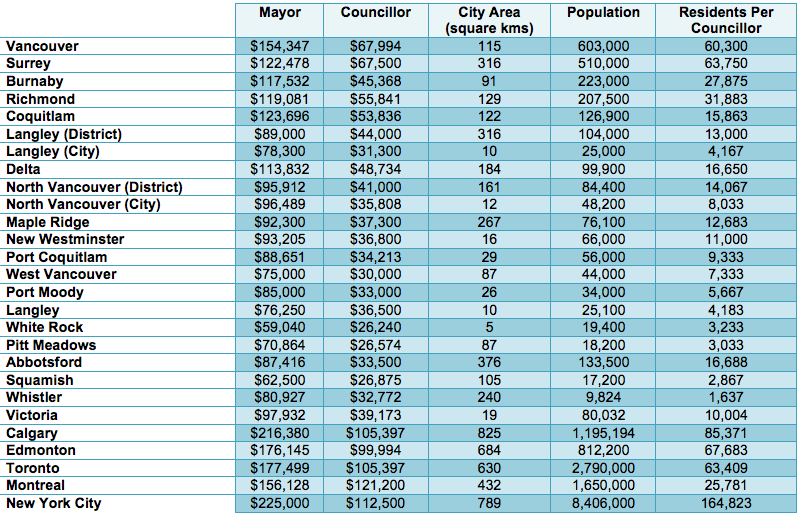