Vancouver’s historic Ovaltine Café has been serving up affordable diner fare for over 70 years, but it’s been about 30 years since the beloved restaurant has been open for dinner. Thanks to new ownership and a pair of veteran Vancouver restaurateurs pitching in, the Ovaltine Café is hoping to move forward while honouring the past.

Even in daylight, the restaurant’s oft-photographed neon sign outside beckons, and inside the smell of sizzling burgers mingles with the murmured din of customers chattering and placing orders. 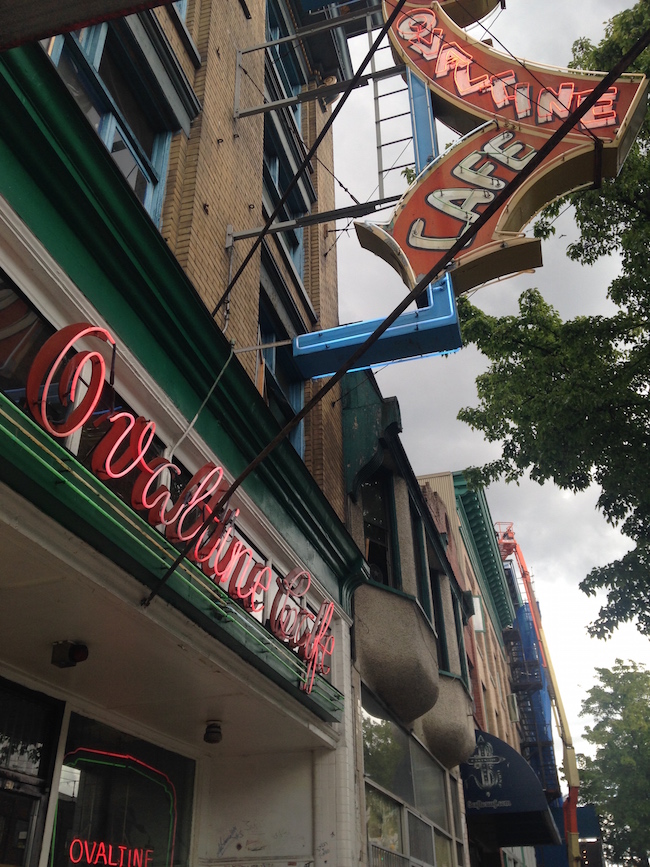 The Ovaltine Café opened in 1942 (it’s one of Vancouver’s oldest restaurants), and seems to have remained fixed in time, though much of the world has changed right outside the diner’s door. The neighbourhood has evolved into a no-man’s land for many, burdened by the unsettling and ongoing crisis of homelessness and addiction that plays out steps from where families and longtime locals bite into club sandwiches and meatloaf.

While other restaurants of the Ovaltine’s peer class have long since faded away, or have their fate held in the balance (see: The Only Seafood restaurant), this diner is a survivor story. Mother-daughter team Grace (mom) and Rachel Chen took over in late 2014, both familiar faces on the neighbourhood dining scene. Grace Chen ran the café at Save On Meats pre-Mark Brand, and Rachel Chen operates Chinatown’s Perks.

The Chens recently brought Corben Winfield and Theo Lloyd-Kohls on to help freshen up the menu and explore what was possible at the Ovaltine for dinner and beyond. The results are subtle, but significant.

Both Winfield and Lloyd-Kohls have been in the restaurant business in Vancouver for a long time, but neither are afraid to get their hands dirty. Winfield owns Six Acres in nearby Gastown, and recently launched Hi-Five, a grilled cheese sandwich walk-up window, while Lloyd-Kohls is behind Dunlevy Snackbar, but they’ve now wear numerous hats at Ovaltine, from dishwasher to server to organizing and promoting the diner’s new evening hours.

Most of all, the duo want to see people inside the Ovaltine at night, and for these new diners to see, well, the diner after dark. “This place is so gorgeous,” says Lloyd-Kohls, whose enthusiasm for the “unique and mysterious” restaurant is unmistakable. He describes the neon lights from outside reflecting in the interior, and the vibe of the eclectic music they play, and it’s hard not to feel nostalgic for a time most Vancouverites never knew at the Ovaltine.

“It’s a very soulful project,” adds Lloyd-Kohls of the endeavour to expand the Ovaltine’s offerings. 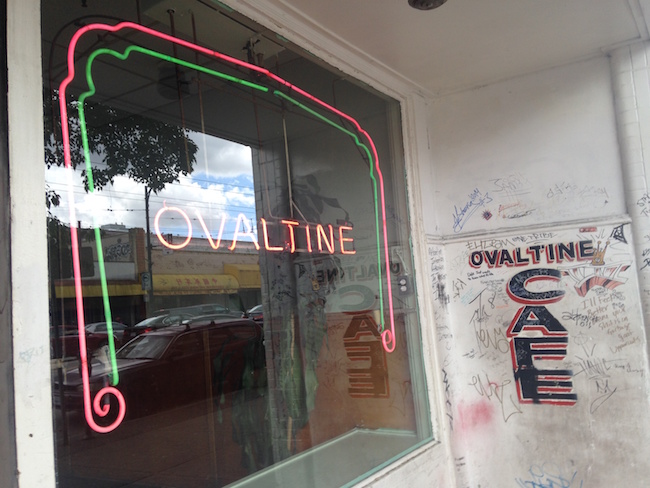 And, still, despite all this romanticism, there’s the real nitty gritty. First in what Winfield calls the “very DIY” aesthetic improvements made so far (look up to see woks, yes, woks, spray painted gold and inverted to serve as hanging light fixtures) and then, of course, in the reality that is the Downtown Eastside, which clings as close as their doorstep.

No one is burying their head in the sand at the Ovaltine when it comes down to the fact that few diners are out for a stroll around Hastings and Main looking for a nice place for dinner. “Getting people to cross the ‘DMZ’ [of the Downtown Eastside] is a tough one,” explains Lloyd-Kohls, adding that he wants potential patrons to feel “there is nothing dangerous about it.” The first challenge of the battle is simply for people to even know the diner is open at night now.

If the Ovaltine is to enjoy a restored evening popularity, it’s going to have to be a destination for people headed to and from nearby music venues or bars, or just looking for a fun and affordable night of diner fare and drinks.

Affordability is key for all involved in the Ovaltine, which is how they came to revamp the food and keep prices at or within a dollar of the most recent menu. With an emphasis on housemade components, the sandwiches, burgers, and breakfasts are fresh but not alienating to the current clientele, many of whom rely upon the Ovaltine for consistent and inexpensive eats. 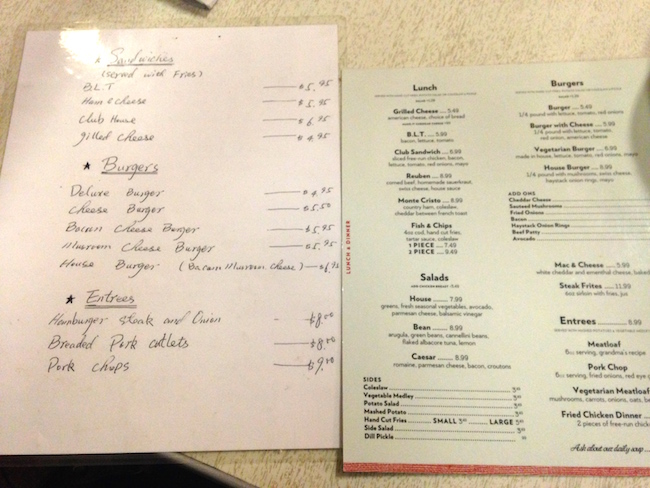 The new menu ticks all the boxes then, including being reasonably priced. A burger, fries, and a beer will run as little as about $10 at anytime. The house beer is a Coal Harbour Lager, which sells all day, every day for $4.79 an Imperial pint, and the Steak Frites teeters on the higher end of the price range, at a mere $11.99. Grace’s charming hand-written menu has largely been retired, but the guys say she will still make special favourites for loyal regulars by request.

The burgers range from basic to the more robust “House” offering, which includes bacon and fried onions. It’s the latter that Grace Chen sets down in front of me, insisting in a curt but motherly way that I’d best “eat now, talk after,” in order to get it while it’s hot. I happily comply. 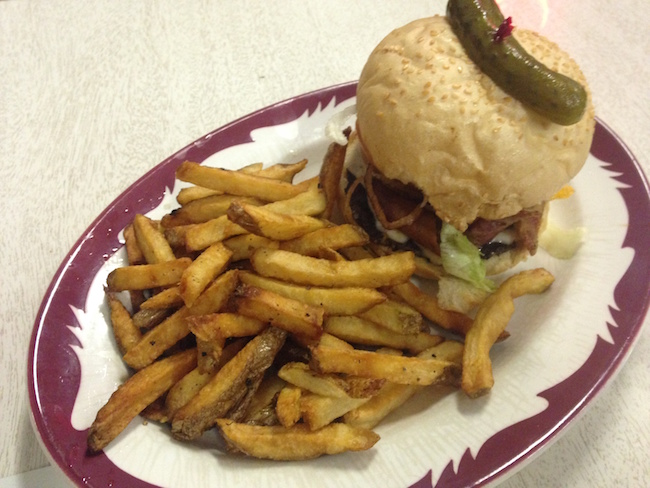 What is perhaps most striking, when the talking resumes, about Winfield and Lloyd-Kohls isn’t so much that they have been busing tables, but that they have an incredible respect for the space and the customers, and such an admirable vision for its future. Though we talk about the layers of wallpaper and how incredible it could be to have the glass pastry case that runs the centre of the room full of delicious treats once again, neither Winfield or Lloyd-Kohls is interested in sending the regulars packing, or doing anything to “gentrify” the space and nullify what it is or means to the community.

Most of what is left in the Ovaltine is original, or at least not anachronistically new. There are wishes to restore the wooden booths to more of their former glory, and possibly remove the drop ceiling, but so far the restaurant is just happy to have found a glass company that will make the piecrust edging on the wall mirrors for a song. 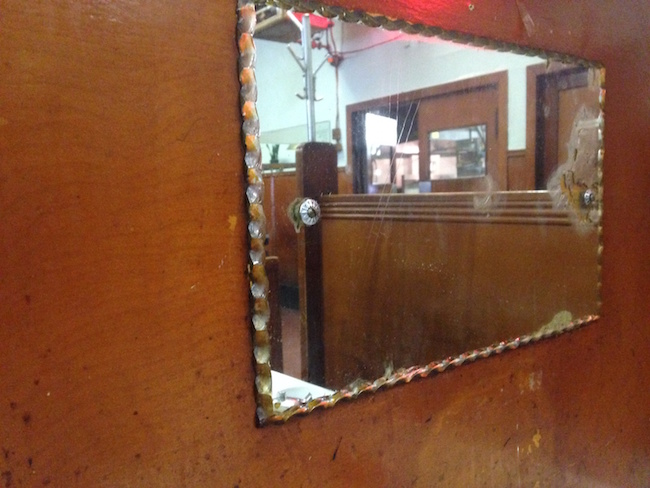 “I want it to be exactly what it was,” says Winfield. Even more exciting–for Vancouver, the DTES, restoration wonks, and anyone in search of a solid meal at a good price–is what the Ovaltine is, and is becoming.