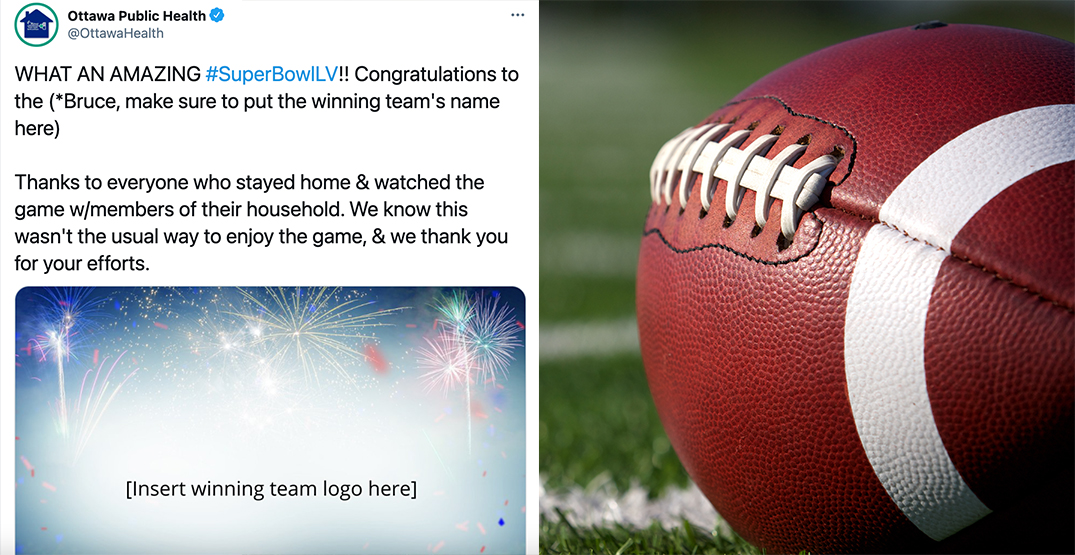 A viral Super Bowl tweet from Ottawa Public Health turned out to be a lesson in misinformation during the COVID-19 pandemic.

The tweet looked like a draft that somebody mistakenly published Sunday. There was a note for someone named Bruce to insert the winning team’s name, and a placeholder photo attached.

WHAT AN AMAZING #SuperBowlLV!! Congratulations to the (*Bruce, make sure to put the winning team’s name here)

Thanks to everyone who stayed home & watched the game w/members of their household. We know this wasn’t the usual way to enjoy the game, & we thank you for your efforts. pic.twitter.com/gKD53I2bB9

But it turns out the funny tweet wasn’t actually a mistake, and Bruce isn’t getting fired. In fact, Bruce doesn’t even exist.

“This seems like a great opportunity to chat about misinformation,” the health authority said in a subsequent tweet, before starting a thread explaining the hints present that could let readers know it wasn’t a genuine screw-up by Bruce.

Ottawa Public Health pointed to the redundancy of the placeholder image, and the signature showing the tweet was posted directly to Twitter instead of scheduled via Hootsuite.

(i) using that placeholder image makes no sense. None. It just seems like a redundant amount of work to have made it, no?

(ii) it’s posted via Twitter & a quick scan of our tweets shows we always use the same platform when scheduling (i.e. it was not a pre-scheduled tweet) (2/4) pic.twitter.com/Z09o3H85pS

People could have also clued in on the prank when Ottawa Public Health kept the tweet up and replied to those who saw it. If it was genuinely a mistake, the health authority likely would have deleted it, it said.

However, the health authority’s real social media staff said they were touched by the outpouring of support for fictional Bruce, who supposedly made an error.

Bruce, I had put together a care package for you. There’s a stress ball, an emergency hammer to smash your phone or computer screen, some essential oils and a Timmies gift certificate. Buy yourself a Boston Cream. You deserve it.

“Be critical of what you see online,” they said. “Misinformation has consequences that go far beyond the wellbeing of ‘Bruce’.”

Btw, we’re so touched by the outpouring of support for dear Bruce (who doesn’t exist, btw). It’s nice to see such kindness out there.

Be critical of what you see online. Misinformation has consequences that go far beyond the wellbeing of “Bruce”.https://t.co/r1bCarEZTk (4/4)

Ottawa Public Health used the widely shared tweet to ask people to practice COVID-19-related public health measures and to be careful of misinformation surrounding the virus or the vaccine circulating online.

Now that we have you all here, wear a mask and stay away from people.