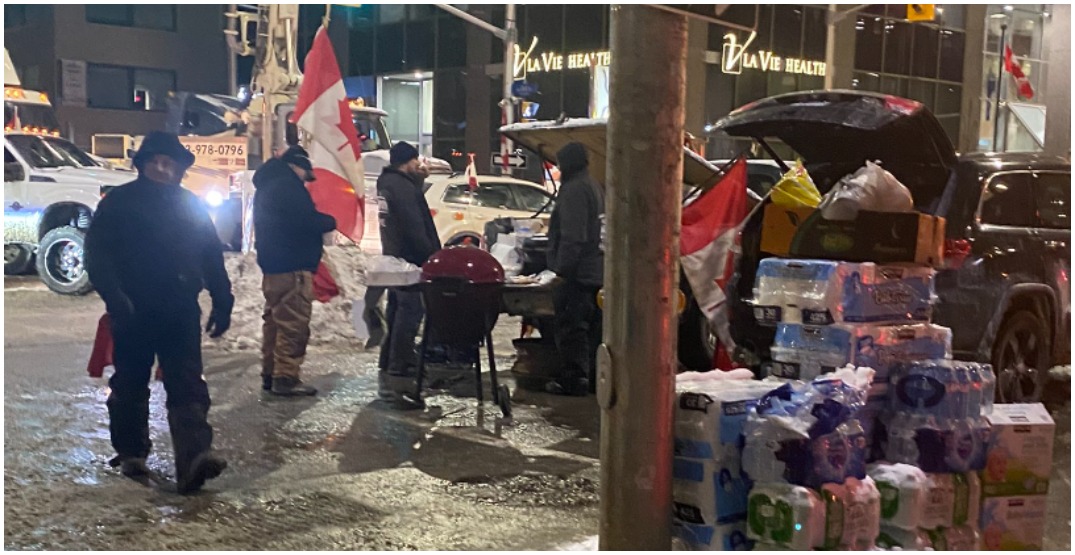 There were some strange sights to behold at the Ottawa “Freedom Convoy” on Saturday.

It started in the morning and lasted all day, attracting heavy traffic to the downtown core.

Tents were set up nearby to keep people fed, making for a combination of both hostility and hospitality on the scene.

There were even some games and toys for the kids — and adults.

Nothing is more enjoyable than having BBQ sausages in front of Parliament hill in the freezing cold. People are giving free food to everyone in Ottawa. Fake news will never show this to you. This is the party of freedom &. United we stand, divided we fall.#TruckersForFreedom pic.twitter.com/PEHB3fSkmH

The musky, sweet smell of barbecue hung in the air from the morning until the evening.

It started in the morning and lasted all day. Tents were set up nearby to keep people fed, making for a combination of both hostility and hospitality on the scene.

Where huge groups of people go, food tends to follow. A similar smell likely engulfed other Canadian cities seeing the convoy and counter-protests.

Corner of Slater and Kent. That’s a BBQ. Where do I report this to folks? #OttawaOccupation #FluTruxKlan #Ottawa pic.twitter.com/1yvEbYBUmU

Family friendly events and bouncey castles being set up in Ottawa for the kids as the Freedom Convoy enters the second week pic.twitter.com/1sscz5Kysp

The scene became even more reminiscent of a picnic, or a country fair, when somebody set up a bouncy castle and brought hay bales nearby for children to play on.

How many bouncy castles exactly there were remains unknown.

#FreedomConvoyCanada
Went to Freedom Rally in Ottawa and a hockey game broke out.
Only in Canada. pic.twitter.com/M6ZBoMRpGt

Protestors could also be seen playing hockey games in the street in live streams posted to social media.

It was a show of old-fashioned Canadian nationalism, just in a place you wouldn’t usually expect: The middle of an extremely loud rally.