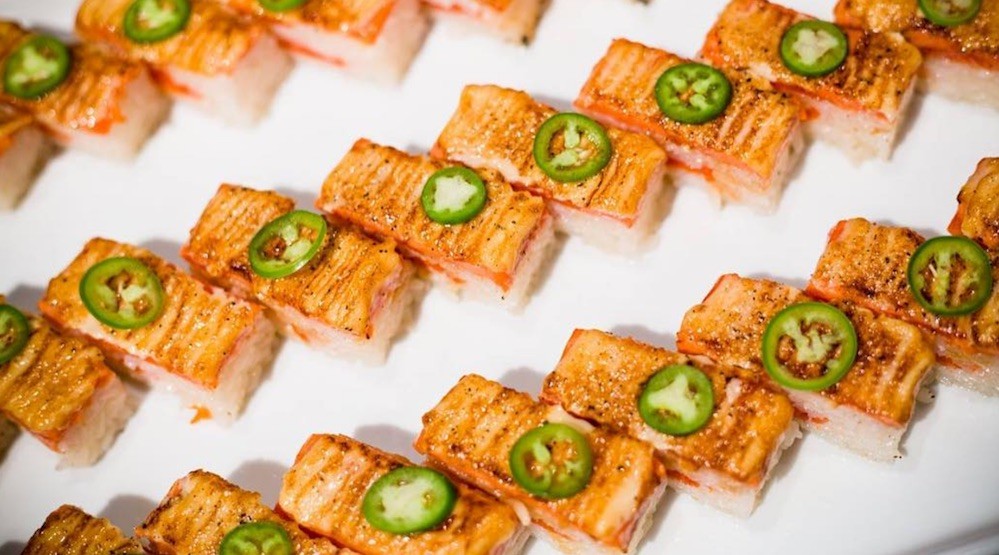 Oshi sushi (also known as pressed sushi, box sushi, or battera) is made by placing the ingredients in a box and pressing down on them.

This traditional sushi style comes from Osaka and is developed from the timeworn method of preserving fish by packing it tightly in boxes with rice. Oshi sushi is often served aburi-style – a technique of lightly searing the sushi with flames.

Here are eight places in Vancouver when you can enjoy oshi sushi.

Credited for introducing Vancouver to aburi sushi, Miku is one of the go-to places for oshi sushi in Vancouver and offers melt-in-your-mouth Japanese delicacies. Among their most popular dishes is the Aburi Salmon Oshi. Miku is located right by the waterfront so patrons can enjoy the heavenly cuisine along with a view.

Kishimoto calls Commercial Drive home and attracts a devout following; the restaurant is frequently lined up. Their enticing Salmon Oshisushi is one of their oft-ordered plates. All of their dishes are meticulously decorated so their oshi sushi is appetizing for both the stomach and the eyes.

Kitsilano’s Green Leaf Sushi is a small sushi restaurant making waves with their Aburi Platter of oshi sushi. Served on a wooden platter, the Aburi Platter takes about half an hour to order so plan accordingly. The platter comes with six different rolls (five oshi sushi and one roll), totalling 38 pieces of scrumptious sushi.

Located in Kerrisdale, Ajisai Sushi Bar serves up authentic, expertly-executed sushi. Their oshi sushi is super fresh and generously portioned. The restaurant is small, so it’s best to go early to avoid a long wait.

A quintessential neighbourhood joint, Sushi Loku is a no-frills sushi place that lets the food shine. Converted from a café, the restaurant offers a solid menu of appetizing oshi sushi and creative rolls that won’t break the bank

Another Yaletown destination for oshi sushi is Bistro Sakana. Much like the nearby Minami, Bistro Sakana offers innovative, West Coast-inspired sushi. Their Sockeye Jalapeno Aburi and Shiro Miso Toro Aburi are packed with flavour and freshness.

A Japanese izakaya in Kitsilano, Raisu is the latest sister restaurant of Suika, Kingyo, and Rajio (all three also offer oshi sushi). An alluring draw of Raisu is their Oceans Offerings box which is comprised of 12 square-shaped pressed sushi. But act fast – they only make 10 boxes a day.