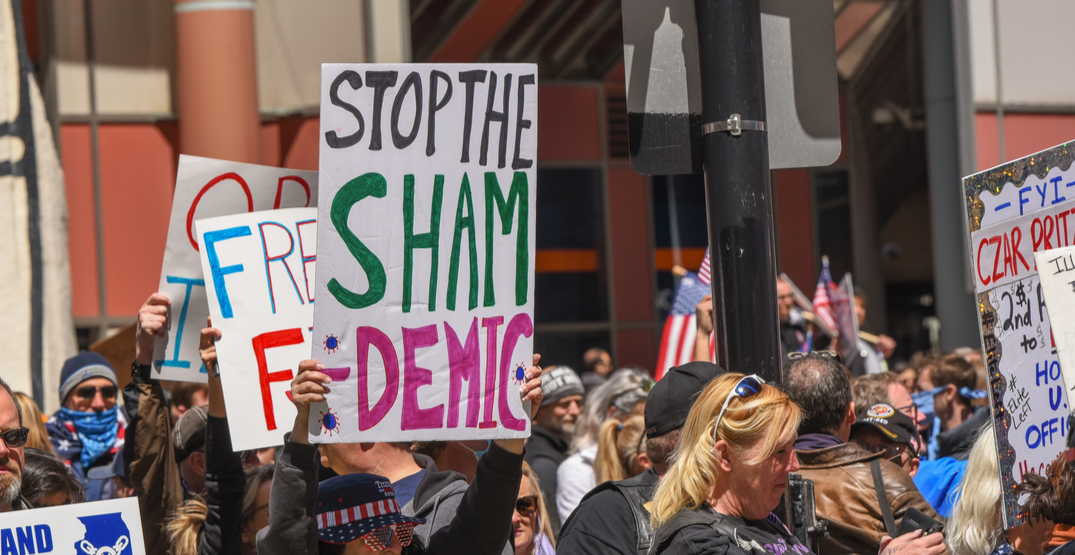 I seriously wish that I didn’t have to be writing this, but here we are.

The topic of face masks and their effectiveness at preventing the spread of COVID-19 has been one of contention ever since the pandemic began, but it has become especially divisive over the past month as restaurants and businesses reopen, coronavirus cases increase, and cities begin to see mandatory face mask bylaws enacted.

Montreal will be seeing mandatory masks starting July 27, Toronto has had a bylaw in place since July 7, and Edmonton’s City Council just made them mandatory for city-owned and run amenities, including transit, starting August 1.

The City of Calgary announced it would be making face coverings mandatory for indoor public places (with some exceptions) as of August 1, something that wasn’t exactly whole-heartedly accepted by many of my fellow Calgarians.

Which is honestly a little sad, because this global health crisis is so much bigger than any one person, and the only way to legitimately stop it is by working together to protect each other.

So yeah, those non-medically-exempt people who are refusing to wear a mask during all this? The so-called “anti-maskers”? They’re being selfish, no matter how you look at it.

Here’s the thing that I still think a lot of people don’t get about the whole wearing a mask thing: It isn’t about you.

That piece of fabric loosely attached to your face isn’t airtight, and it sure as hell isn’t going to protect you from the virus getting into your airways — especially if you aren’t wearing it right.

It isn’t supposed to.

What it is supposed to do is prevent your own potentially dangerous air particles from shooting directly out of your mouth towards whoever it is that you’re speaking to, because, believe it or not, you very well might have the virus even if you don’t think you do.

According to the Government of Canada, “when worn properly, a person wearing a non-medical mask or face covering can reduce the spread of his or her own infectious respiratory droplets.”

Asymptomatic coronavirus cases are a thing, and even those who do experience symptoms can be contagious long before they start feeling that sore throat.

The Pan-Canadian Public Health Network states that “COVID-19 is spread through contact with the respiratory droplets produced by infected individuals when they cough, sneeze, or even when they laugh or speak, including by individuals who have not yet or who may never develop symptoms.”

Obviously, your breath and air particles will escape a non-medical mask in one way or another when you breathe out — but masks at least partially prevent those particles from being blown directly outwards, and that’s literally all we’re hoping to accomplish, here.

Masks are not an end-all, be-all safeguard against the virus. I’m sure that those who are vocally against wearing them have plenty of research to cite showing that yeah, wearing a bit of cloth in front of your face isn’t going to completely stop the spread of this thing.

But again, and I cannot stress this enough, It. Isn’t. Expected. To. On. Its. Own.

Masks are merely a tool used to complement other public health measures, such as proper hand hygiene, physical distancing, and staying the hell home when you’re feeling sick. These all are small pieces at play here working in unison to protect the public health.

And that’s really where the whole selfishness thing comes in because it essentially boils down to this:

People are being asked to do this small, simple thing (ie, wearing a face covering sometimes in certain situations) not to protect themselves, but to increase the safety of others, and some people’s knee-jerk reactions are to find any excuse not to.

Sure, it’s everyone’s right to decide the degree that they care about the people around them, but if you’re the type of person who chooses that degree to be, well, zero, then yeah, I think there’s no contention to the fact that you fall under the following definition:

(of a person, action, or motive) lacking consideration for others; concerned chiefly with one’s own personal profit or pleasure.”

Don’t get me wrong, selfish is a completely legal thing to be, but don’t go pretending that not wearing a mask because you believe they’re ineffective is anything other than an attempt to justify your own lack of consideration for others.

Yes, wearing a mask is mildly uncomfortable, but I think that the real root of the contention seen here is simply that people don’t like being told what to do, no matter what that thing is.

But the people who are telling us to wear masks are also the country’s leading experts when it comes to public health, and they’ve been constantly stressing the importance of doing so.

“There has been a great deal of discussion around masks recently. It is something that I continue to discuss regularly with my counterparts in BC, Ontario, and across the country. I believe that masking is critically important and we’ve undertaken many efforts to normalize and promote the wearing of masks over the last several months,” she said.

“Let me be clear; I am strongly recommending that Albertans wear masks.”

“If you are watching this right now and don’t wear a mask, please start today. Do it for yourself and for everyone around you.”

Another argument that seems to be making the rounds is that the severity of the coronavirus is a lie perpetrated by the government and mainstream media in an effort to force the compliance of the masses because… the government wants everyone’s faces covered for some reason other than protecting public health, I guess?

Because governments around the globe want the economy to suffer, businesses to shut down, and billions of dollars be spent to support those who are struggling as a result?

I also get that there is a certain sense of self-worth tied to feeling like you outsmarted the system and avoided becoming one of the sheeple because it feeds into the idea that you’re more intelligent than the vast majority of people who are out there wearing masks. And of course, that feels nice.

But that’s just one more way that people who refuse to wear masks are putting their own personal pleasure (in this case, getting to feel clever) in front of the good of those around them.

And that, quite frankly, sucks.

Because no matter what you believe, or what articles you’ve read, or what The Man On YouTube tells you, the decision you’re making here about wearing a mask is not one you’re making for yourself; it’s choosing whether or not to protect the people around you.

Who, by and large, would prefer for you to be wearing a mask, thank you very much.

So if you have even a sliver of skepticism about the anti-mask rhetoric (isn’t skepticism about the information presented to you kind of the whole shtick that landed us here in the first place?) you might want to reconsider your stance, because it’s really not that difficult to wear a mask when out in public — just in case it turns out that our leading health professionals aren’t actually lying.

Doing so could, quite literally, end up saving someone’s life.