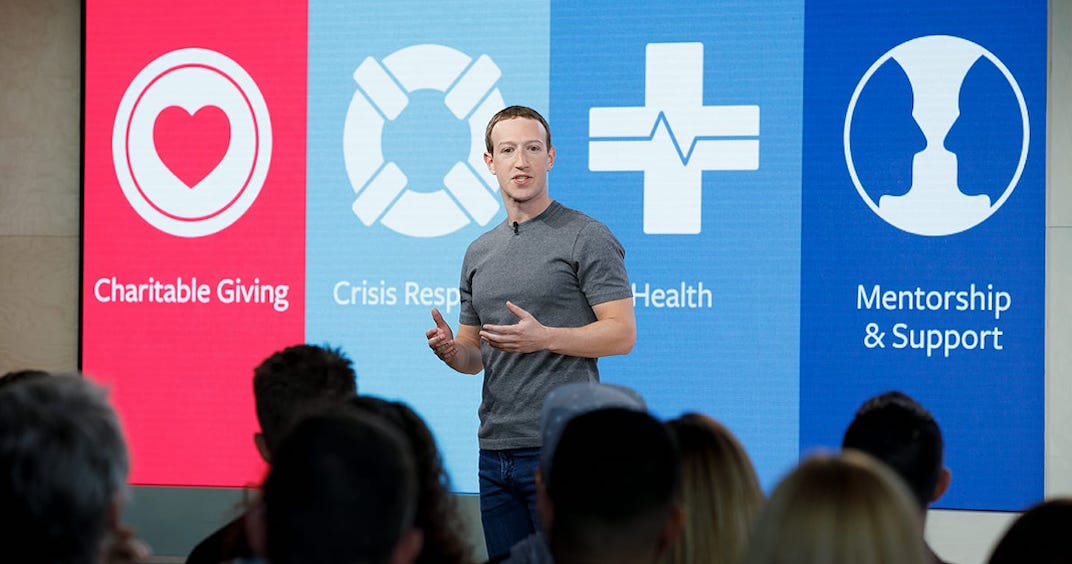 Political advertisements have long been a part of the political economy. These ads are projected on television screens, billboards, and increasingly online, all while influencing voters’ minds right up until election day.

What continues to be a struggle is firmly regulating these digital platforms which spread political ads online. And it should come as no surprise that Facebook offers one of the most profound cases of content being spread without verification, leading to a factory of memes, videos, clips and cartoons delivering memos to the masses, sometimes with questionable headlines or forgotten facts.

This week, Facebook’s CEO Mark Zuckerberg spoke about freedom of expression at Georgetown University. During his speech, he addressed transparency and Facebook’s decision not to ban the use of political ads on its platform.

“Given the sensitivity around political ads, I’ve considered whether we should stop allowing them altogether,” he told the crowd of students. “From a business perspective the controversy is not worth the very small part of the business that they make up.”

Translation: Zuckerberg doesn’t think Facebook should be policing politicians and that it is difficult to decipher what issues (like women’s empowerment) should or should not be accepted free game for advertising online, so it’s best not to hold strong censorship rules.

Earlier this month, Facebook allegedly admitted that it does not fact-check political ads online. And if that is the case, what does fact-checking look like with other types of ads online? Are political ads in a tier of their own, or should they be viewed just like business ads? Who’s ironing on the credibility?

Toronto business lawyer Sam Posner specializes in licensing, contracts and intellectual property cases, and said there’s definitely crossover between the two types of ads, particularly with the strategy and how an image is sold to Canadians.

“[Like political parties], many businesses also try to sell a vision as a marketing technique. Take buying a computer, you’re not just buying it, but you’re ‘thinking different’,” noted Posner, who adds that business advertisements sell goods or services and political ads see parties selling their vision for the leadership of the country.

“Where it becomes slightly less straightforward is in attack ads that don’t speak to the virtues of the advertising party, but serve only to try to create negative associations in an audience, and thereby elevate that audience’s impression of the advertising party, relatively speaking,” he said. “You see this less often in a business context, however, but it does still happen — think Pepsi and Coke.”

On June 13, 2019, new provisions were added to the Canada Elections Act (CEA) when it comes to online platforms and the use of registered ads. Elections Canada defines an online platform as an “internet site or internet application whose owner or operator, in the course of their commercial activities, sells, directly or indirectly, advertising space on the site or application to persons or groups.”

“If regulated ads appear without being included in a registry, an investigation and even prosecution could take place, depending on the circumstances,” said Elections Canada.

Following the new provisions in June, advertisers were able to run ads on platforms like Twitter, but not ones that directly promoted a candidate. When the election began, the ad registry came into effect.

As was first reported last month, Elections Canada was spending $150,000 on advertisements used on Facebook, with nearly a half of the sum coming in since the start of the writ period, which was Sept. 11. At the time, Elections Canada said that the “electoral agency plans to spend about nine per cent of its total election advertising budget on social media alone.” The report also notes that on social media “that works out to a planned spend of $171,000 on a voter information campaign in the pre-writ period.”

While online platforms are defined in legislation such as the Canada Elections Act, a universal definition continues to be loosely recycled, but not truly authorized. But one thing is certain: Facebook generates revenue from advertisements, which makes it a business.

“Is it a content company? An internet company? A media company? It’s all of those things one way or another, and selling ads is obviously a core revenue stream they will go to the wall to defend,” said Posner. “In that sense there are strong parallels with all other companies that have that as a core revenue stream, so newspapers, television, the Yellow Pages.”

Posner, who’s handled the convergence of media ethics and online governance before as an in-house counsel for Entertainment One (eOne), said Canadians need to be critical and judge the “virtues of the platforms and the people”, knowing there is not a perfect candidate or strategy. He said “ads tend to circumvent this impulse” and “Facebook creates an echo chamber in that they only show you ads and posts from your contacts that Facebook thinks you are likely to agree with.”

While Canadians intend to read policy platforms, follow online sessions and attend rallies, Posner said, “seeing an ad can short circuit that intent.” This can cause impulsive decision-making and knee-jerk reactions.

From a legal perspective, Posner said online political ads don’t really require additional consideration than what’s seen with other kinds of ads, except for platform compliance.

“For attack ads, the issue around defamation remains essentially the same in that you cannot say something that is untrue and causes damage. If it’s not the party itself advertising, but a viral meme, for example, it can be very difficult to enforce any action against it or the users posting it, especially if the publisher, like Facebook, can’t pin down something egregiously offensive or illegal in it,” he explained. “Also, if removed it might set a precedent that would cause harm to their core revenue stream.”

A spokesperson from Elections Canada reiterated to Daily Hive on Friday that Elections Canada administers the Canada Elections Act as it was enacted by Parliament. Further, that the “decision to accept political ads or not is entirely up to the online platforms.”

The problem is that there are too many ways to capture, tease, trick and terrorize using content online. And this can be done without having to pay any real price for it, whether that price is monetary or punitive, or both.

This week, Instagram Canada, which is part of the Facebook family, put together an “I Voted” sticker for Instagram Stories, encouraging Canadians to vote and to celebrate their voting experience. Each sticker also links to Election Day information. And, on Oct. 21, instagrammers will see a “We Voted!” story at the beginning of their Stories bar, and when friends post their story with the “I Voted” sticker everyone can see the update by clicking the “We Voted!” story.

Whether users will use the platform to push their followers to vote for a specific party or not, that’s another story.