Beginning on Monday, October 5, TransLink’s fares for Metro Vancouver’s bus network will undergo a major change: all travel on buses across the entire region will only cost a one-zone fare.

The fare switch was first announced in early-August to allow the transportation authority to proceed with the full implementation of the Compass Card fare payment system.

Latency and reliability issues with the Compass Card readers onboard buses, particularly the ‘tap off’ requirement, have delayed the launch of the system, which was originally slated for spring 2013. The ‘tap off’ requirement has also been an issue on packed buses with drivers reporting extra lengthy waits for passengers to ‘tap off’ as they exit.

Due to the issues, bus riders will only be required to ‘tap on’ beginning on October 5 – the ‘tap off’ action is not required for buses.

However, cheaper bus fares could mean a big increase in ridership on some transit services that are already struggling to cope with existing demand. The transportation authority maintains there will be no increases to transit services due to the ‘No’ result in the recent transit plebiscite.

TransLink has noted that it does not expect to lose any revenue as the increase in ridership will create a net balance.

Here are 7 practical things you need to know about one-zone bus fares beginning on October 5:

1. Bus anywhere with a one-zone fare

All bus travel across the region through any of the existing current three-zone zones will cost a one-zone fare beginning on Monday, October 5. A one-zone fare is $2.75 adults and $1.75 for children, seniors and HandyCart holders.

The one-zone fare is in effect for all bus services, including express buses, community shuttles and HandyDart services.

For example, it will cost only a one-zone fare to travel on buses that cross the Lions Gate Bridge and the Fraser River bridges.

The existing multi-fare zone system will still be in effect for SkyTrain, SeaBus and the West Coast Express commuter train.

This means passengers who have paid a one-zone fare and intend to transfer onto SeaBus or travel across multiple zones on SkyTrain need to pay multi-zone fares. New fares are not required, but passengers with a one-zone fare must ‘upgrade’ their proof of payment at any ticket vending machine located in SkyTrain stations and SeaBus terminals.

One-zone monthly passes for travel on all buses will come into effect on October 5. For multi-zone travel, upgrade your fare with an AddFare to cover any additional zone travel on Thursday, October 1 and Friday, October 2.

While it would make more sense to implement the changes on October 1, TransLink has previously stated that it needs the weekend dates to change over to the new system.

Regardless of whether transit users travel on buses, SkyTrain or SeaBus, the existing policy of a 90-minute transfer window between services still applies.

Transit users who only intend to use bus services can purchase a one-zone monthly transit pass, which is $91 for an adult and $52 for children, seniors and HandyCard holders. A two or three-zone monthly transit is not needed for bus travel, but the current multi-zone fare rates still apply for SkyTrain, SeaBus and West Coast Express.

Travel on all of TransLink’s services after 6:30 p.m. on weekdays and during all hours on weekends and holidays will still be a one-zone fare for buses, SkyTrain and SeaBus.

Compass Card holders will be required to ‘tap in’ only on buses upon boarding beginning on Monday, October 5.

However, cardholders who use SkyTrain and SeaBus are required to ‘tap in’ and ‘tap out’ on the fare gate card readers located at the entrance of the stations and terminal buildings. The fare gates will remain open for several months, although some fare gate paddle doors will be closed for testing purposes. 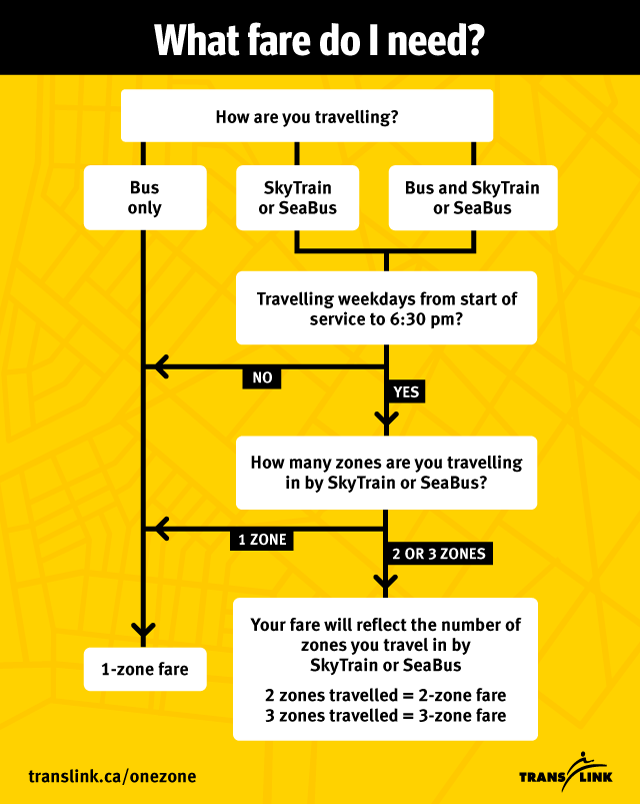