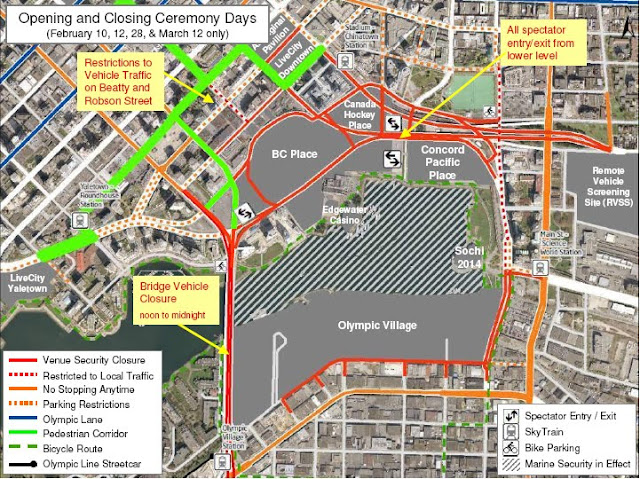 (source: Vancouver2010.com)
By now a little bit of panic has set in for many residents of Vancouver. For the most part its the residents who commute to and from Downtown on a daily basis that are the most worried. Well on February 10, 12, 28 and March 12, 2010 the commute will probably be the roughest and you are stubborn (or brave, however you want to look at it) enough to still want to drive, this map is for you. Continue reading for more information on road closures and limitations for the Vancouver 2010 opening and closing ceremonies.

The Olympic Opening and Closing Ceremonies in downtown Vancouver on February 12 and 28, 2010 will be two of the busiest days of the 2010 Winter Games and will bring 100,000 participants into the downtown core including performers, athletes and officials, ticket holders, workforce, media and broadcasters.

The Olympic and Paralympic Transportation Team (OPTT) is responsible for transporting these groups to BC Place stadium from various locations in Metro Vancouver and the Sea to Sky regions. These groups are being transported over a period of 12 hours using roughly 1,500 cars and 500 motorcoaches.

There will be a full dress rehearsal on February 10, during which time the comprehensive transportation plan will be tested. The same plan will also be implemented for the Opening Ceremonies of the Paralympic Winter Games on March 12. [source] 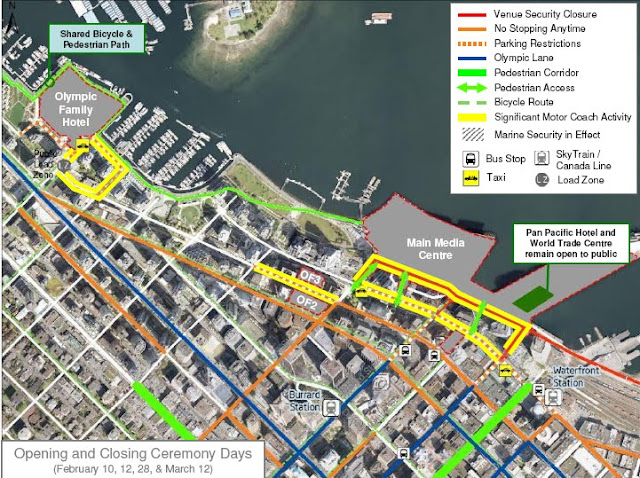 To ensure successful Ceremonies, some specific temporary changes to the road network in downtown Vancouver will be put in place, in addition to the extensive plans shared publicly since November 2008.

The following streets will be closed from noon to midnight on February 10, 12, 28 and March 12:

o Cambie Street bridge (all lanes closed to vehicle traffic, however pedestrian and bike access will be maintained via the east and west sidewalks)
o Beatty Street (between Smithe and Georgia)
o North sidewalk of the 1100 block of West Hastings, in front of the Renaissance Vancouver Hotel (4 pm to 5:30 pm)

On February 10, 12, and 28 there will also be a significant amount of motorcoach activity including loading, unloading and staging on Coal Harbour Quay, Canada Place and West Cordova from noon to 11 pm.

Pedestrian access for all businesses and residences on these affected streets will be maintained. [source]

So my advice would be to not drive, but to each their own. If you plan on driving during the Olympics check out our comprehensive road closures and road plan maps.