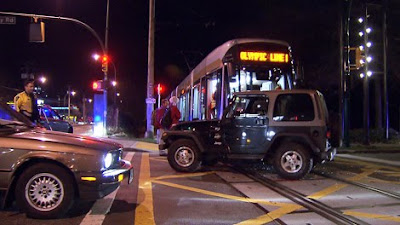 Well this was bound to happen sooner or later and last night a collision between a Jeep and the Olympic Streetcar occured . Luckily no one was hurt and judging from the angle of the crash it looks as though the driver of the Jeep was trying to be a hero and beat the streetcar. Although, I am know ICBC expert, so what the hell do I know.
I know supporters of LRT think an LRT system down Broadway is a great idea. Yes slow moving transit down the middle of this city’s busiest streets is the way to go. Just imagine the delays a crash on Broadway would cause and with the way Vancouverites drive that would be a daily occurrence. So…no to LRT down Broadway, even hardened LRT supporters can’t argue this, well at least not rationally. [ctvbc.ca]