It’s finally here! The best hockey tournament in the world begins on Wednesday with a pair of games (Sweden vs Czech Republic, Switzerland vs Latvia), beginning at 9am PST.

So how is this tournament going to shake down? I asked some of the Vancity Buzz hockey writers (Omar, Steve, Jas, Ian and Ryan) to find out. I also asked Mr. Vancity Buzz (aka Karm), purely because of his celebrity status. I also asked myself because, well, I’m the hockey guy.

Who will win Pool A (Russia, USA, Slovakia, Slovenia)? 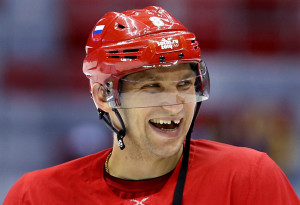 Rob:  The Russians are pissed. Not only are they angry that they didn’t win gold in 2010, but they’re even madder that they lost in embarrassing fashion to Canada in the quarterfinals. Don’t believe me? Check out this interview with the normally mild mannered Pavel Datsyuk. Russia is motivated, they’ll win group A.

Omar: Many are calling this the “group of death” and everyone assumes it’s because it includes Russia and the U.S. – two gold medal favourites. But no, the name has actually been given because any team that threatens to beat Russia in the standings will disappear mysteriously. Yeah, after the snipers get to the U.S. squad, Russia will take it.

Steve: Has to be Russia taking Group A. Although the USA will challenge, not disappointing Putin would be enough to motivate any team to victory.

Jas: Because it’s not too far off thinking that the combination of Putin and the entire KGB have informed the entire Russian roster that their families are in danger if they don’t make it out of the group – I’ll take Russia to win it, with the US a very close second.

Ian: The KHL contingent comes back to bite Russia and the USA wins group A.

Ryan: USA. The US team has far more depth when compared to Russia, which will give the Russians fits during their pool game.

Karm: Russia. This was a toss up between the U.S. and Russia. Being that the games are in Sochi, I think Putin will pay off the referees to make sure they come out on top.

Who will win Pool B (Canada, Finland, Norway, Austria)? 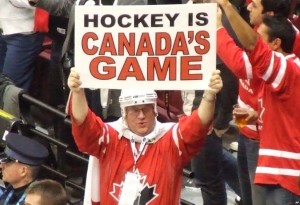 Rob: By now you’ve probably heard all about Canada’s struggles early on in tournaments and their struggles on the big ice surface. It’s also worth noting that Finland always seems to overachieve in the Olympics. Ignore all of that. Finland holds the advantage in goal, but that’s it. Canada is clearly the top team in this pool and should come out on top.

Omar: The one X-factor in this pool could be Finland’s goaltending. Tuukka Rask, Anti Niemi, and Kari Lehtonen have the power to slip into brick wall mode at any time. Unfortunately for them, the only way they can stop Canada’s snipers (funny how this word has such a different meaning in our country) will be if all three are allowed to play at once. Yes, I’m saying Canada will win.

Steve: It’s really down to Canada or Finland. I’m actually going to throw my country under the bus and say Finland takes the group. Canada will have to contend with a big ice surface, a roster with many question marks and coming off of a gold medal win the previous Olympics. Sounds familiar, doesn’t it?

Jas: Finland wins the group. Canada has not finished at the top of the their group since 1998. With so much skill on the Canadian team, it will take a few games to get the chemistry right. The Finns are underrated and will be a tough defensive team throughout the tournament.

Ian: Canada cruises through a gift of a grouping.

Ryan: Canada. With Finland losing Koivu and Fillipula to injury, Canada will coast through their group without an issue.

Karm: Canada. I feel like their pool is the easiest of the bunch. As long as the goaltending is solid, there is no reason Canada shouldn’t come out on top. 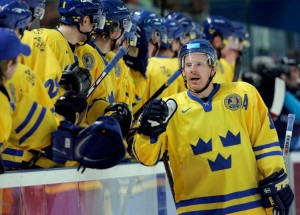 Rob: The Czech Republic have major questions with their goaltending and while I respect the Swiss, Team Sweden is the class of this group. The X-Factor for Sweden will be their power play, run by Erik Karlsson.

Omar:  It’s tough to figure out who’s going to win this pool because why should I spend any time looking at a group that doesn’t have Canada, the U.S. or Russia in it? Umm… go with Sweden.

Steve: Despite losing Henrik Sedin and Johan Franzen to injuries, I just can’t see the Swedes losing to a team that has Petr Nedved on it. Switzerland should make things interesting though. Sweden.

Jas: Sweden. I have to admit picking any team to win that has Alex Edler potentially scoring into their own net is a bit of a gamble. Henrik Lundqvist will have to stop pucks from six players when Edler is on the ice, but I think he is up for the challenge.

Ian: The Czech Republic will surprise and Peter Nedved will light it up early!

Ryan: Sweden has too much high end talent to not take their pool. The loss of Franzen and Henrik Sedin likely will catch up to them in the medal rounds, but shouldn’t cause any issues during the pool play.

Karm: Sweden. Note: when it’s your website, you get to add as much or as little explanation as you want.

Who wins the gold medal and which player will be the MVP? 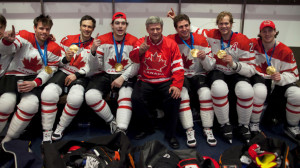 Rob: Russia scares me the most, but I think Canada will beat them in a thrilling gold medal game. Canada’s ability to roll four lines and six defencemen is unmatched. Sidney Crosby (he is the best player in the world after all) will be the MVP.

Omar: Three words: large ice surface. More words: Canada will adapt to it, but the Americans won’t (because they’re dumber). Sweden will have a chance to win because Henrik Zetterberg and Daniel Alfredsson will remind Daniel Sedin how to shoot. Canada will beat Sweden in the gold medal game. I have a feeling that goaltending is going to be huge in this tournament, Carey Price will be the MVP.

Steve: Finland. Goaltending will steal the show as the Finns defeat the host Russians in the final. Putin will be so pissed off. The MVP will be Rick Nash, but only because I spent an entire blog post trashing his inclusion on team Canada.

Jas: After being so close in 2010, USA gets it done in Sochi, beating the host Russians in the gold medal game. Patrick Kane will be the MVP.

Ian: Team Canada is just too deep and rolls through the tournament, beating Team USA in the final (again). The player everyone loves to hate, Corey Perry, is clutch for Team Canada and is their MVP.

Ryan: Canada has the least amount of questions and won’t have to be perfect in order to win. They’ll beat Russia in the final and Sidney Crosby will be the MVP.

Karm: With the amount of skill on the team there is no reason for Canada not to win the gold. They will defeat Russia and Martin St Louis will make the most of his opportunity to represent his country and be the tournament MVP.