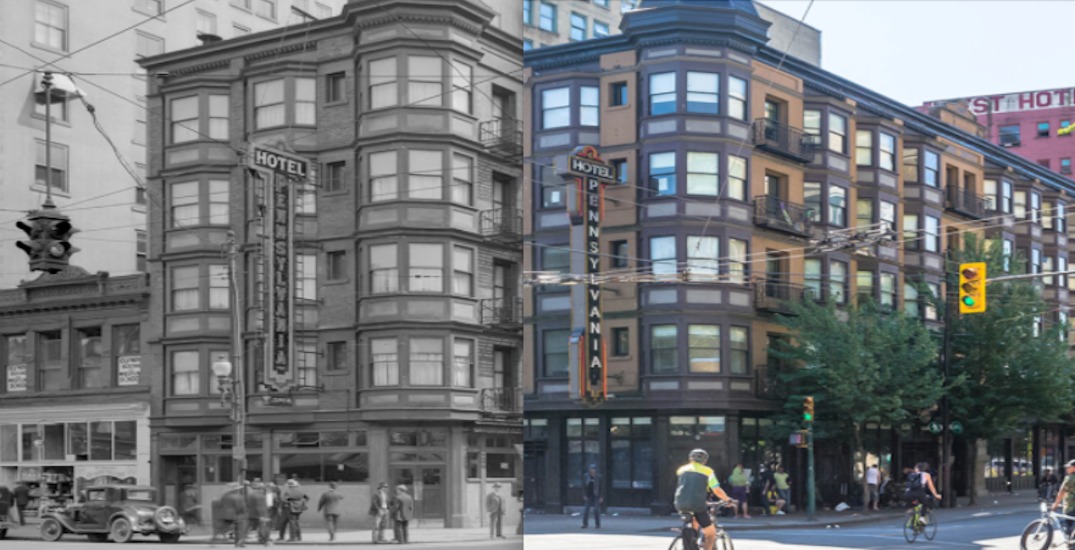 Have you ever wished you could go back in time to discover what some of Vancouver’s popular landmarks and buildings looked like years ago?

John Bentley, a local architect and real estate photographer, has made it possible with his website Vancouver Now and Then.

Bentley started the website as a side-project when the COVID-19 pandemic began. He collected over 100 photographs of Vancouver buildings overlaid onto historical photos of the same building. 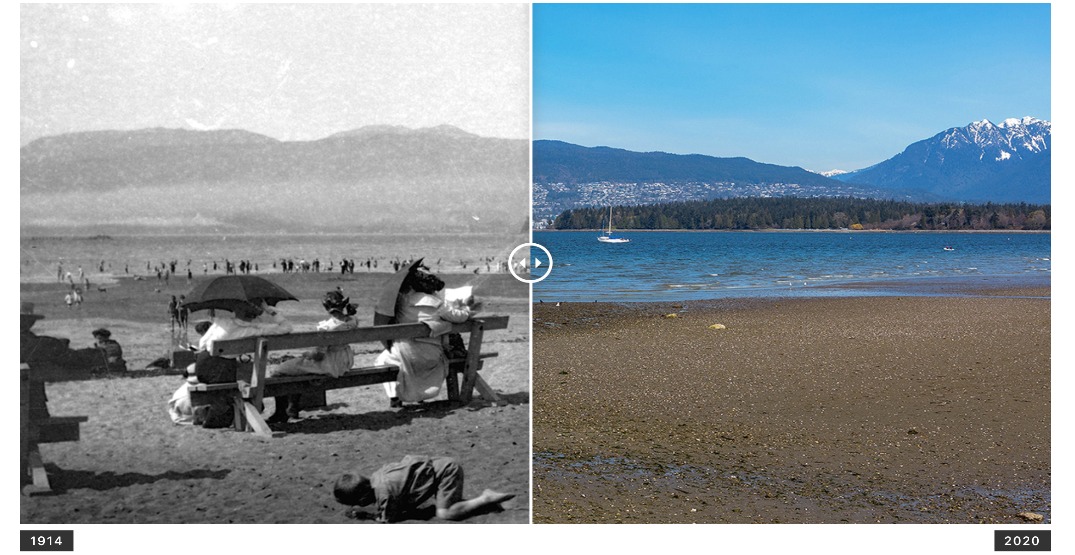 “I shot a house in Shaughnessy a few years ago when it came up for sale. Last year when I was going through the Vancouver City Archives, I came across an old photo taken 100 years ago of the same house, taken from the same spot where I took mine,” Bentley told Daily Hive Urbanized.

“So I put the two images together and put it on my blog. Then I went looking through the archives for more old photos of buildings that are still standing, and eventually asked a friend to help me build a map-based website for all of them.” 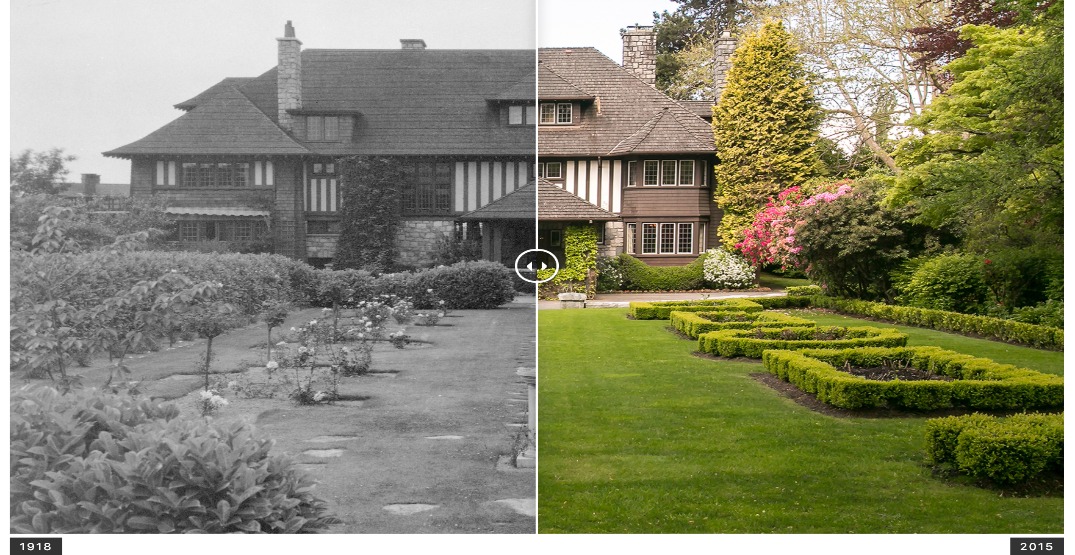 Bentley explained that most of the old photos are public domain pictures from the Vancouver City Archive.

“I started doing this early last year when work was slow for me. I just started riding around town on my bike and taking pictures of old buildings, and I’ve been doing it ever since.” 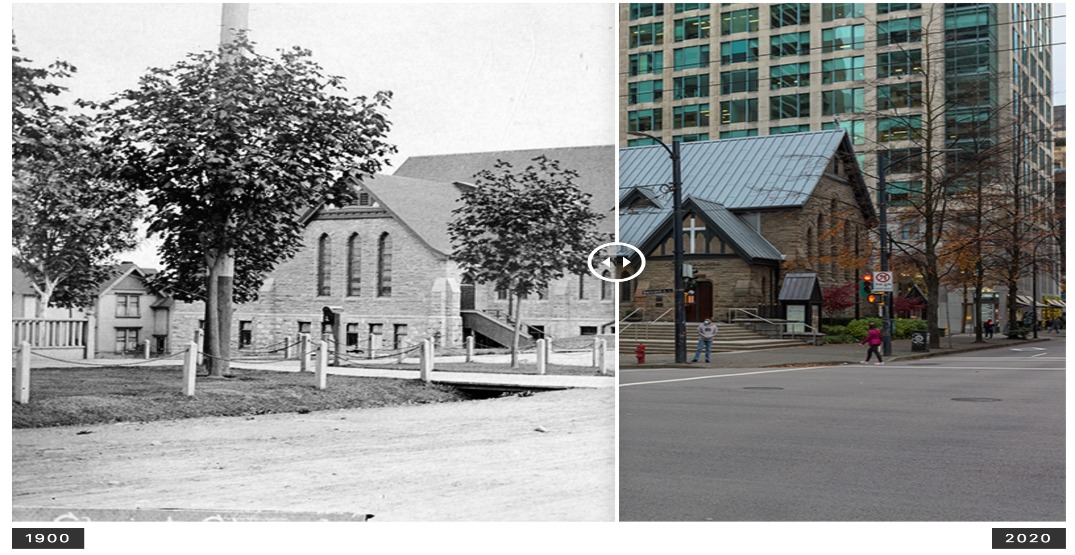 Bentley states that 414 Alexander Street “was probably the biggest surprise. It’s very old, the 10th house to be hooked up to the city’s water supply. It is the same house but looks nothing like it used to.” 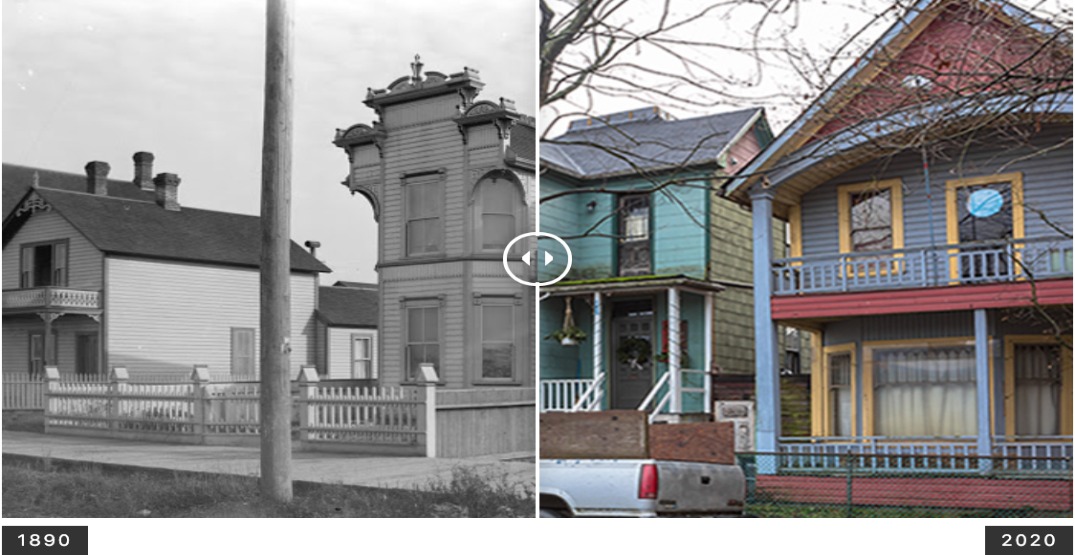 Another surprise was this building at 2818 Granville Street, where you can see a home peaking out over Black Goat Cashmere and Queen Flower Shop.

“I have been on this street hundreds of times and never noticed it sticking up over the stores,” explains Bentley. 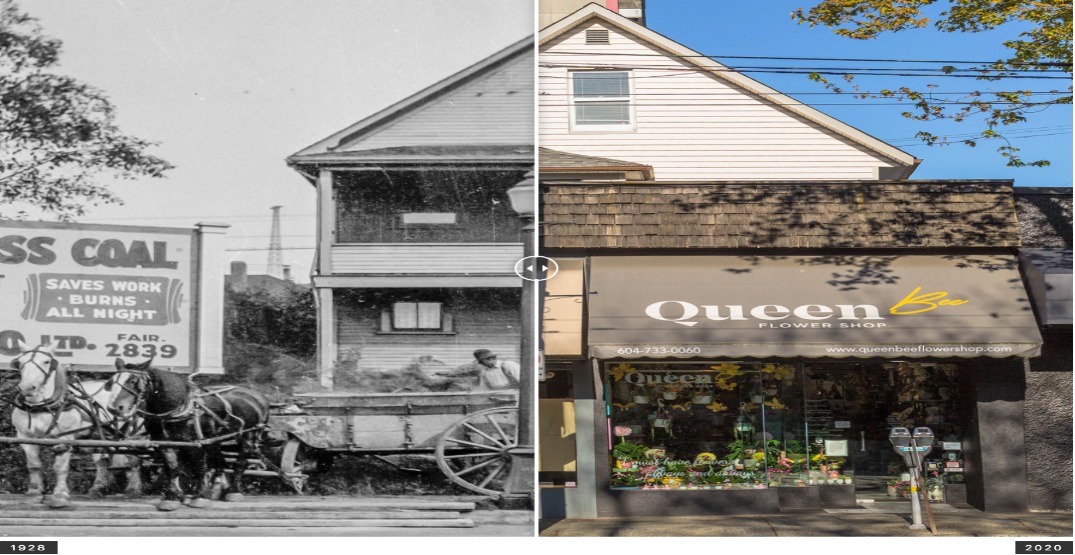 Astoria Hotel in the Downtown Eastside has also changed over the years. It first served as an apartment building and was transformed into a hotel in 1950. It is now a Single Room Occupancy (SRO) building. 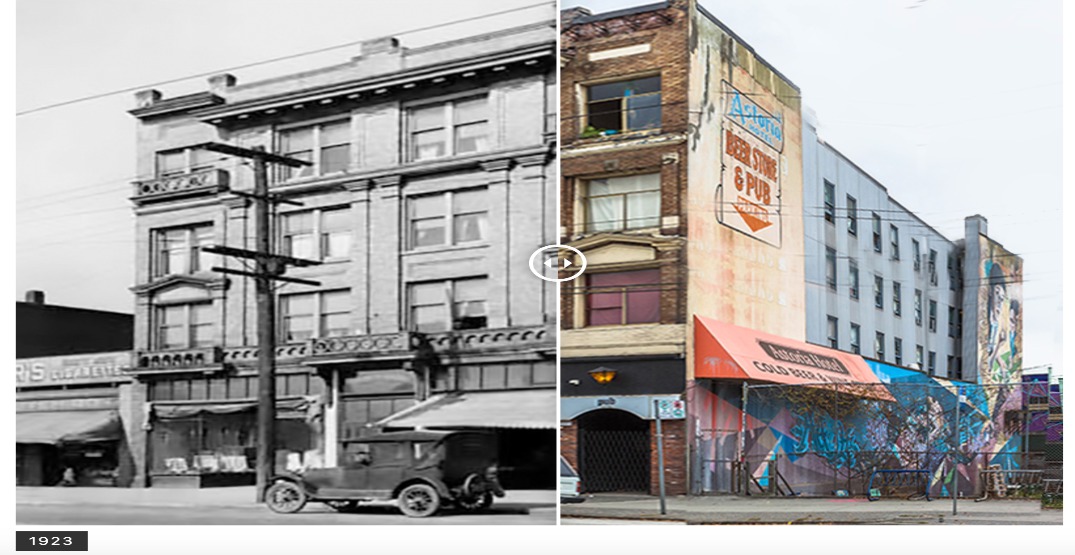 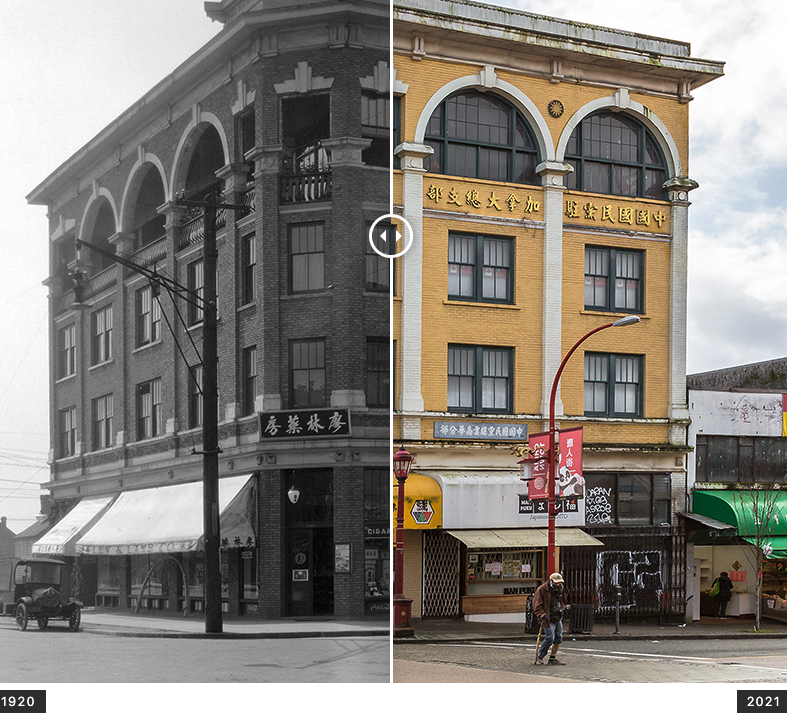 Many might not know the interesting backstory of the old Royal Bank of Canada building on 666 Kingsway.

According to the Vancouver Now and Then website, the old photo on the left was taken in 1936 for a court case, as robbers rented out the store next door, claiming they were growing mushrooms. As it turns out, they were actually digging a hole under the dry cleaning building in an attempt to rob the bank. 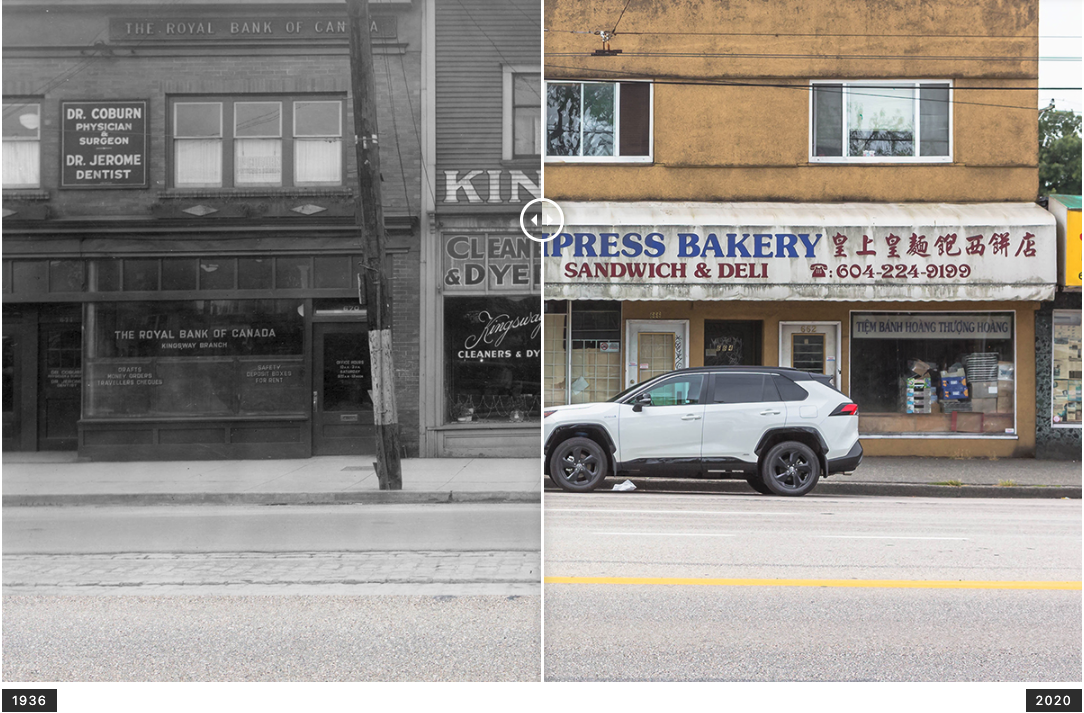 The Yale Hotel is one of Vancouver’s oldest surviving buildings. Completed in 1889, it served as a source of nightlife for blue-collar workers, and it is now a western-themed bar. 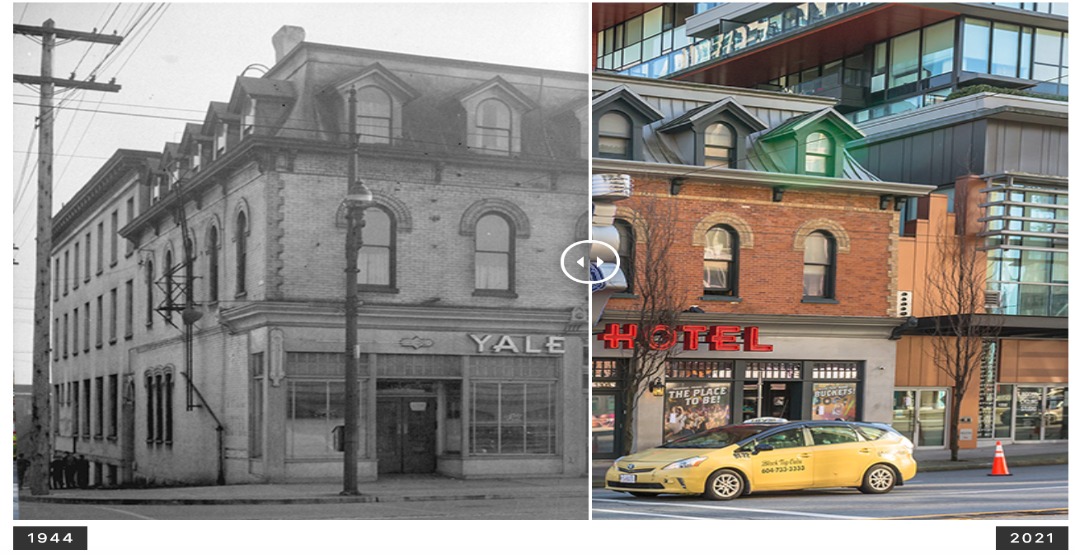 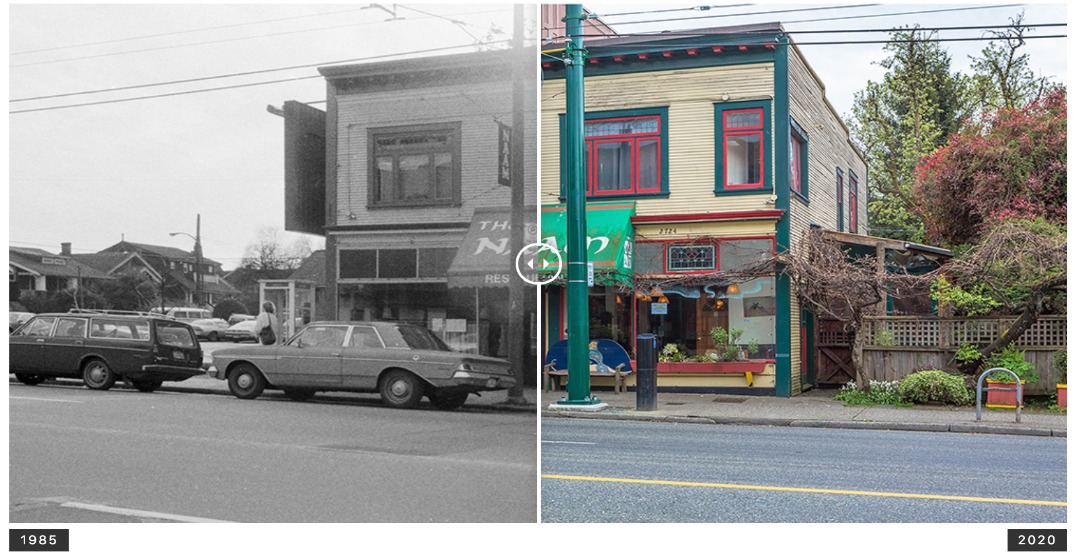 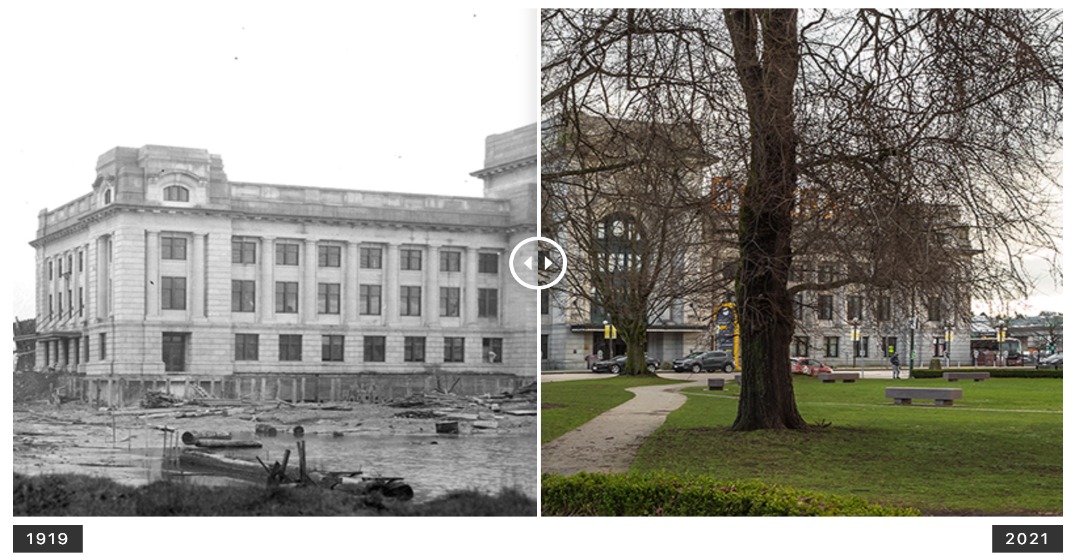 Cambie and Cordova used to look much different back in 1899. You’ll no longer find trolleys travelling on the road, as the street is now home to trendy shops and cafes. 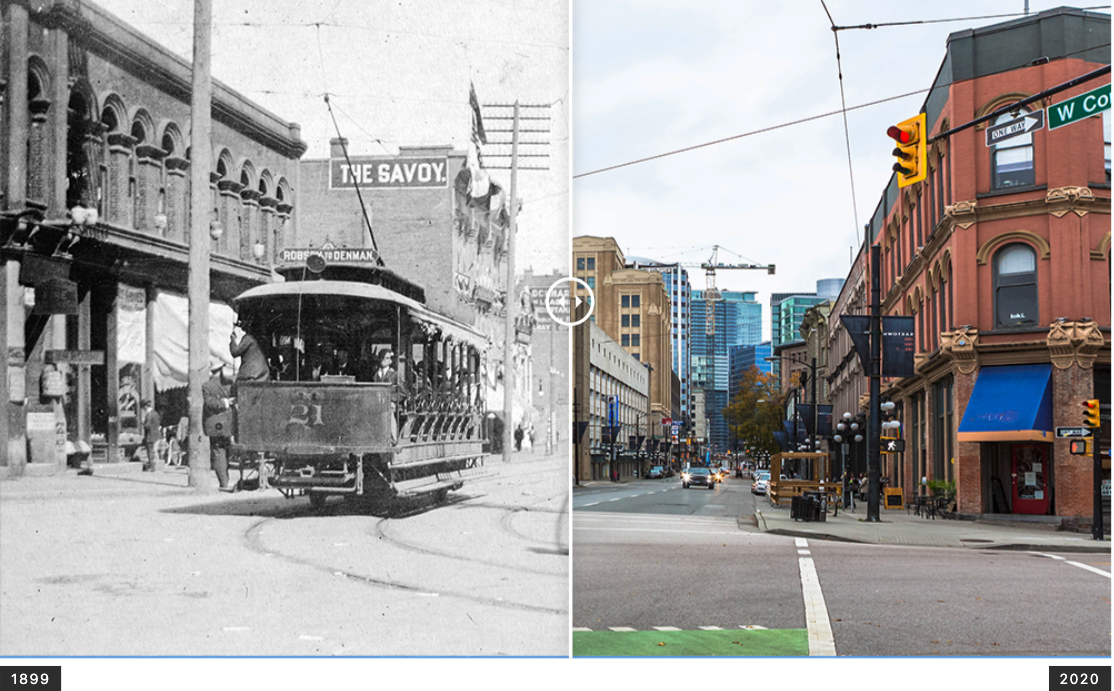 Check out all of Bentley’s comparisons of Vancouver Now and Then here.