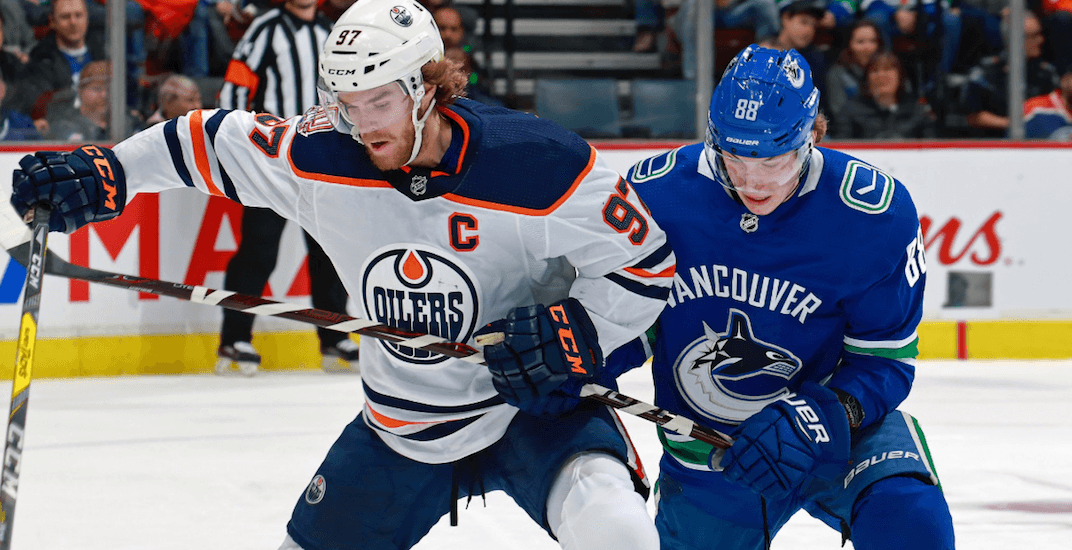 It was mission accomplished for the Vancouver Canucks on Sunday.

Playing their second game in as many nights on home ice, they came away with a second straight win.

Not only did the Canucks beat the Edmonton Oilers 4-2, they frustrated them.

Head coach Travis Green shuffled his lines to match up against Connor McDavid. He put together a line of Bo Horvat, Loui Eriksson, and Antoine Roussel, along with a defence pair of Alex Edler and Chris Tanev for one soul purpose: slow down McDavid.

McDavid had just one shot on goal and didn’t get on the scoresheet until the final five minutes of the third period.

The Oilers have been a much-improved team since hiring Ken Hitchcock as head coach, carrying an 8-1-1 record into Sunday’s game. But they’re still a one-line team, so if you stop McDavid, you stop the Oilers.

Edmonton had just 22 shots on goal in the game.

Meanwhile, the Canucks made the Oilers pay on the power play, scoring on three of their five opportunities with goals from Edler, Brock Boeser, and Elias Pettersson:

A third #Canucks power play goal, this time off the stick of @_EPettersson! 🎯 Good guys up two with 12:45 to play in the 3rd. pic.twitter.com/EQR2dF4jcG

When asked about the discrepancy in power plays — the Canucks had five compared to just one for the Oilers — Hitchcock pivoted.

“I’m not going to comment on the penalties, but the stuff that bothers me is what’s happening to [McDavid],” Hitchcock told reporters, campaigning for his star player. “That really bothers me. We’re a league that’s supposed to showcase our top players.

“The tug of war on him was absolutely ridiculous today. That’s a little bit discouraging to be honest with you. I can see the whacking, hacking going on when he’s got the puck, but to me it’s all the stuff behind [the play] that doesn’t allow him to showcase his speed. If that’s what we want, then that’s fine. I think it’s a real disservice to a player like him.”

“He’s not allowed to play give and go. It’s give and hold.”

Unsurprisingly, Canucks head coach Travis Green saw things a little bit differently. He was thrilled at the way his team played, and quite pleased with the reffing as well.

“I thought the refs did a great job tonight,” Green told reporters in his post-game media conference. “They let the teams play… I thought it was a well-reffed game.”

Though the Canucks had a 5-1 advantage in power plays, three of the penalties given to Edmonton were automatic — they called twice for shooting the puck over the glass in their own zone and received a penalty for an obvious too many men on the ice call.

“I don’t know what [Hitchcock] would be talking about. I thought our guys were skating… I thought Horvat’s line did a fantastic job. [Tanev and Edler] are two of the better defending [defencemen] in the league. I thought the refs called a real good game.”

Of the players matched up against McDavid, only Roussel has a reputation for stepping over the line. Horvat, Eriksson, Edler, and Tanev can all be described as honest players.

“That was as good a game as I’ve seen out of a lot of guys tonight,” Green added. “That was a good response from our team after last night’s game.”

After losing 12 of 13 games, the Canucks have found their stride, winning five of their last six games.

They have three games remaining before the Christmas break — all at home — as they welcome Tampa Bay (Tuesday), St Louis (Thursday), and Winnipeg (Saturday) to Rogers Arena this week.