When Jim Benning was named the new general manager of the Vancouver Canucks last month, there was one player that was constantly brought up during his opening press conference, and that player was Ryan Kesler.

The gritty second line centre was rumoured to have asked to be traded out of town prior to the trade deadline last year. The new Canucks management will now have to decide whether they want to trade Kesler and build for the future at the expense of the immediate results.

Lets start with the reasons why they may decide to keep Kesler.

When Kesler is on his game, he is a dominant Selke trophy winning 2nd line centre that can dictate the game with his speed and wicked wrist shot. He also makes any team’s power play and penalty kill better. And of course we all remember the 2011 playoff series against the Nashville Predators when Kesler put the team on his back and single-handedly won the series for Vancouver. He may not be able to carry a team through a round anymore, he can still be a player that can help a team win a series when he enters ‘Beastmode’. Whenever I remember ‘Beastmode’ Kesler, one play always comes to my mind:

Although it’s nice to look at the positives of Kesler, given that the Canucks missed the playoffs and must look at every angle of their roster in an effort to improve this franchise, we have to look at the negatives.

One main issue with keeping Ryan Kesler is the way he plays results in quite a bit of wear and tear on his body, causing him to miss quite a few games over the years: 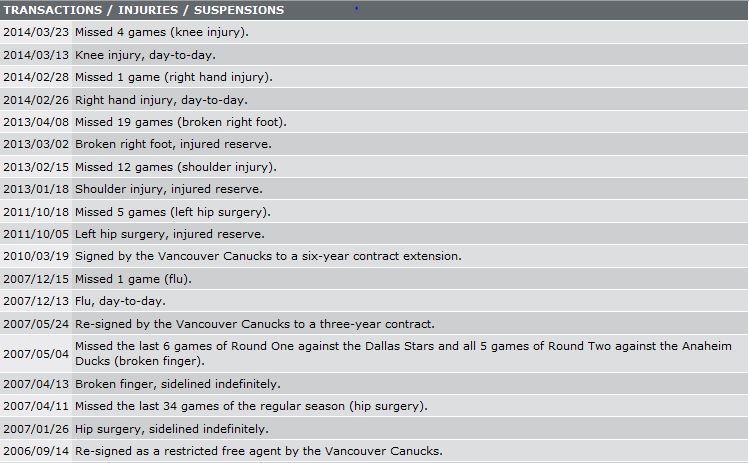 Given his injury history and also because Kesler will turn 30 before next season starts, it is safe to expect that more injuries are in the horizon. Even though Kesler is still an effective second line centre and was able to pot 25 goals last year, he isn’t the same dominant force that we saw during the 2011 regular season and playoffs.

Another constant and fair criticism of Kesler is that he doesn’t use his wingers enough, trying to do everything himself. During the playoffs, opposing teams are able to key-in on Kesler, effectively shutting down his entire line.

The last key point to this is Kesler asked to be traded last season and if the Canucks are able to convince him to stay, how long until he wants to be traded again? Ultimately the Canucks are not a Stanley Cup contender for this upcoming and next season, so they could be running the risk of losing Ryan Kesler for nothing to unrestricted free agency in two years time. Even waiting one more year to trade him could lower his value as teams will be nervous to trade for someone that might leave after just one season.

So what do you do with Ryan Kesler? 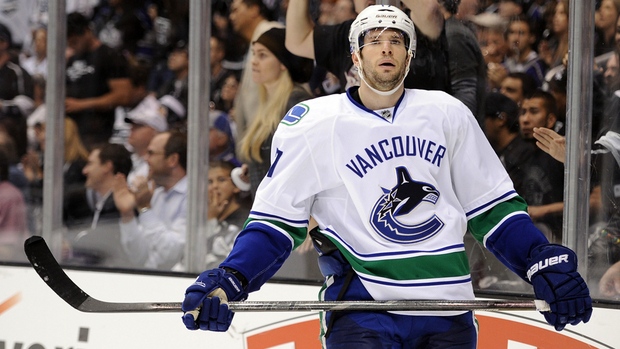 The time is now to trade Ryan Kesler. He is the piece on the Canucks that could garner the best return, with a Stanley Cup contending team looking to push themselves over the top. He also has two years left with a reasonable cap hit ($5 million per season), which will further drive-up the possible return for the Canucks as the team acquiring him will get two full playoff runs from him.

There was significant interest at last year’s trade deadline, namely from from Anaheim and Pittsburgh. Some of the rumoured names to have been offered for Kesler from Anaheim were Emerson Etem, Rickard Rakell, and both of their 1st round picks (10th and 24th overall). Pittsburgh was rumoured to have offered Simon Despres, Brian Dumoulin and Brandon Sutter. The Canucks were rumoured to have asked for names like Devante Smith-Pelley, Sami Vatanen and Derrick Pouliot, who the other team declined to be included.

Kesler has a no trade clause, but according to Jason Botchford, he would waive it to go to Anaheim, Colorado, Detroit, Tampa Bay, Chicago or Pittsburgh.

Coupled with the fact the NHL Draft is usually the time when teams try to make big adjustments and moves, newly appointed GM Jim Benning should be able to create a bidding war between those teams, and possibly others to get the needed package of picks and youth to quickly retool the Canucks.

If the Canucks do trade Kesler, they will obviously have trouble replacing him in the lineup immediately but the package that the Canucks could receive for Kesler would help them quickly retool this franchise so that they can have success for years to come.