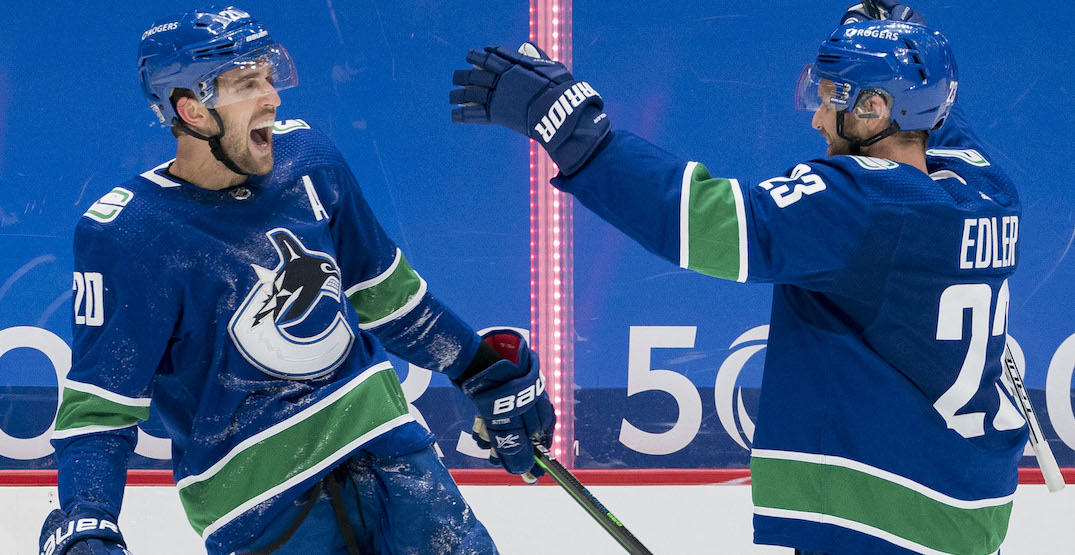 Changes are needed this offseason in Vancouver.

Although many of the team’s inefficient contracts won’t be off the books until the end of 2021-22, there are 16 players listed below who have expiring contracts at the end of this season.

Some of the bigger contracts coming off the books include Brandon Sutter, Alex Edler, and Sven Baertschi. We’ll make predictions on their future… along with 13 other Vancouver Canucks, on the list below.

Since Pettersson and Hughes have the same agent in Pat Brisson, there’s a good chance that they sign matching contracts.

Even though Olli Juolevi got his first taste of NHL action this season, it’s hard to call his 2020-21 campaign a success.

Juolevi has spent more than half the season as a healthy scratch, averaging only 13:11 per contest when he’s actually played.

Regardless, he’s likely to be protected by the Canucks in the expansion draft, and he should return to this team on a short-term contract with a similar average annual value (AAV).

The Canucks 33rd overall pick from 2017 recently made his NHL debut. However his ice time, and eventually his spot in the line-up, dwindled after he was on the ice for three even-strength goals against Edmonton on May 3.

Lind is in a similar situation to Juolevi. Neither player is a bonafide NHLer, but they are both high draft picks who will remain with the organization for at least another season.

A lack of training camp and time to prepare left Hamonic scrambling when the games began in mid-January. However, after returning from injury, he’s looked better alongside Hughes.

I don’t think Hamonic should be a slam dunk candidate to return. His underlying numbers are ugly (43% expected goals for, 40% scoring chances for), and they look even worse in 110 even-strength minutes without Hughes (31% shot-attempts for). He also doesn’t provide any speed on a defence that sorely lacks it.

However, with the Canucks lacking cap space, it’s easy enough to envision the Manitoba native returning for another season or two.

Tyler Graovac has stood out with some physical play and a couple of goals recently. He also sorely lacks the foot speed to keep up with NHL forwards, which likely will keep him from ever cracking the NHL full-time.

However, there are some gaping holes in the Canucks’ bottom-six. If Graovac believes he can snag one of those spots, there’s a good chance he returns on another one-year deal.

The Canucks seem to value Jalen Chatfield, and they do lack right-shot defenders with a defence-first mindset.

Chatfield has had some good moments, although he’s mainly looked like an AHLer just barely treading water at the NHL level. Still, I don’t see many other teams giving Chatfield the opportunity that the Canucks have, so the betting money is that he returns next season.

There’s disappointment, and then there’s whatever Jimmy Vesey has brought to the Canucks.

Once a highly-touted free agent out of college, Vesey now looks like a player who probably ends up in Europe next season. He currently has just one assist in 15 games with the Canucks despite some heavy usage in the top-six.

Claiming both Vesey and Travis Boyd seemed like good bets at the time. Unfortunately, it hasn’t worked out for either player in Vancouver.

Watch Boyd become the next Nic Dowd and become a successful 10-goal per season fourth-line centre somewhere else in the NHL… that’s just part of the Canucks curse right there.

I really do feel for Sven Baertschi.

You can’t tell me that Baertschi wouldn’t have more success in the Canucks top-six right now over a player like Matthew Highmore.

Regardless, this former first-round pick who’s played 32 NHL games since signing a three-year, $10.1 million extension in 2018 is as good as gone.

Brandon Sutter’s tenure in Vancouver has been rocky to say the least, largely because of the lofty expectations placed on him by management, coupled with his overvalued contract.

Despite all that, there is a chance that Sutter returns next season. He’s one of the team’s top penalty killers, and he could realistically still be a capable fourth-line centre in the NHL.

A one-year, $1 million deal might make sense if the Canucks want to go down that road, although they’re best off letting him walk as a free agent. Chasing a younger player with speed, some defensive acumen, and a higher ceiling is a smarter bet than giving Sutter another contract.

The soon-to-be 26-year-old defenceman can’t be happy with how this season has progressed.

He watched two guys that he arguably outplayed in the AHL last season, Juolevi and Chatfield, play a combined 36 games for the Canucks in the NHL.

As an unrestricted free agent, my best guess is that Rafferty seeks out another NHL opportunity outside of Vancouver.

Of all the Canucks mediocre depth forwards in the lineup of late, Jayce Hawryluk has arguably looked the most capable.

That’s not overly high praise, but Hawryluk has the speed and tenacity to at least hold down a roster spot in the NHL.

However, the fact that he hasn’t played on special teams at all leads me to believe that he probably doesn’t return to the Canucks.

Justin Bailey only played three games before a shoulder injury knocked him out for the season. Similarly to Graovac though, you could see Bailey re-signing because he might think there’s an NHL opportunity in Vancouver.

Marc Michaelis reminds me of former five-game Canuck Griffin Molino. He has speed for days… but often that speed is just spent chasing better players who actually have the puck.

However, Michaelis is an RFA and he does have experience playing centre. That’s valuable for an Abbotsford team that lacks depth down the middle. Perhaps some playing time in the AHL can help him rebuild his confidence.

The biggest wild card among all Canucks free agents is their longest-tenured player.

However, Edler’s declining foot-speed, offensive instincts and ability to defend cannot be ignored. At 35 years-old, he’s nowhere near the player he used to be.

And still, you could see the Canucks bringing him back. It’s probably not wise to sign Edler to anything more than a one-year deal in the $1 million range, but the Canucks clearly still love Edler.

Because of that, I’d pencil the odds of him returning at just above 50%, perhaps on a one-year, $2 million deal.