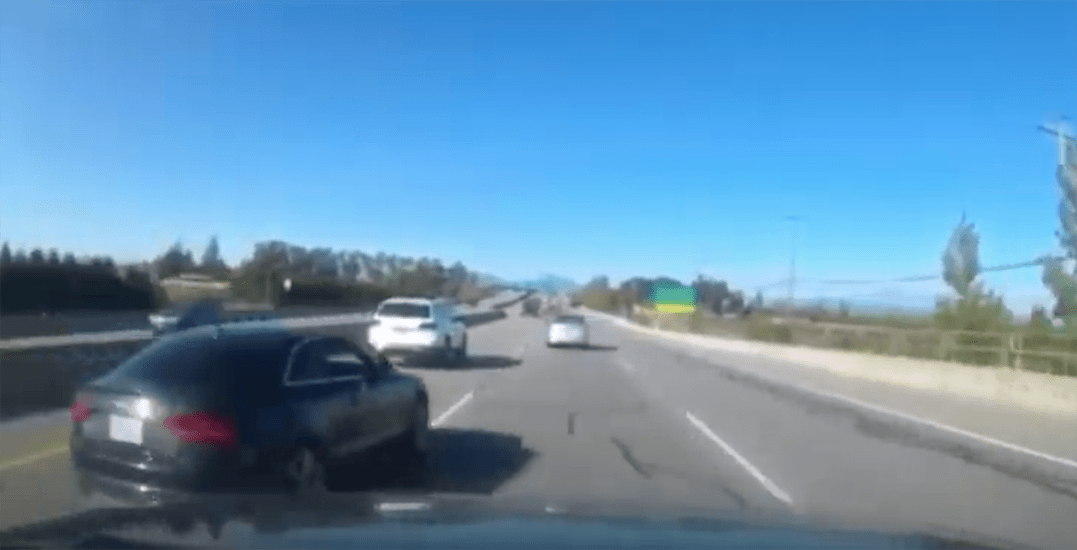 The Delta Police Department (DPD) is speaking out after a close encounter between a police officer, a driver who had been pulled over, and a speeding vehicle on Highway 17.

According to a statement from police, the incident took place on September 30. The officer and the driver were pulled over on a turning lane.

Dashcam footage, that was captured by a witness and shared with the DPD, shows a black vehicle “weaving in and out of traffic, speeding excessively, and putting others at risk with their unsafe driving habits.”

The DPD says that while the officer never got a look at the driver, he “felt the wind at his back as the driver narrowly avoided colliding with both his vehicle and him.”

The police statement also notes that while the dashcam footage doesn’t fully capture it, the unmarked police vehicle has its lights flashing during the traffic stop.

“Our officers were able to isolate the license plate of the car in question from the video,” says A/Inspector Ryan Hall, who oversees DPD’s Traffic Unit. “The officer who was nearly struck decided to pay [the driver] a visit in person.”

The owner of the vehicle, a Delta resident, was given a $368 ticket for driving without due care and attention.

“This type of driving behaviour is so reckless,” says Hall. “This is exactly how fatal collisions happen.”

“Less than a second of difference and we could have had a significantly different outcome. It was a beautiful sunny afternoon. It takes just one person, with selfish or unthinking driving behaviour, to cause unbelievable carnage and pain.”

The DPD’s dashcam footage can be seen below: