We’ve complied a list, which we will keep adding to, of upcoming food-related events happening in the city this October.

With West Coast oysters back in season, Parallel 49 Brewing Company is partnering with Merchant’s Oyster Bar and Sawmill Bay Shellfish for a month-long Oyster Fest. Drop by the Commercial Drive digs for $1 oysters and $3 12 ounce craft lager. To commemorate the end of Oyster Fest, Parallel 49 Brewing Company will be release a limited edition Oyster Stout, which will recreate oyster flavouring without containing any oysters.

When: Running from September 22 to October 22
Where: Merchants Oyster Bar, 1590 Commercial Drive
Price: Admission is free with food is priced as advertised. 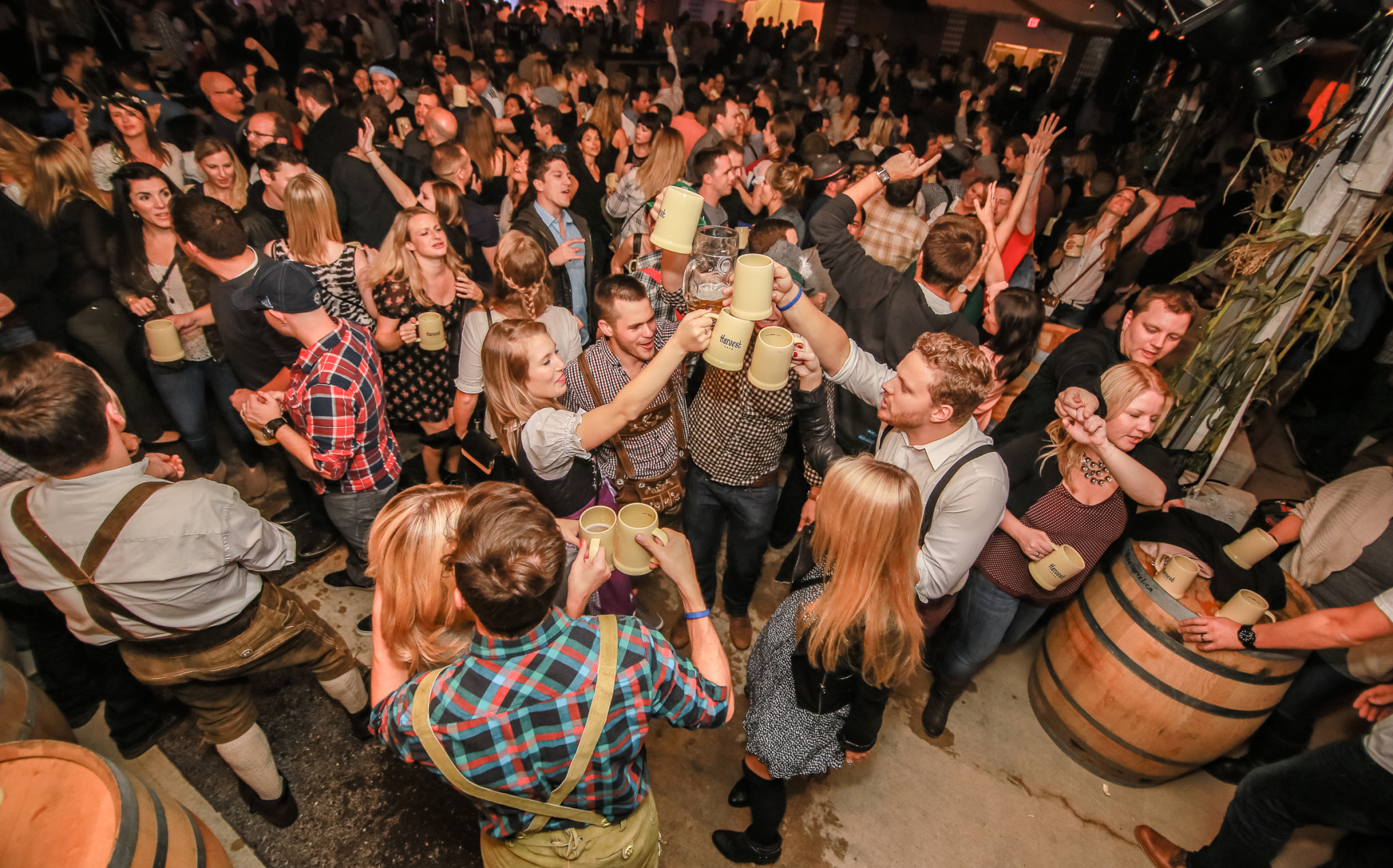 Photo courtesy of the Harvest Haus

Save the date, The Harvest Haus Oktoberfest Festival returns this October to bring a “mini Münich” to the Queen Elizabeth Plaza in downtown Vancouver. Each four-hour seating promises an authentic German experience for 1,200 people complete with Medieval minstrelsy, Bavarian brass oompah bands, live DJ’s and even a sawdust sprinkled dance floor.

When: October 1 to 11, various times
Where: Queen Elizabeth Theatre, 649 Cambie Street
Price: Tickets range in price from $25 to $275 and go on sale September 1, purchase here.

Oktoberfest at the Deutsches Haus

For even more Oktoberfest festivities, grab your lederhosen (or dirndl) and head on over to the Deutsches Haus at the Vancouver Alpen Club. Enjoy live music, copious amounts of beer, and delicious German food.

From Farms to Forks

From Farms to Forks is back for its sixth year, bringing with it some of the city’s most prominent chefs, mixologists, and the region’s best growers and producers for a fun night of B.C. wine and beer pairings, cocktails, and tasting stations. Attendees to the event, which will be held at the Pacific Institute of Culinary Arts, will be able to wander from kitchen to kitchen and watch the chefs in action. Participating restaurants include The Acorn, Tableau Bar Bistro, Burdock & Co., Miku Restaurant, Cinara, and more. 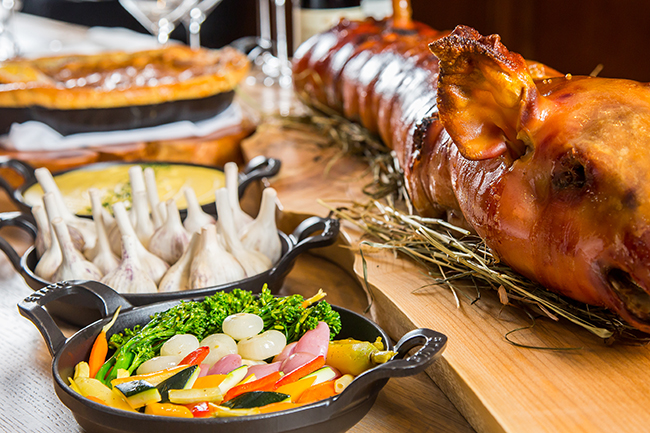 Building on the success of its sold-out string of summer Seafood Boils, Boulevard Kitchen & Oyster Bar adds a Sunday Pig Roast Series to the menu in its luxurious private dining room this fall. Tickets for Boulevard’s Sunday Pig Roast Series, which will be held throughout the month of October (and November), are limited to just 42 tickets per event.

Save on Meats’ pop-up Greasy Spoon Diner Supper Series continues in October, challenging yet another notable Vancouver chef to take over the kitchen and serve a dining room full of guests. Next in line to step into the Save on Meats kitchen is Chef Gus Stiffenhofer-Brandson from Perch Restaurant. This event will benefit A Better Life Foundation.

When: Monday, October 12. Early seating is at 5:30 p.m., followed by later seating at 8 p.m.
Where: Save On Meats, 43 West Hastings Street
Price: Admission for The Greasy Spoon Diner’s four course menu is once again by donation (suggested donation is $95 per person) with all proceeds going to charity and can be purchased online here.

Campagnolo Roma is set to host a memorable Quinto Quarto dinner featuring whole animal cooking, as well as British Columbia’s excellent autumn bounty on Wednesday, October 14. Quinto Quarto is held at Campagnolo’s East Hastings location only a couple of times per year in honour of the important Roman culinary tradition of nose-to-tail cooking. This particular dinner will celebrate fall’s harvest, combining unique cuts of meat known as the fifth quarter (quinto quarto) with seasonal produce sourced directly from the farm, and paired with beer from Powell St. and Strange Fellows breweries.

When: Wednesday, October 14
Where: Campagnolo Roma, 2297 East Hastings Street
Price: Tickets are priced at $78 and can be purchased online here.

The Taste of Yaletown, returns to Vancouver this October. Now in its 11th year, this community food event will run from October 15 to 29, and boast exclusive fixed-price menus on offer at over two dozen restaurants in one of Vancouver’s trendiest neighbourhoods.

When: Friday, October 16, from 6 p.m.
Where: Vancouver Aquarium, 845 Avison Way
Price: Individual tickets are priced at $125 and can be purchased online here.

If you’re looking to expand your cooking repertoire make sure you register for the Eclairs & Choux Pastry Cooking Class. Led by the talented Valentine Kitamura, owner of Tartine & Maple and baker at The Uncommon Café, the class will entail creating a variety of sweet and savoury “choux pastry” (dessert puffs) in a fun and casual setting.

When: Sunday, October 18, From 4 p.m. to 8 p.m.
Where: Exhibition Hall, Roundhouse Community Centre, 181 Roundhouse Mews
Price: Tickets are priced at $85 and can be purchased online here.

Tastes of the States dinner at Mamie Taylor’s

Mamie Taylor’s second Taste of the States regional longtable dinners will take place on Wednesday, October 21, introducing 30 guests to the traditional flavours of a chosen American culinary region with a native welcome cocktail and a four-course menu. Diners who attend the second sit-down meal will be rewarded with a feast prepared by chef Tobias Grignon, which has been inspired by the cuisine of Charleston, South Carolina.

When: Wednesday, October 21, 6:30 p.m.
Where: Mamie Taylor’s, 251 East Georgia Street
Price: Tickets are priced at $45 per person. Reservations are a must and can be made online at www.mamietaylors.ca.

Whisky enthusiasts get ready to mark your calendar, as Edible Canada partners up with whisky expert Andrew Starritt of Cask Strength. This one-of-kind evening will feature unique and rare single malt whiskies, which will be matched with rich, sultry dishes crafted to enhance the flavours of the spirits. With price points ranging from $80 to $400 a bottle, these dinners provide outstanding value and are perfect for the whisky lover and learner.

This year’s Vancouver Home & Design Show is gathering quite the collection of the city’s foodie elite including chefs, sommeliers, health food experts for the Masters Series on the event’s cooking stage. Presenters will demonstrate a variety of eats, sweets and tried and true kitchen cheats via live seminars and workshops designed to directly impart their expertise on the audience.

Join the YEW team to celebrate RIDGE, a California Wine Legend on October 29. The intimate evening promises to deliver an unforgettable food and wine experience. Following a reception, guests will sit down to a five-course meal carefully crafted by Executive Chef Ned Bell, and his team, showcasing eight distinctive RIDGE wines from iconic vineyards. Hosted by YEW Sommelier Steven Lane and RIDGE Vineyards’ own Christina Donley, this decadent event will have guests celebrating the return of fall flavors and rich reds. 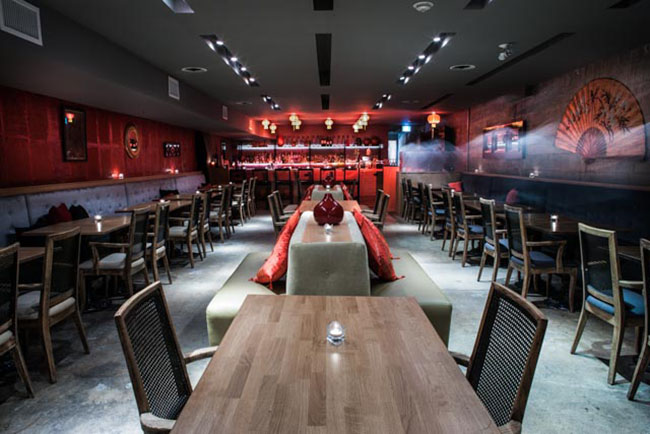 Costume-clad revelers are invited to join Sai Woo in the downstairs bar for their haunted Halloween party. Miss DJ will be spinning throughout the night to set the mood, while a Ouija board offers attendees the chance to speak with the spirits of the afterlife. Dangerously addictive drinks and bites will be on offer too. Don’t forget to dress up, the most devilishly dressed guest will be selected to win a dinner for two at Sai Woo, plus a private Ouija board session in the lounge.

When: Friday, October 30, and Saturday, October 31, from 7 p.m. to Midnight
Where: Sai Woo, 158 East Pender Street
Price: No admission fee. Open to the pubic on a first come, first serve basis.