Proponents of an upcoming major tower development at the intersection of West Georgia and West Pender streets in downtown Vancouver are hoping to take the project to new heights.

A 515-foot-tall (157-metre-tall) mixed-use building is being considered for a triangular-shaped site on the east side of the prominent intersection by the flagpoles. There will be 250,000 square feet of residential floor area within the relatively slender 44-storey structure.

The unnamed project is being spearheaded by Hong Kong-based Brilliant Circle Group and designed by James Cheng, the local architect behind some of Vancouver’s largest skyscrapers such as the Fairmont Pacific Rim, Shangri-La Hotel Vancouver, and Shaw Tower. 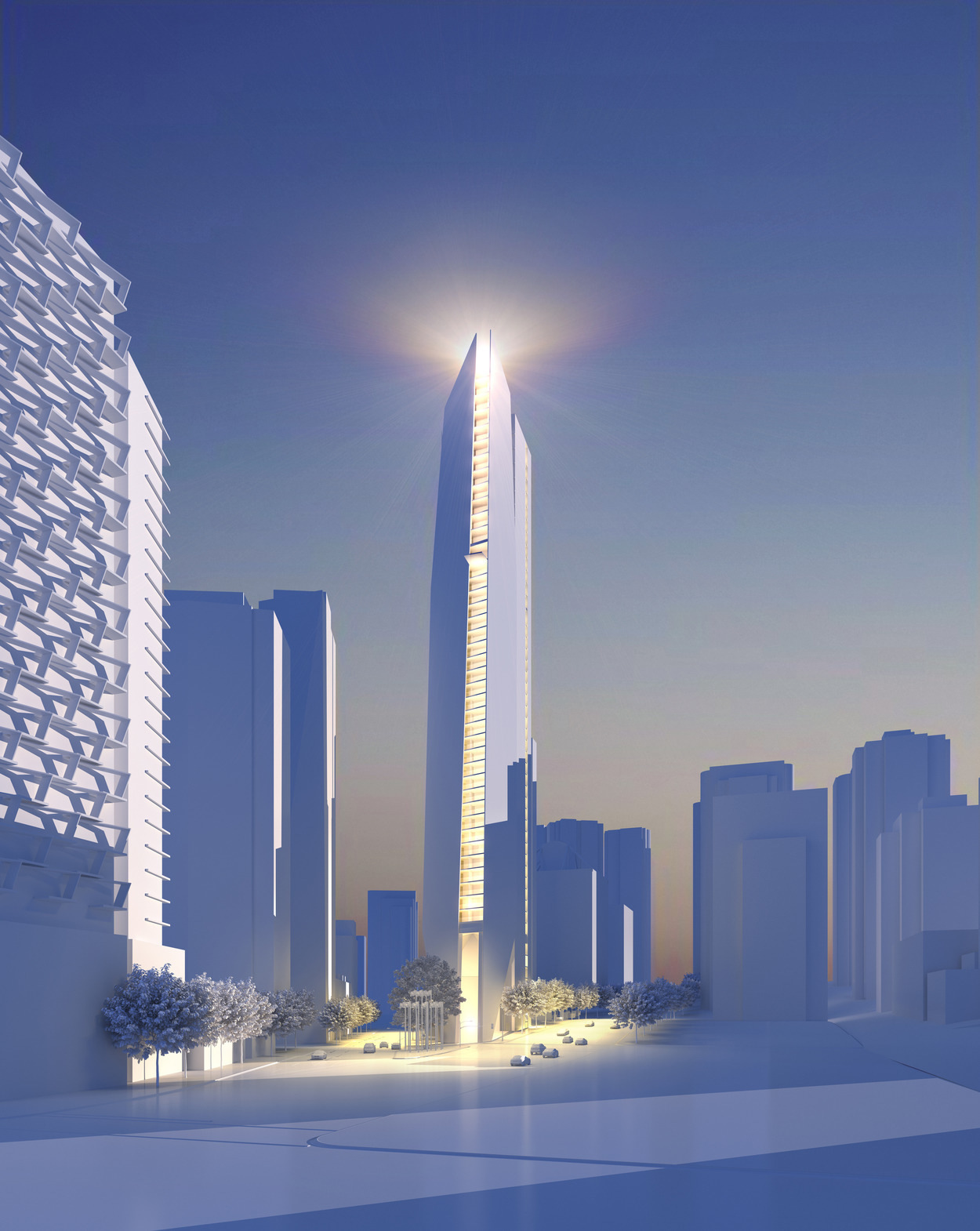 Cheng told Vancity Buzz his obelisk-inspired monument design mediates between two other complex proposals in the immediate area along the West Georgia Street corridor on the northern fringes of the West End, where it borders with Coal Harbour.

“The intersection will be quite busy, with three buildings competing for everyone’s attention,” he said. “So we would like to do a very simple and elegant building… but it will also stand its own ground.”

While most buildings come right down to the ground, this proposal will completely avoid it to create a vast urban space. The building will be lifted approximately 80 feet (24 metres) into the air to establish an urban room right at the bottom of the building.

“We feel this is very important because that is a very busy intersection – it’s quite crowded,” explained Cheng. “So by opening up when people walk by, they can actually walk under the building and there will be a special public art feature in the centre of it.”

“We’re very short on urban plazas in Vancouver, so we thought given the prominent location and what surrounds it, to hollow out the bottom of the building and give it back to the public realm would help maintain that type of civic progression of Georgia Street.”

Rendering of the proposed urban room at the bottom of 1455 West Georgia. 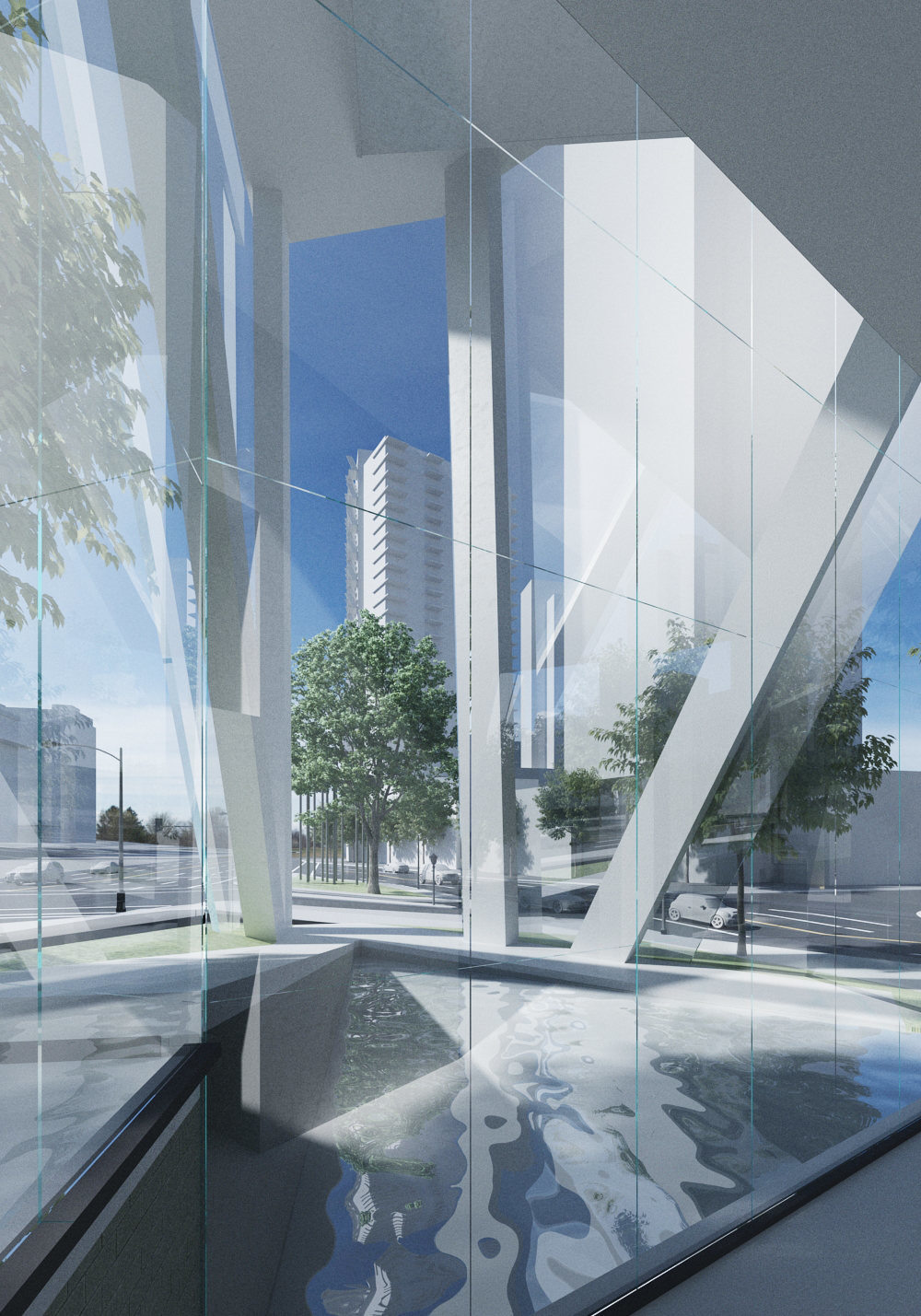 Current zoning for the site only permits buildings with a height of up to 450 feet (137 metres). Earlier this week, Vancouver City Council approved a City staff recommendation to consider that the site be included in the General Policy for Higher Buildings, which allows certain sites within the Central Business District (CBD) or along a downtown Vancouver arterial route to take on a greater height to create gateways into the city or a new landmark.

Proposals that seek to be under the umbrella of the Higher Buildings policy are required to achieve a new benchmark of architectural excellence. Such developments under the policy are also meant to foster economic and job growth.

“The development site is unique and prominent and, from an urban design perspective, is worthy of consideration as a landmark building in the downtown,” reads a report submitted to Council. “After examination of the proposal, staff have concluded that this site is appropriate for a taller landmark building than could be achieved under the current zoning.”

A major 524-foot-tall (160-metre-tall), 658,687-square-foot office tower development within the CBD at 1133 Melville Street is also being considered under the policy.

The towers designed by Kuma and Scheeren can reach heights of up to 500 feet as stipulated in the 2013-approved West End Community Plan.

There is also another proposal by Bosa Properties across the street from Cheng’s proposal, at the corner of West Georgia and Cardero streets. Although it will boast an uniquely scaly facade, it will only have a modest height of 265 feet. 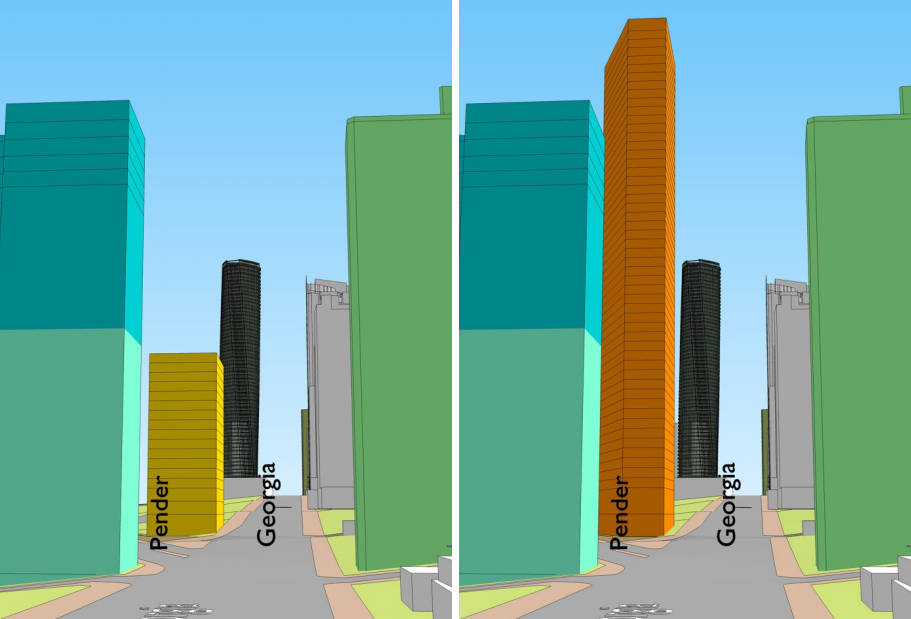 Looking east: A view of the existing buildings at the development site from the intersection of West Georgia and West Pender streets. 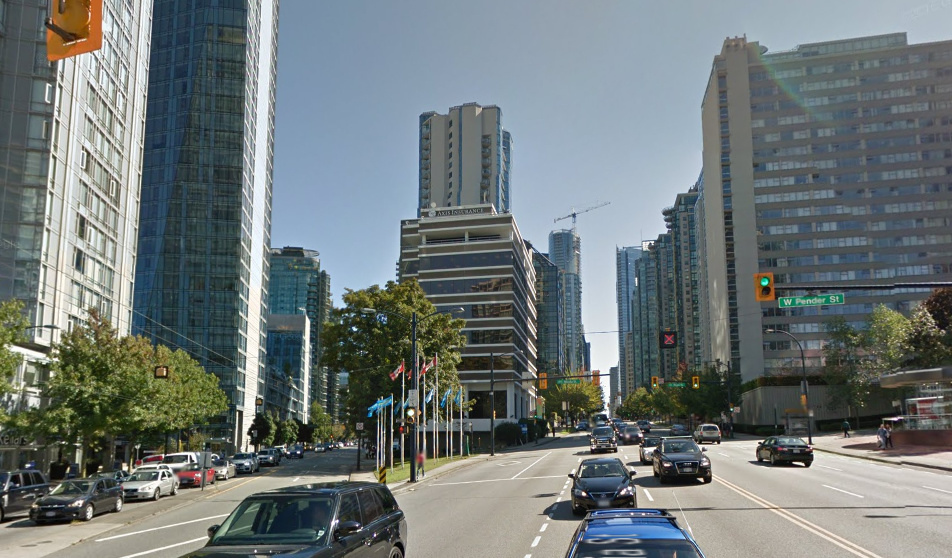 Location of the proposal. 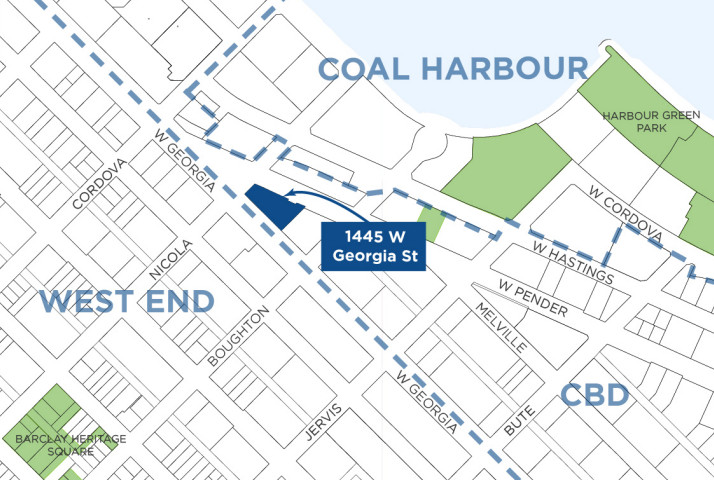