With the movie Straight Outta Compton making waves in the movie industry, you might be surprised to learn that N.W.A. has a Vancouver connection – and now you can own a major piece of their history.

Priority Records owner Bryan Turner launched N.W.A. to fame, and his nephew, Daniel Cutler, is launching a pop-up shop to auction off some rare hip-hop memorabilia.

Turner was born and raised in Winnipeg and attended UBC before moving down to L.A. to launch Priority Records in 1982. He signed N.W.A. and propelled them to fame and released songs from artists like Ice Cube, Easy-E, Dr. Dre, Snoop Dogg, Mack 10 and had a distribution deal with Master P’s hugely successful No Limit Records.

Cutler’s parents collected every gold and platinum award at their home in Vancouver while Turner’s career skyrocketed. Upon their passing, Cutler collected all the awards, and with Turner’s blessing is putting them up for a silent auction.

The platinum and gold records are from N.W.A, Eazy-E, Ice Cube, Dr.Dre and other Priority Records artists – nearly all of them are up for grabs. Half of the proceeds from the sales will go to the YMCA. 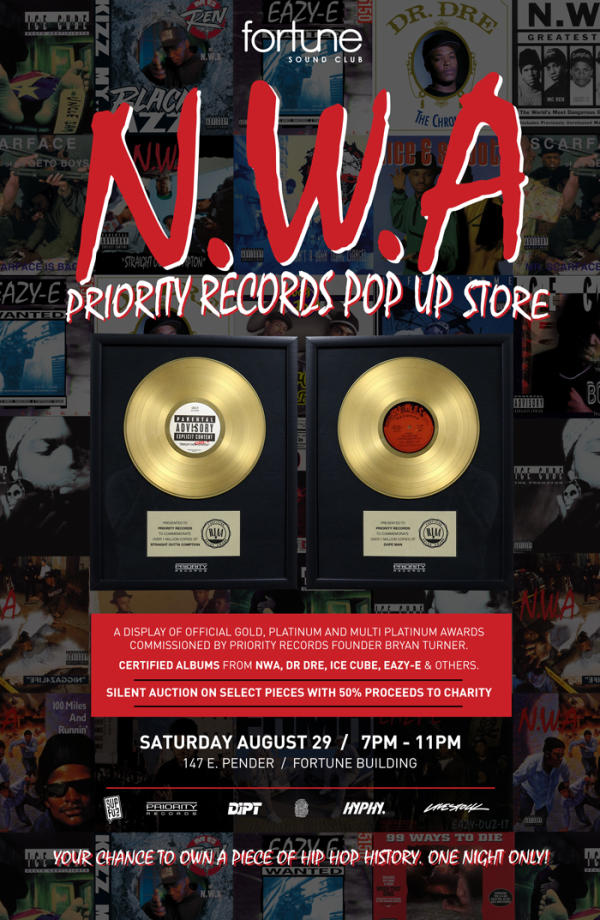