Nothing But Sky was a disappointment, plain and simple. The ingredients were there for a modern, adult treatment of comic books, but a sloppy script and poor acting prevented this production from taking off.

I wanted so badly to root for The Only Animal‘s Nothing But Sky. Comic books don’t often get their due in theatre, and I can’t think of a more iconic story than the Man of Steel. The arrangement was an animator’s dream, mixing appealing background visuals and ‘props’ with live actors to tell the story of Superman’s creators.

But when you take a bunch of moving parts and throw them together on the stage, you need to make sure the production gels together to form a unified whole. Nothing But Sky, for all of its ambitious ideas, doesn’t accomplish this basic principle. 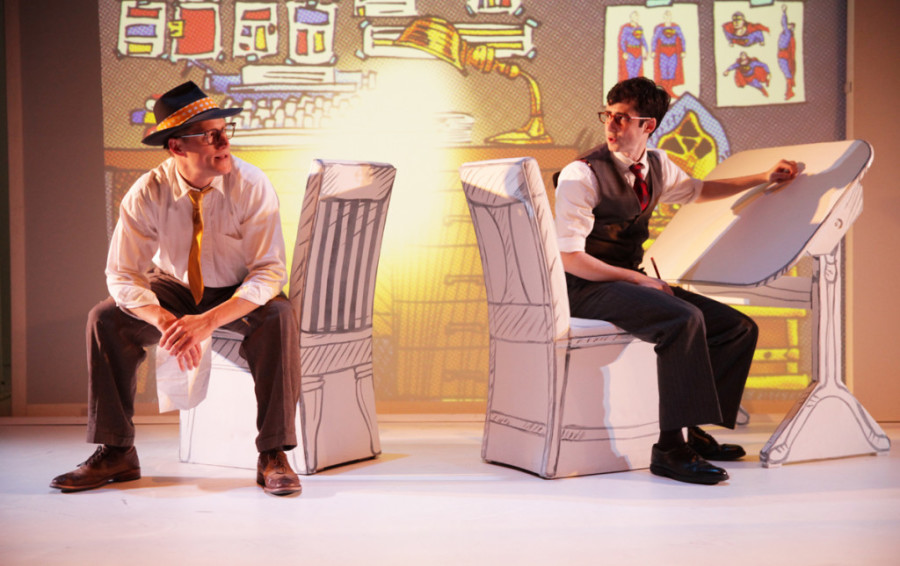 Meet Joe; his best friend, Jerry, the Superman writer; and Joanne, the original model for Lois Lane and the girl they both love. Ride the skyrocket as their creation goes from slushpile to the most popular Superhero of all time. The play becomes a living comic book, where real and drawn characters merge as we discover that our closest friends are equal parts Villain and Hero. But the real danger comes when DC Comics gets a hold of Superman, and your creation might return to destroy you.

As much as the 3D projection mapping and animated action panels kept my eyes entertained, the obvious talents of the animation team couldn’t cover up the errors on stage. Before visuals, before interesting use of stage and props, there needs to be a story. The script languishes instead of moving along, gets in the way of the excitement and trips any buildup.

There are only little pockets of inspiration, clever things that the play does in weaving between animation and characters. Amitai Marmorstein channeled his best Christopher Mintz-Plasse impression, which starts the play off on a high note. By the end of it, however, he had degenerated into the mopey Harry Potter kid from the latter books. I couldn’t find the Joe in him, couldn’t see the nerdy awkwardness behind his nervous flirting with Joanne, couldn’t feel the hopeless desperation towards his failing eyesight.

It’s a disservice that during his most climatic soliloquy, the set has been completely blacked out by the scribblings of his pen. You can’t see Marmorstein’s expressions, only hear him railing against his life, and that wasn’t enough to connect. This seemed to be Nothing But Sky’s unintentional theme for the night: the overuse of technology and style over substance.

All three actors had little missteps in their lines. Split-second fumbling and hesitation that took away from the tone they were trying to achieve on stage. I don’t know how Only Animal’s Artistic Director, Kendra Fanconi, who both wrote and directed the play, could have let that slide during rehearsal. It seemed very much to be a labour of love,  with so much obvious effort packed in. You only have to open up the program (a hand-drawn comic book) to understand her attention to the little details.

Did the unfamiliar technical difficulties get the better of this production? The characters seemed lost on stage, too small for the animated backdrops.

Nothing But Sky premiered in Vancouver during a ‘snow storm.’ Well, it wasn’t really one, but I’m sure this affected attendance numbers. The weather was a blessing in disguise: the play needs time and consideration in order to shave down into a manageable, unified whole.

Nothing But Sky played at the Scotiabank Dance Centre from February 21 to March 2. No shows remaining.