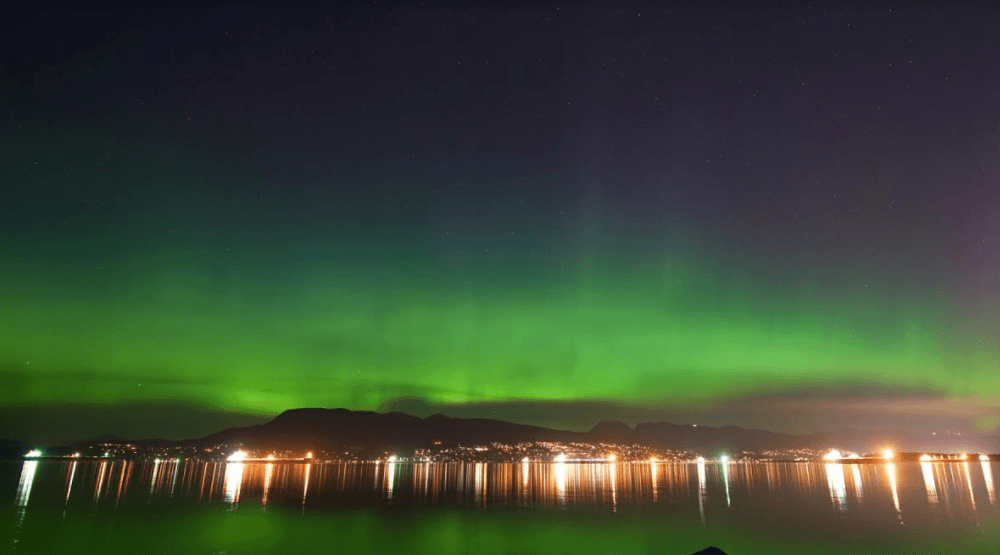 The Northern Lights over the North Shore mountains in Vancouver. (Photo courtesy of Martin P)

The night skies over Canada’s southernmost cities will likely be lit up by the Northern Lights late this weekend following an unusually large explosion of plasma from the sun.

According to the US National Oceanic and Atmospheric Administration (NOAA), the coronal mass ejection this morning could produce a far-reaching aurora borealis as south as Washington State and New England.

An aurora borealis is produced when the charged particles interact with Earth’s magnetic field.

As a result of the powerful solar flare, NOAA has issued a geomagnetic storm watch for a Kp 6 event and says the lights are expected to appear sometime between Sunday night and the early morning hours of Monday.

Map showing the reach of the Northern Lights based on the Kp prediction scale. (NOAA / SEC Boulder CO, USA)

This means major Canadian metropolitan areas like Toronto, Montreal, Vancouver, and especially Calgary could see a major natural nighttime light show, although this is dependent on local weather.

The expected time of the Northern Lights varies between latitudes, but it generally happens anytime between 10 pm and 4 am local time.

As always, areas away from light pollution are best for spotting the spectacle.