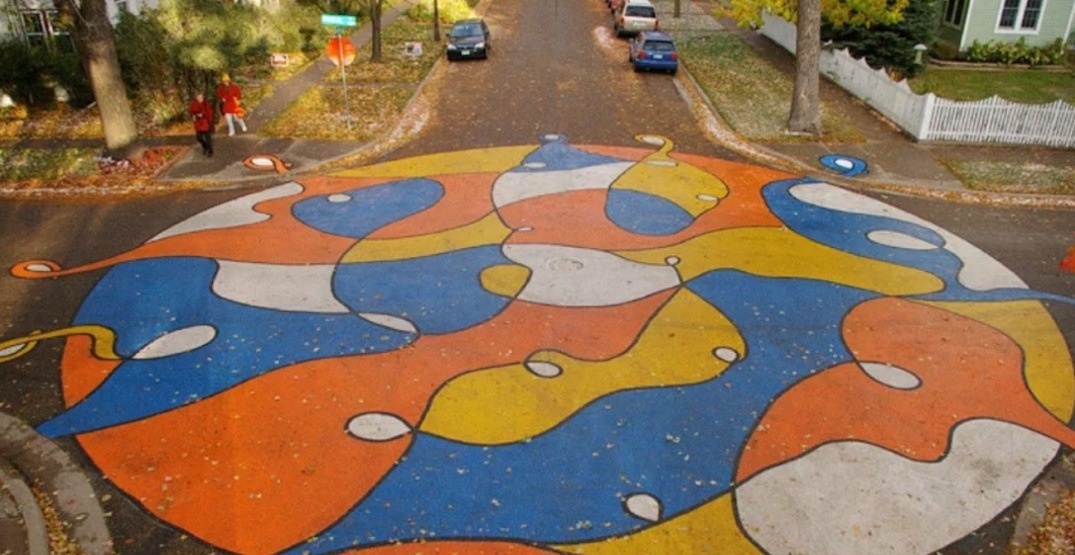 Example of a street mural in St. Paul, Minnesota. (supplied)

A cul-de-sac immediately in front of the entrance into Braemar Elementary School in the District of North Vancouver is slated to receive a public art mural treatment this weekend.

The installation will be located at the northern end of Mahon Avenue, where parents drop-off and pick-up their children, and it is proceeding as a pilot project for the possibility of creating a street mural policy for the district.

According to a district report, street murals can be utilized to create positive community building and raise awareness of issues for pedestrian on local residential streets. It also cites a study that found 85% of people living near a street mural “perceived increases in neighbourhood community and safety and a decrease in crime and traffic speeds.”

The report points to Portland, where on-street murals have been permitted for 20 years and a policy has been created to allow citizens and neighbourhood groups to apply to paint a street mural.

Local businesses are funding this installation, which is expected to require maintenance every two years.

A community event — with a BBQ lunch, music, and games — at the cul-de-sac is scheduled to coincide with the mural painting, from 10 am to 3 pm on Sunday, September 8.

Large-scale, on-street murals are rare in the region, but one prominent installation earlier this decade was a grassroots-spearheaded fried egg mural at the intersection of Trafalgar Street and West 5th Avenue in Vancouver’s Kitsilano neighbourhood. The fried egg lasted for a few years, before it was removed due to its deterioration.

A giant fried egg mural painted at the intersection of West 5th Avenue and Trafalgar Street in Vancouver’s Kitsilano neighbourhood. Captured in May 2016. (Google Maps)