Every year John Ribalkin and his wife Aurore Viau in North Vancouver gets into the festive spirit of the holidays by adorning their home with more than 100,000 Christmas lights.

The lights delight passersby every year and it’s all in the name of a good cause.

We caught up with their son Ethan Ribalkin to get the inside scoop on the lights, why they do it, just how many lights there are, and other fun facts. 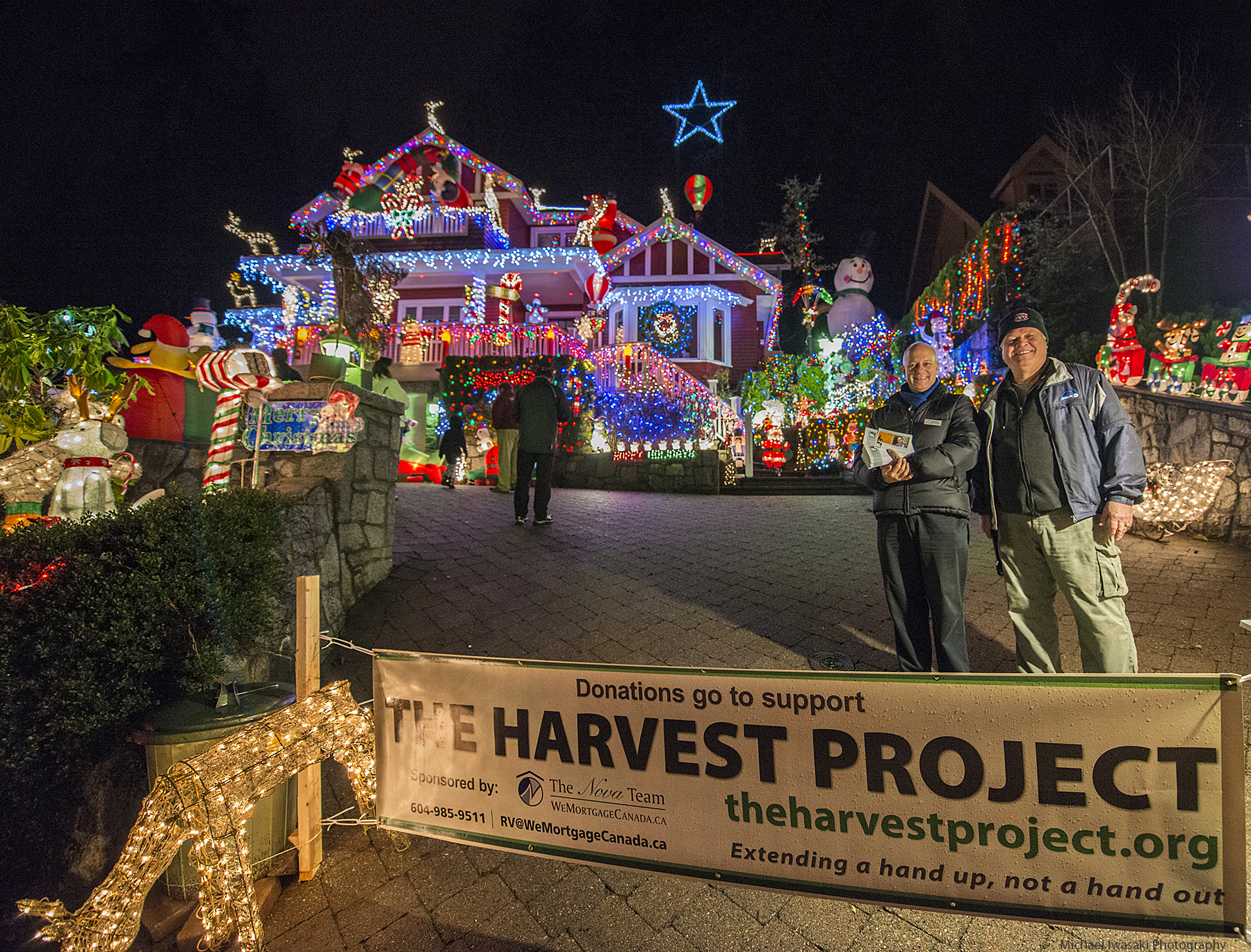 How long does it takes for you to put the lights up – do you have any professional help or do you do it all yourself?

My parents, John Ribalkin and Aurore Viau, start unpacking the different displays in September and begin putting them back together. They then test all the lights, each deer, every motor, all the Santas and elves, and repair those that did not survive storage over the winter.

Come mid-October, myself, my sisters, and brother-in-laws basically move back home every weekend to begin assisting and start to put things outside. This includes renting a massive boom to get things up on the roof, testing power and doing our best to arrange the display in a way without overloading one breaker. It can be very frustrating at times and more work than I think people realize.

It’s all worth it in the end when we see families, especially children, running up and down the driveway excited to see “Santa’s House” as many of them have come to call it.

My parents also have five grandchildren, so they also keep us very motivated. I am a very blessed uncle to have five nieces and nephews that I cherish, and one of my favourite things to do is hold one of their hands and walk them up around the display.

We are also touched by drive-by visits from retirement homes, including one I teach ukulele at as part of Music Therapy and Children’s Hospital. My father, John, has estimated that he is personally about 350 hours in for this year’s display, same as my mom. It’s unbelievable how much work they put into doing this and they deserve a ton of credit. For myself, I am six weekends.

To get the star 86 feet in the air, we hired an arborist a few years ago. No nails are used and it is set up on a pulley system. The star is seven metres across in size, and we’ve been told it can be seen from Coal Harbour and from some bridges. It takes the coordination of a minimum of five people to set that bad boy up – four of us to pull it up, as it is very heavy, then two people on the street to let us know if it is level.

Our lights are put up by 95% family only. We have had the occasional friend volunteer their time for a couple hours here and there. This year, we hired a professional electrician to get us 40 amps of more power. Their service was spectacular from Vancity Electric and their own, Cory Byron. 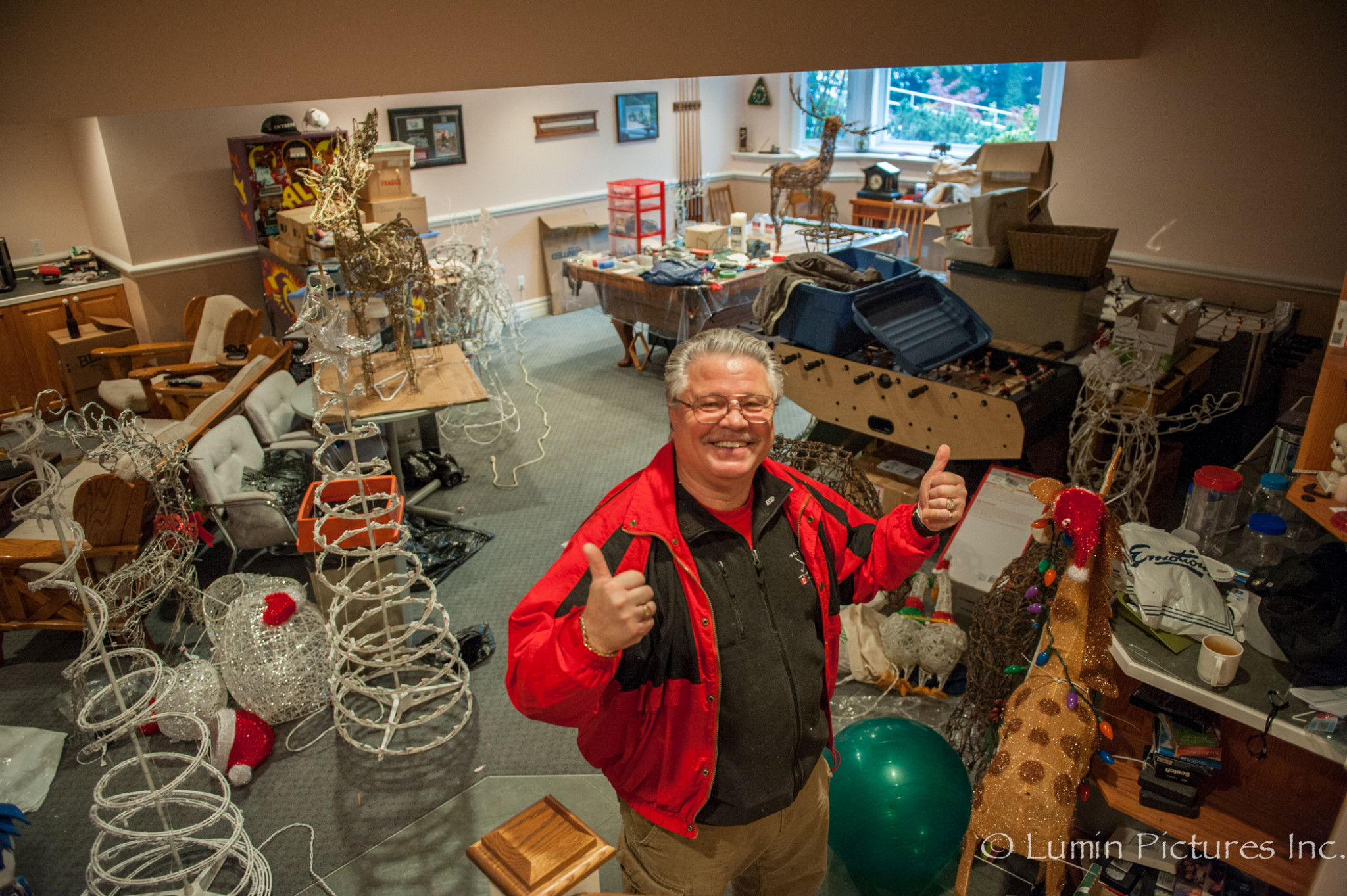 Do you keep adding more lights each year?

It’s common knowledge that my old man lost his mind a few years ago. He used to “secretly” – but not so secretly – go Boxing Day shopping each year to buy more stuff. Every single year we add more and more, but the more we had, the more work and the harder it is to manage the power needs of the display. Your readers should know that my folks have talked about this being one of the last years. 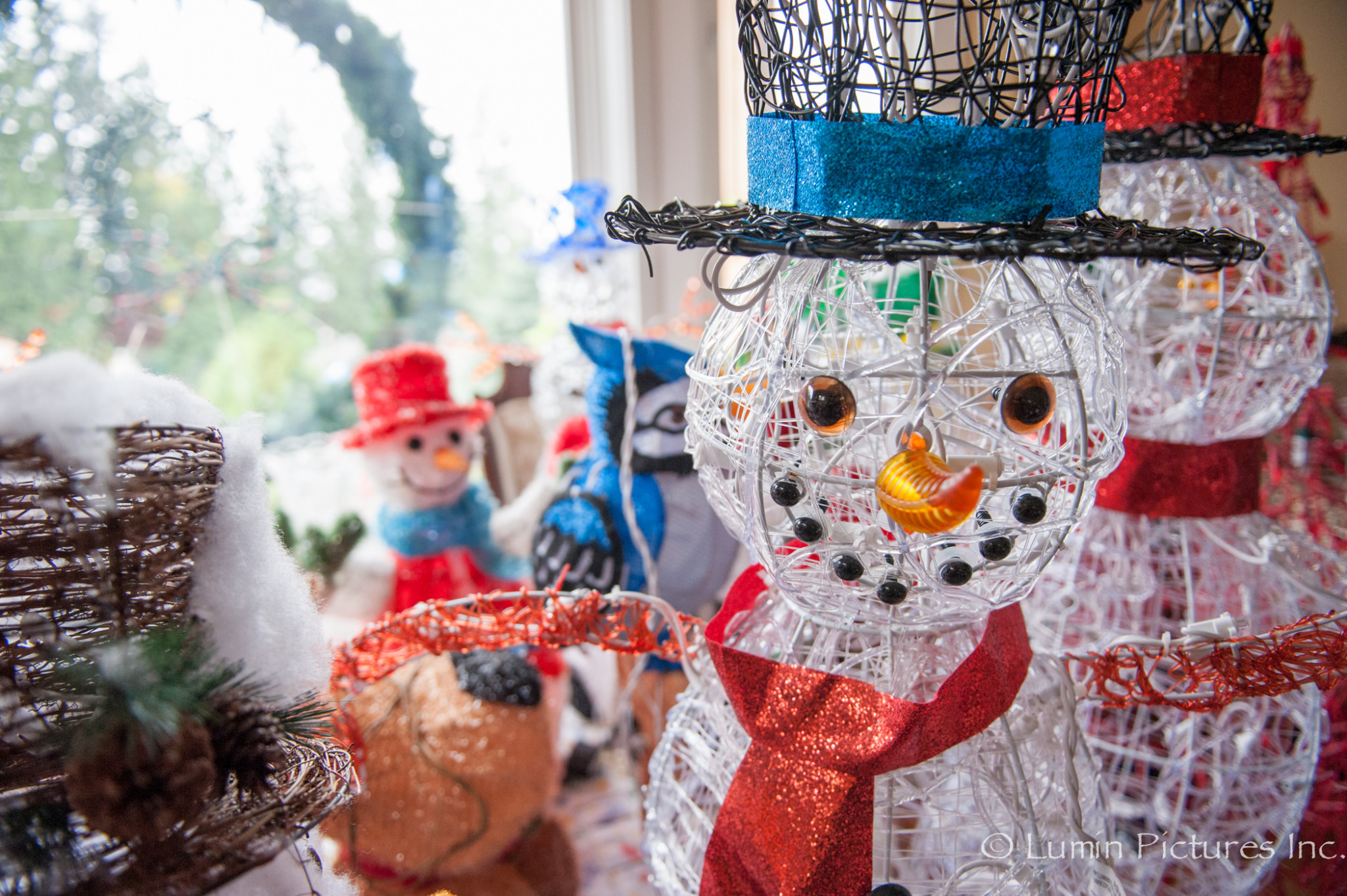 How much has it cost you over the years to purchase all these decorations?

My parents are not too certain how much all the decorations have cost over the years, but mom’s response was – “Oh my God,” followed by laughter, before adding, “I have no idea.”

“This year alone, we have added $5,000 worth of expenses,” John said. “We don’t really keep a running total, but would estimate a few grand each year to keep it running.” 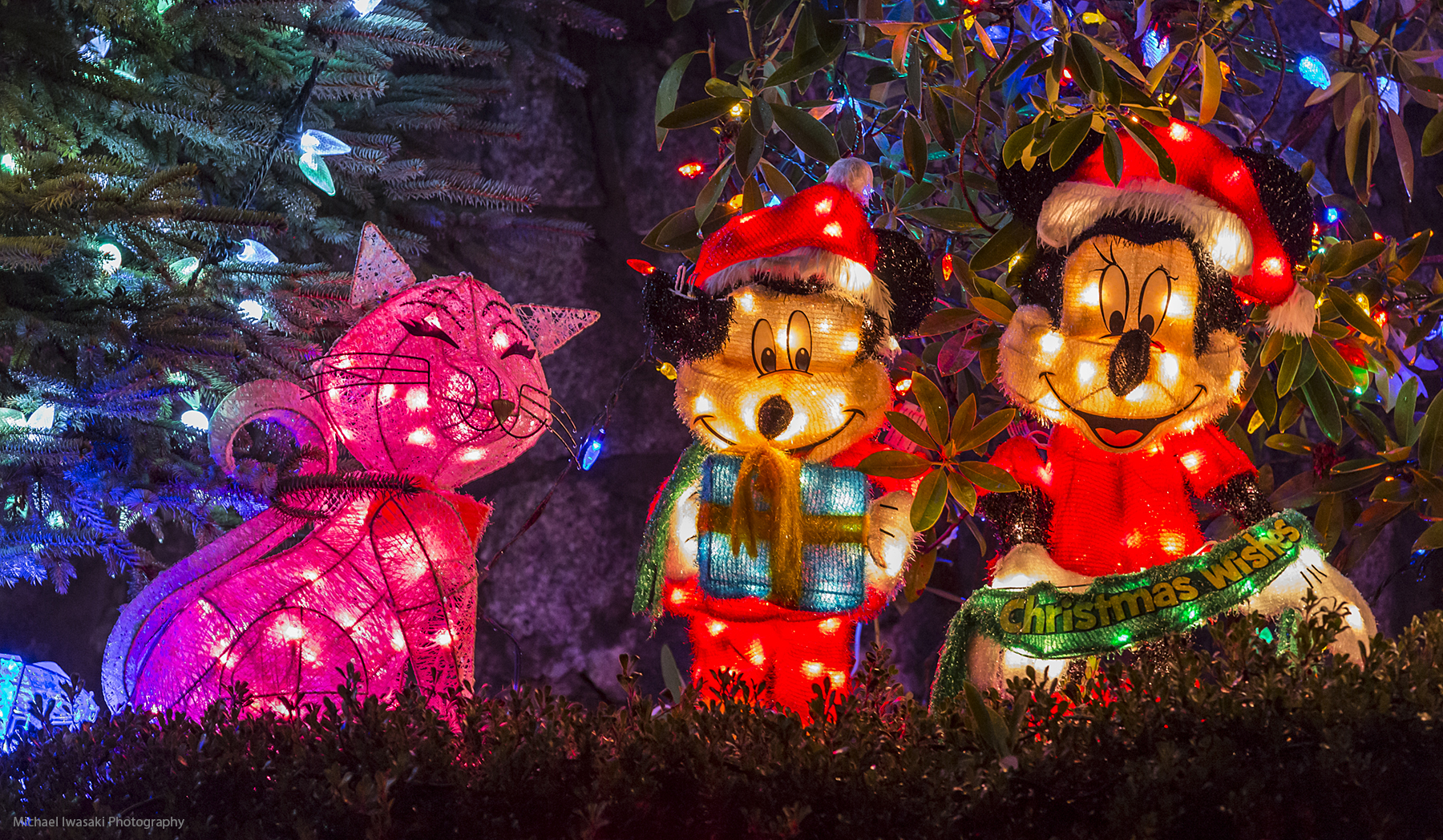 How much does your electricity bill go up during December?

My folks are on equal billing with BC Hydro. This means, whatever their annual electrical bill total was for 2014, their 2015 will be that total cost divided by 12 months as an estimate. In other words, they pay the same each month so they do not know exactly how much this one month costs. We have contacted BC Hydro to see if they would sponsor us since it is for charity, but they have not responded. 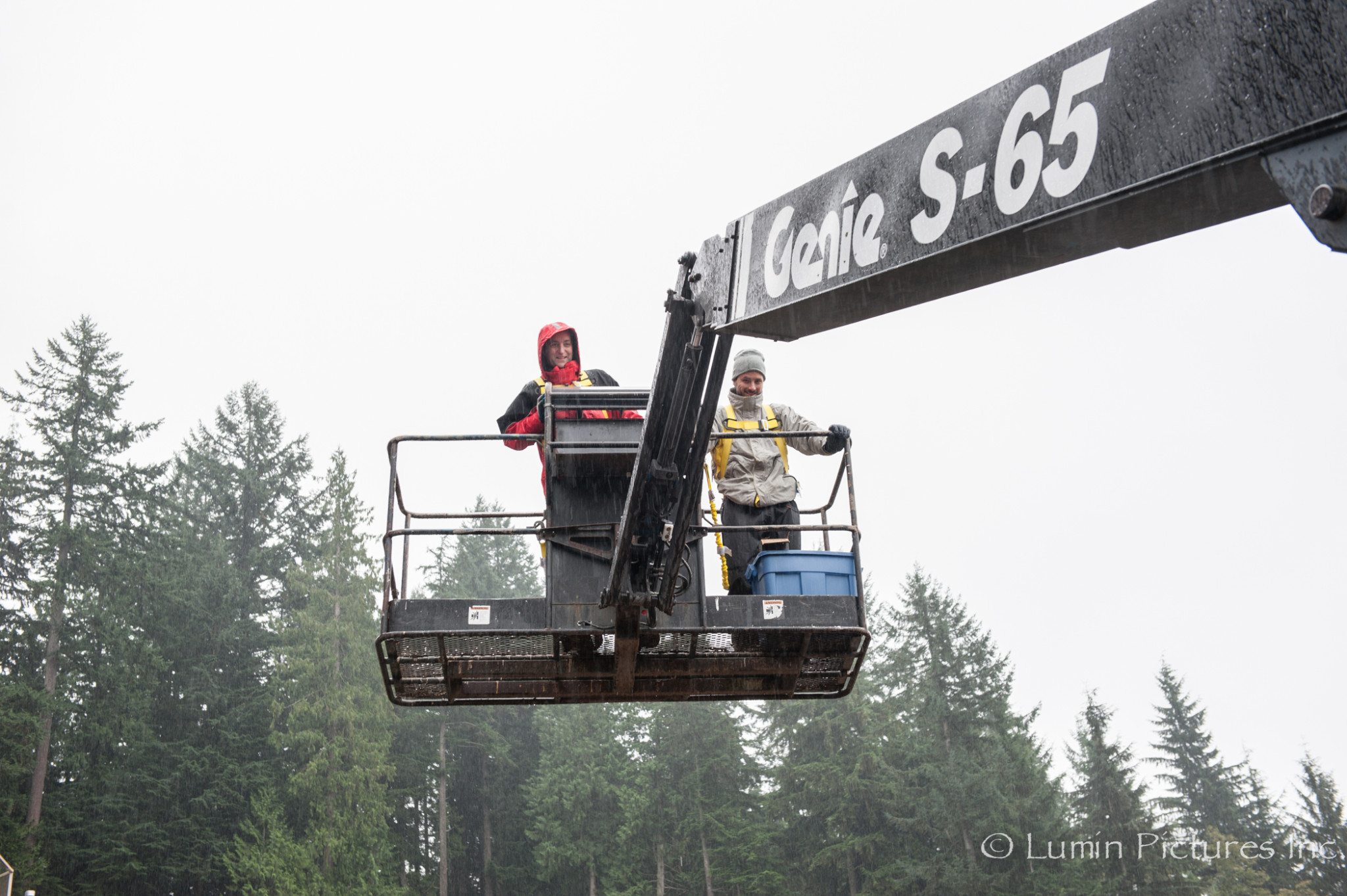 And the last question: why do you do it?

I was raised in a family that has always taught me the importance of volunteer work, helping others and being a positive member of a community. I suppose we do this with that belief in our minds. We began doing this years ago just because we love seeing how happy the display makes people. Once we realized how popular it was becoming, we knew we had an opportunity to support a charity.

This is now our fifth year of fundraising. We have chosen two charities and collect both food and money donations. Our charities are the Harvest Project, which helps people in need in North Vancouver. I think their slogan summarizes their work well, which is “Extending a hand up, not a hand out.”

My father John is also a Shriner. Half the money goes to Shriners Care for Kids, which gives access to pediatric care to children. To give an example, let’s say a little boy was fighting leukemia and the best treatment was in San Francisco, not here in Canada – Shiners Care for Kids would pay for that child’s medical bills and transportation costs.

In the end, I suppose, beyond these great charities, the family tradition, the Boxing Day additions and giving back to the community, the main reason we do it is quite simple – to make people happy.

What to bring: Warm clothes and a donation