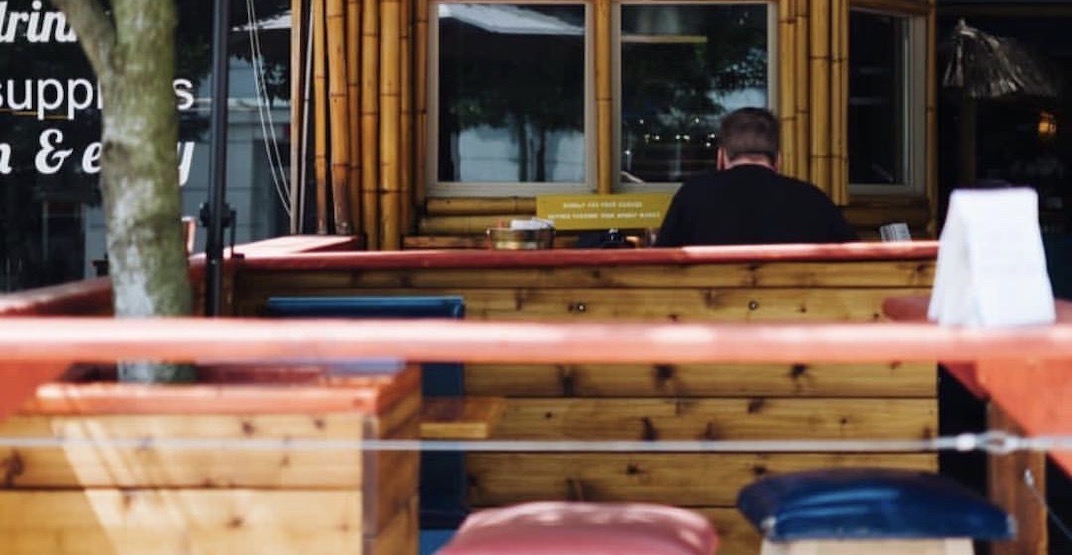 The City of North Vancouver has passed a motion to extend its patio program into the coming fall and winter.

The motion, which was submitted by Mayor Linda Buchanan, was passed unanimously earlier this week. Buchanan tells Daily Hive that 36 temporary patios have been established since May and that they’ve been a welcome addition to the city.

“I think, overwhelmingly, they’ve been really well received,” she tells Daily Hive in an interview. “This was all about supporting and expanding to the public right away so that there was space for people to continue to be physically distant from one another.”

Buchanan adds that she’s been in constant contact with Attorney General David Eby from the start, communicating that the program has “been incredibly successful.” And with the provincial government’s temporary patio plan set to expire in October, she reached out once again, saying that an extension is needed for businesses to stay afloat.

The provincial government’s temporary patio program allows for restaurants and breweries to expand their licensed area, allowing for larger patio spaces than what would normally be permitted.

“With newer guidelines that are in place for closing down early and moving into winter, it’s going to be really hard for the business community to hang on,” Buchanan stresses.

With the City of North Vancouver’s motion approved, staff will begin working with local restaurants and businesses on how to winterize those patios as the temperature begins to drop.

Buchanan says it’s a process that includes consultation with fire crews, the street team, and community development coming together, as well as collaboration with city staff in other municipalities.

Staff will also be looking at the possibility of winterizing parklets — modular public spaces that are typically built over reallocated parking spaces and include amenities like seating, tables, green spaces, art, or bike parking. 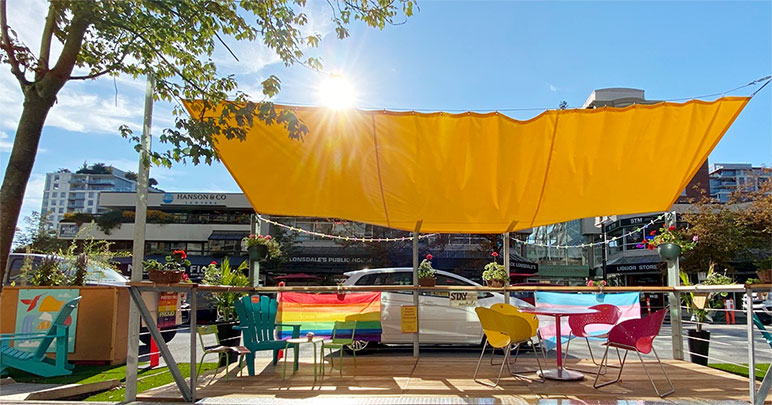 A Pride parklet located on the 1400 blocks of Lonsdale Avenue.

Buchanan explains that the city would rather keep them up than have to set them up again next spring and summer. She also adds that installations like parklets were part of the City’s vision even before the pandemic started.

“This has moved us in a direction that we were going anyway,” Buchanan says. “We’re looking at Lonsdale as a great high street. We’ve been able to move things forward very quickly and with many of the parklets, they’ll probably stay.”

North Vancouver’s parklets have ranged from pop-up patios, art installations with built-in seating, and even a converted shipping container. 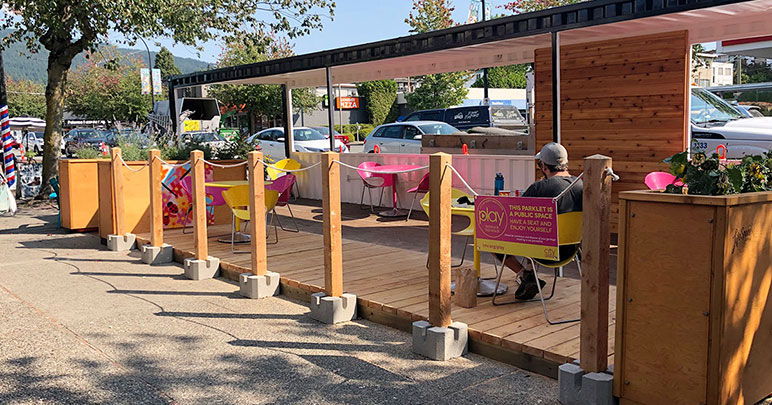 A shipping container parklet on the 1700 blocks of Lonsdale. (City of North Vancouver)

The mayor’s motion was also passed with an amendment that will launch “designated pickup zones” for businesses and restaurants in the coming months.

The pickup zones would be created in collaboration with local restaurant owners and help streamline contactless, curbside pickup.

“For us, a designated pickup zone might be something very simple for our staff to do,” Buchanan notes. “They might have to work with the businesses but they’re very keen.”

The mayor says that with all of these initiatives, they’ll be attempting to move as quickly as possible before the weather gets worse.

“We’re gonna move as quickly as we can with them,” she stresses. “Before the cold and wet weather comes we want to be able to have plans in place.”