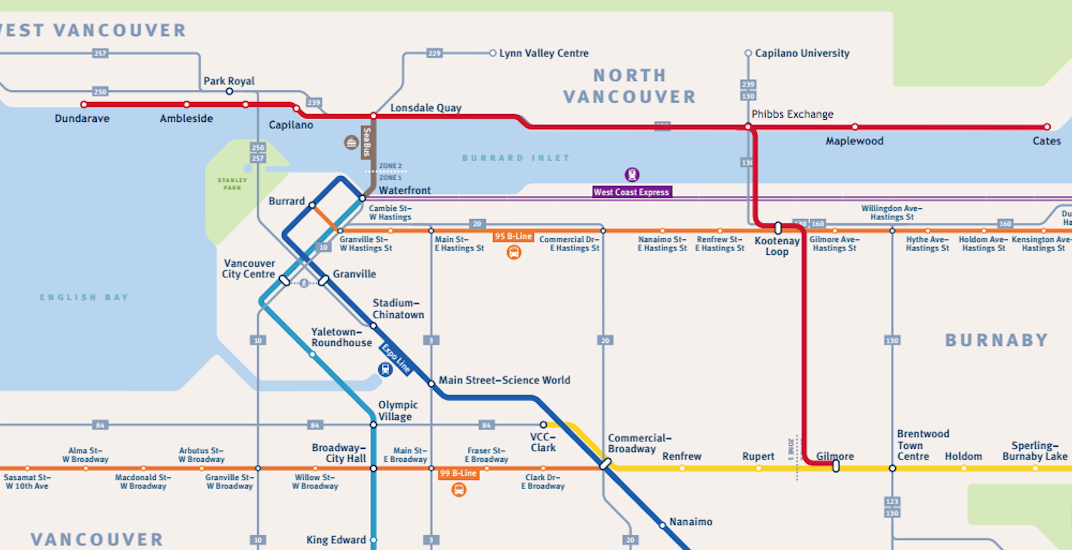 The BC Liberals’ MLA for North Vancouver-Seymour wants SkyTrain extended to the North Shore and has even a drafted her own vision of what the route could take.

“Traffic and transportation are the number one issues in my riding, but you can argue the entire North Shore,” Jane Thornthwaite told Daily Hive.

Her idea of rail rapid transit to the North Shore would be an extension of existing SkyTrain infrastructure, starting from Gilmore Station on the Millennium Line. From there, it would travel northwards, reach the Kootenay Loop, cross Burrard Inlet over the Second Narrows, serve Phibbs Exchange, and then split off into two spans traveling west and east on the North Shore.

The western span would reach Lonsdale Quay and potentially travel as far as Dundarave while the eastern span would serve areas like Maplewood and terminate at Deep Cove.

“It would have to be done in stages, and it would depend on where North Shore residents would like to see the line go,” she said.

Thornthwaite added that a new bridge crossing the Second Narrows could be built with separate tracks for both SkyTrain and freight railway, which would replace CN’s aging vertical lift railway bridge in the area.

She acknowledged that the North Shore would have to densify if SkyTrain were extended, and referenced how density came only after the other SkyTrain lines were built.

“If you build it, they (density) will come. But instead, people are saying North Vancouver’s only hope in getting any kind of SkyTrain infrastructure is to start densifying,” she said.

“We recognize that but there has to be an incentive for our residents to accept density, and that incentive would be SkyTrain.”

Of course, such a project is currently not in TransLink’s radar, as the public transit authority is focused on the Mayors’ Council 10-year plan, which has the Broadway extension and Surrey light rail as its biggest items.

But Thornthwaite wants the conversation to start now and have the idea gain some traction before those deliberations begin.

She is not the only prominent elected official on the North Shore to call for SkyTrain as North Vancouver Mayor Darrell Mussatto wants a feasibility study conducted.