Who is this moustached man that is supposed to lead the Canucks back to the postseason? Let’s find out.

The Canucks completed the wholesale “slate-cleaning” this past summer by hiring the most highly sought after coaching prospect of a busy NHL offseason. After the release of Mike Gillis and John Tortorella, new incumbents Trevor Linden and Jim Benning went out and got their man.

*It has to be years, because we cannot have another Torts situation. 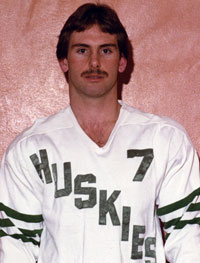 I mean… look at this guy.

Now, a diligent fan would take a look back at Desjardins’ career and see that he coached in Medicine Hat, Dallas, and with the Texas Stars. However, Desjardins did begin his hockey career as a player. Back in the day, he played for the a couple Bronco teams (Swift Current and Lethbridge), the University of Saskatchewan Huskies, won a Dutch League Championship with the Nijmegen Tigers, and even played for the Canucks! Yes, it would appear that Jim Benning and Trevor Linden aren’t the only former players to return to their for- “Oh, what’s that? Uh… got it”. Check that last statement, Willie the Kid (I’m just assuming that’s what they called him) played for the Moose Jaw Canucks of the Saskatchewan Junior Hockey League, not Vancouver. Whatever, I’ll take my (perceived) victories where I can get them. Somewhere along this journey (likely in a Njimegen saloon/bar), Desjardins figured out he wasn’t going to make the big time as a player and decided coaching was the way to go. Thank goodness for us! 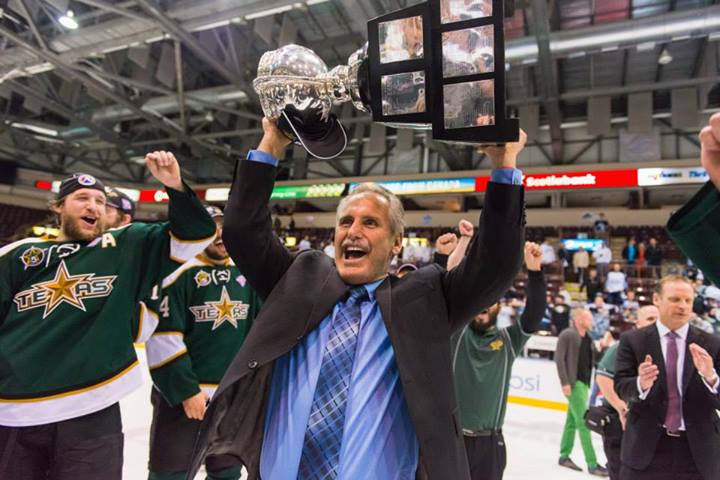 Desjardins started his head coaching career with the University of Calgary in 1989. After coaching in Japan with the Seibu Bears, Desjardins returned to Canada as the head coach of the Saskatoon Blades. In 2002, Desjardins seemingly got his big break as he was hired by the Medicine Hat Tigers and never looked back. From 2002-2010, Desjardins won two WHL Championships (2004 and 2007) and never missed the playoffs (that’s kind of his thing, by the way). It’s also worth noting that Desjardins took over as general manager for the 2005-2006 campaign. In 2012, after serving as assistant coach with the Dallas Stars for two years, Desjardins was appointed head coach of their AHL affiliate, the Texas Stars. In two years, Desjardins’ team made the playoffs twice and won the Calder Cup last year.

After the whole “John Tortorella experiment” last year, everyone around the Canucks was looking for something positive. Sure, bringing in Trevor Linden and Jim Benning are popular moves, but they’re not the ones that interact with players daily, on and off the ice. After giving the stiff arm to Pittsburgh, it became clear that Desjardins was looking for another opportunity: enter the Vancouver Canucks.

So, what does a 57-year-old with no head coaching experience in the NHL bring to a team searching for a new identity? If the months between when he was hired and now mean anything, the answer is: a lot. In stark contrast to the behavior of previous head coaches, Desjardins visited players in their hometowns over the summer, including Dan Hamhuis (Smithers, BC), Kevin Bieksa (Grimsby, Ontario), Alex Burrows (Montreal, Québec), and even the Sedin twins in Örnsköldsvik, Sweden. 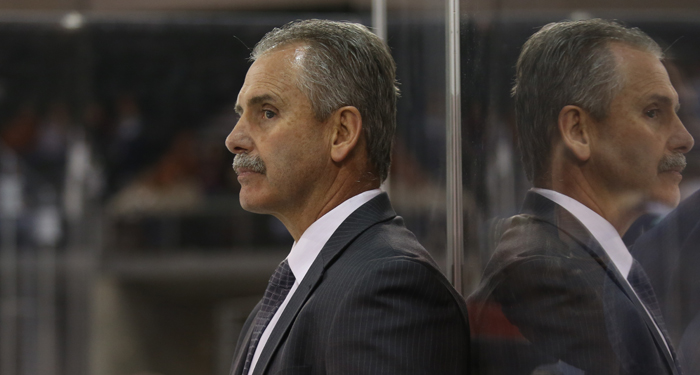 These kind of actions only amplify the notion that Desjardins is a “player’s coach”. According to Hamhuis, they “also had a chance to sit down and look through some things—his philosophies on coaching and what he sees for our team this year”. It seemed like every player he visited, and even ones he didn’t see over the summer, have found that there is a care and respect that emanates from Desjardins.

Desjardins has worked with several of these players before in Medicine Hat. Derek Dorsett was a Tiger from 2004-2007 and was a member of one of the WHL Championship teams, while Linden Vey finished up his four years in the WHL in 2011, notching 116 points in 69 games. The “winning pedigree” is another thing that Desjardins brings and these two players have experienced it before.

In many ways, Willie Desjardins is the opposite of John Tortorella. Yes, for the reasons mentioned above, but his style of play and systems also differ from the former Canucks bench boss. As opposed to the defensive style, shot blocking, Sedin penalty killing, etc. that we saw (and despised) last year, Desjardins has said on numerous occasions that he wants an up-tempo, skill, and speed based type of game. That’s music to the ears of fans and players alike. 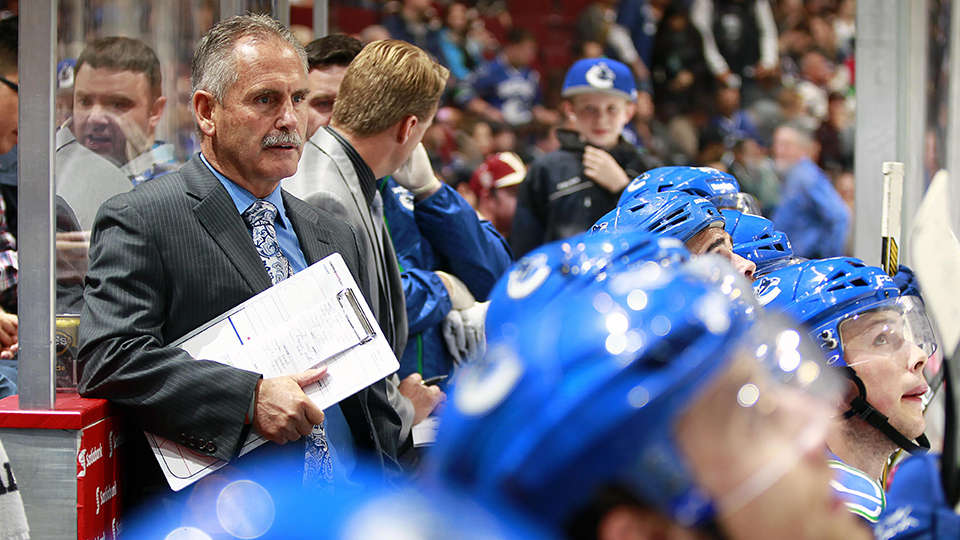 So, with thoughts of off-the-rush snipes and offensive zone cycles dancing in your head, is there anything else we should know and/or expect from a team with Desjardins at the helm? Well, he’s clearly shown an ability to work well with young players and that is extremely encouraging for a team that needs to inject some youth (Horvat, Shinkaruk, Jensen, Corrado, Virtanen, McCann) immediately and over the next couple of years. It would appear that if there is anyone that can succeed with these prospects, it’s Desjardins. Former junior players that Desjardins coached say, “He knows how to get the best out of each individual so that they can contribute to their team’s success.” That was in May of 2013.

The up-tempo style is no bluff either. During his two year tenure as head coach, the Texas Stars scored the most goals in the AHL (509). However, as some teams have discovered in the past, it’s important to keep the puck out of their own net. Desjardins’ Stars did that too.

Here’s how Desjardins’ Texas Stars performed over a two-year span in the AHL:

To provide some reference, the Stars scored 437 goals in the previous two seasons (2010-2011 and 2011-2012), and had a goal differential of -24. As widely publicized throughout and after last season, the Canucks were among the bottom feeders in goals for (27th) and goal differential (24th). If Desjardins can bring even a small amount of that offensive proficiency to the Vancouver Canucks, success is sure to follow.

Another statistic to keep in mind is accumulated penalty minutes. The Canucks were third in the NHL last year with 13.6 PIM/G (1115 PIM) behind only St. Louis and Philadelphia. The Texas Stars were the least penalized team over the last two years and it wasn’t even close. The Stars posted 923 PIM each year, and the average of the 2nd least penalized team over the same two years: 1013.5. So far this year, the Canucks look to be trending in the right direction. Albeit in a small sample size, the Canucks are already averaging 1.2 PIM less than last year.

Also with regard to special teams, when the Canucks have been on the man advantage, they’ve looked dangerous. It looks as if powerplay coach Glen Gulutzan and Desjardins are letting the Sedins “do their thing”, which is exciting for anyone who likes behind the back, no look passes and wicked one-timers from Radim Vrbata. Lost in the Sedinary of it all, Linden Vey has acted as a rover, moving around the offensive zone, getting lost in traffic, and making himself available for a high quality scoring chance. Exhibit A, Vey’s third goal of the season, on the powerplay against Carolina:

From the start, it appeared Desjardins had designs on specific line combinations. Through the preseason and in the early going of the regular season, he’s been steadfast in his commitment to keeping those lines together. Even in blowout losses against Colorado and Dallas, the constant line mixing of the past that Canucks fans have become accustomed to thanks to years of the patented Vigneault shuffle and Torts’ year of whatever that was seems to be just that: the past. Playing the Sedins with Vrbata has produced one of the best lines in the NHL so far this season. Also, no player on the Canucks is averaging less than 10 minutes per game, and you have to believe that will have positive consequences as the season goes on. Last year, 5 players with 10 games or more averaged less than 8 minutes!

Arguably one of the most important changes made by Willie Desjardins has been surrounding the attitude towards the Canucks’ goalies, Ryan Miller and Eddie Lack. For years, the dreaded “goaltending controversy” has swirled around Vancouver. With Eddie Lack’s sensational preseason, and Ryan Miller playing just okay, there was more than enough material for goaltending anarchists to rally around. Thankfully and finally, it appears Desjardins is bringing some stability to the position. Ryan Miller has the only 6 wins of the season thus far, but has had a few hiccups along the way. It was the start in St. Louis against the Blues that really set the record straight. Even after Miller getting shelled against Dallas and taking into account Eddie Lack’s exceptional record against St. Louis (3-0-0, 1.00 GAA, .960 SV%), Desjardins went with the veteran netminder saying, “he’s played a long time in the NHL and he deserves certain things… There are certain things you deserve because of what you’ve done in the league”. In fact, after Ryan Miller was pulled against Dallas, Desjardins went down the bench, patted him on the back, and told him he was starting in St. Louis. That is confidence in your goalie and it seems, at least so far, the craziness that is Vancouver Canucks media and expectations has not penetrated the steely resolve and level head of Willie Desjardins. Thank goodness.

I’ve said all along that it’s going to be difficult for the Canucks to have a season worse than last year. So many things went wrong and when they did, it seemed like there was something else around the corner to compound the issues (think goaltending controversy and Heritage Classic). Letting go of Kesler and Garrison, and signing Ryan Miller, has produced mixed reactions. Bringing in new management has been viewed as an overwhelmingly positive development. Attempting to develop some young talent at the professional level seems encouraging too. However, the choice to hire Willie Desjardins as the next head coach of the Vancouver Canucks may be the most impactful offseason decision in years. I guess we’ll all have to wait until March or April to see if Wilbrod Desjardins of Climax, Saskatchewan can continue his Nicklas Lidstrom-like run of consecutive playoff appearances. Here’s to hoping he does.