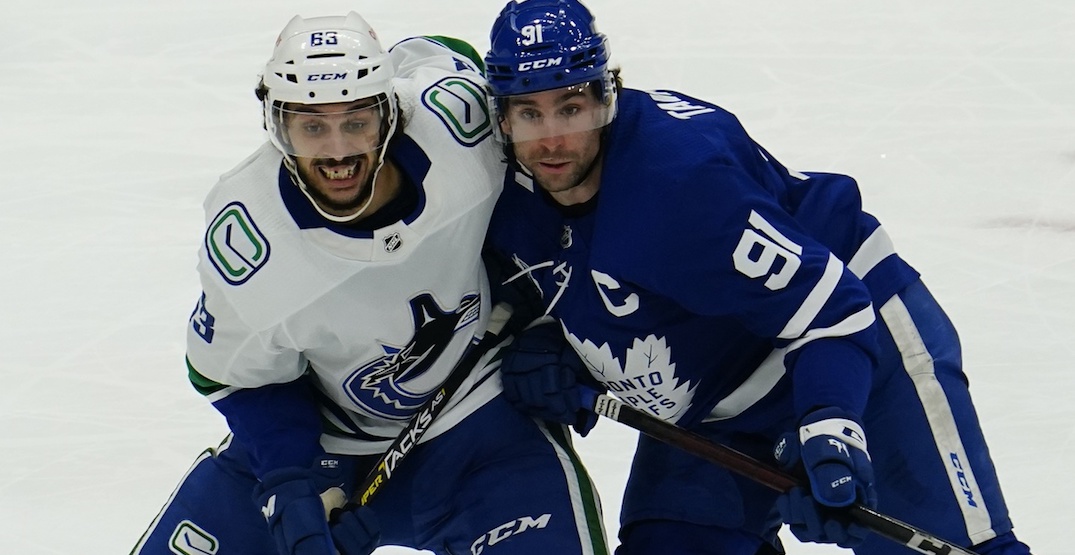 The NHL has never been short of ways to upset their fans.

Log onto Twitter or Facebook on any given day and it probably won’t take you too long to find someone beefing with the league’s commissioner, Gary Bettman, or just the general operation of the league at large.

Having been through three lockouts in the NHL within the last 30 years and having a history of being behind when it comes to social issues and player safety, there are many legitimate criticisms to be had about the fourth most popular big-four sport in North America.

But whoever at the NHL decided — or maybe, rather, was forced to — come up with the idea of an all-Canadian division? You absolutely nailed it.

Here ares some options on how to keep the essence of the division in a more “normal” season next year (fingers crossed!).

The NHL’s best option for a full season

Assuming a majority of players will be vaccinated by whenever the 2021-22 season gets underway, it’s very unlikely we’ll ever see a divisional-only schedule again anytime soon as travel restrictions ease.

But here’s a basic attempt at how the NHL could keep the essence of the division together under 82 games: a new “rivalry schedule” that highlights all-Canadian games, as well as regional rivalries for American teams.

Probably the most realistic option, the NHL could expand the schedule for each opponent to include five ‘rivalry’ matchups against six opponents each year, on a rotational basis if necessary.

Using Toronto as a baseline, here’s one mocked up schedule for a total of 82 games:

This is just attempt one, of course it can be be tweaked. Run a 1-8 format or do four teams per division making the playoffs. Create two new conferences. If you need eight teams to make it even, throw Buffalo or Detroit into the mix and continue calling it the “North Division.”

Heck, bring back the 2019-20 divisions and conferences but ensure that Canadian and rivalry matchups are protected.

People will complain initially. But also? Nobody needs to see Ottawa play the Nashville Predators more than once. And conversely, no one in Nashville needs to see Ottawa. Milk the heck out of the local and national rivalries across the league and the product will be better overall.

Quite honestly, strength of schedule arguments are for goobers. Play 82 games every year, and it’ll all even out eventually as teams adapt (this is not an exact science). Just beat whoever you’ve got lined up in front of you and win 16 playoff games.

Another less exciting option could include keeping the divisions mostly as-is (with tweaks to be made to accommodate Seattle), but ensuring at least four Canadian matchups each season.

For American teams, they could intermingle in similar rivalry-based non-divisional cohorts. I am not a mathematician. I just want to see Connor McDavid and Auston Matthews face off more than twice a year until the end of time. Is that too much to ask?

Sure, some teams may get the short end of the stick with who the NHL faces in their rivalry groups. Seattle and Vancouver might not get to play as much as everyone would like, for one.

But it doesn’t have to necessarily be such a rigid schedule each year.  If anything, this year (just like the 2013 season) has proved how exciting a chaotic, short term race to the playoffs can be. Add as much intrigue as you can to the playoff race instead of pitting teams that simply exist together in the same time zone.

Run the schedule on a two-or-three year rotational basis if you’d like. At the end of the day, no management team should change their roster or development based on who they might play one or two more games a year.

The added Canadian content in the schedule helps to create a sense of faux-nostalgia and reignite dormant rivalries while creating new ones.

It’s great for TV ratings, starting Twitter fights, and most importantly of all, it generates a buzz around the game you can’t really find from a Tuesday night game between Calgary and Florida. There’s absolutely no way anyone involved prefers seeing a random American opponent face off a Canadian one instead of having two teams with national ties face off.

It’ll also strengthen ties between other markets league wide, no matter where they are located across the continent. The NHL has been fun-averse for much of the last century, but here would be a killer opportunity to give the fans what they want.

And hey, while we’re asking for things? Why not put every Canadian game on national TV? No one benefits from blackout restrictions.

Consider this free advice, Gary. We’ll be counting on you.