Heading into the NHL All-Star game, it seemed destined to be a PR disaster.

Big name players dropping out of the game at the last second.

And the John Scott elephant in the NHL’s room, the debate over whether he’d be allowed to play in the game he was voted into.

Luckily for the NHL, they showed (eventually) their support for John Scott and he partook in the All-Star weekend.

The new format really worked, to the point where the final game was a defensive minded affair, ending in a 1-0 victory for the down-trodden Pacific Division.

They found players to replace some of the big names, and to be honest, it was fine. It would have been nice to have Ovechkin and Toews there, but nobody was going to shine more than John Scott at the game.

And shine he did. The big man had two goals, he laid out Patrick Kane with a body check (a gentle one, but still), and he once again rode the fan wave of support to beat out the hand picked MVPs the NHL suggested for the game.

OMG they didn't list John Scott among MVP candidates. It's either Luongo, Hall or Gaudreau. #NHLAllStar

John Scott made the game fun, something it hasn’t been for many years. He looked like a kid in a candy store whose parents had just given him $20 to go nuts.

Many All-Star players enter the weekend with the fatigue of the season hanging over their heads. Their status as top line players often demanding more from them, leaving them little energy to enjoy the weekend for what it is. Not so for John Scott, and it was his infectious joy of loving his All-Star experience that seemed to spread everywhere he went.

In short, it was the best NHL All-Star game in recent memory, a game that finally touched on that nerve the NHL should always be looking for: the love of hockey.

Make no mistake about it, the John Scott situation was the perfect storm that will never be re-created by the NHL. It read more like a WWE produced story line than anything else. You half expected John Scott to deliver a stunner to Gary Bettman after getting the million dollar cheque. 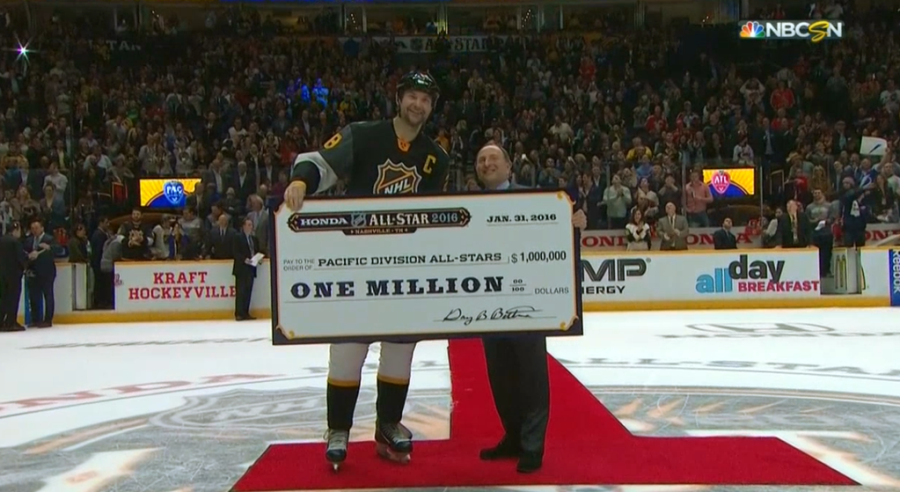 So for John Scott to not only play in the All-Star game, but to score two goals, and to win the MVP? That was a victory for hockey, not just John Scott. That was a victory for people who grew up loving and playing the sport. It let people remember that at the end of the day, this is a game we love, not a business. A sentiment the NHL repeatedly stabs in the heart anytime a lockout occurs.

And that’s what also made it so effective. You almost kind of want to hope the NHL did it on purpose, because at least that would show awareness, versus the tone deaf appearance it looked to be. They’ll certainly take credit for the success now, and we will see how future All-Star games are handled, but at least for one day, the people’s voices were heard, and listened to.

It felt kind of good, you know?

Anyhow, here’s what went down at the rest of the All-Star game.

For the final we are pairing Leo Komarov with futur teammate @RealStamkos91……. I kid I kid #NHLAllStar

In the surprise upset of the day, the Pacific Division, the laughing stock of the NHL, managed the upset win over the stacked Central Division.

This whole conversation is legendary. pic.twitter.com/Tr4T548qgk

There aren’t as many highlights for this last game because my HD capture device refused to work the rest of the game, but there weren’t many goals to record anyhow. It was a battle of the goalie, and once again Luongo showcasing why he’s one of the best.

Bishop gets interfered. No goal. pic.twitter.com/yCeElHBqjO

Tell me this isn’t just the BEST. pic.twitter.com/LKwcNyAyIh

It isn’t hyperbole to suggest this was the best All-Star game seen in many years. The weekend, for all the concerns leading up to it, really came together quite nicely. The hockey, while it will never equal actual NHL action, was much closer to the actual product than years past. There was something fun about watching All-Stars having to earn their open ice a bit more than just having opposing players just stare as they fly past them. It makes the goals feel more satisfying knowing there was some actual push-back on them.

I know I said in the intro that the NHL will never be able to replicate what went down today, but I do hope they try and honor it for future games. I think every year the teams should submit one player to be on the ballot as the “Unsung All-Star”. Whether it’s a veteran back up goalie, or a guy who never complains about his fourth line duty, they should celebrate the guys who show up to work and do everything they can to make it and stay in the NHL.

As John Scott said in his moving piece in the Players Tribune , the fact he’s made it to the NHL counts for something. He’s worked his ass off to get there, and there should be no shame in celebrating players of that caliber. The idea that the All-Star game is some sacred ground that a player like him shouldn’t have been allowed to is ridiculous. Celebrate the All-Stars, sure, but don’t forget the other players who help get them there. Celebrate the love of hockey that binds us all together.

John Scott is your #NHLAllStar MVP, and the crowd in Nashville loves it. https://t.co/PrAu3YZsX1