Vancouver will be kicking off 2016 in style with its first major free, public New Year’s Eve celebration event in more than a decade.

The festival, presented by Concord Pacific, along Canada Place Way on the downtown Vancouver waterfront will begin at 6 p.m. It features a free outdoor concert from the 102.7 The PEAK Stage, food trucks, sponsor activities, and two high-aerial fireworks shows as the finales for the countdowns.

At the stroke of midnight, the event will climax with a spectacular 11-minute-long fireworks display.

The Midnight Fireworks are synchronized to a soundtrack that will be played live on local radio station 102.7 The PEAK FM. As well, for those at home, there will be a live television broadcast of the fireworks on Global B.C.

Places to watch the fireworks

Both the Early Eve and Midnight Fireworks displays will be launched from a barge anchored in the middle of Coal Harbour – just west of the Canada Place pier and north of the Vancouver Convention Centre’s West Building. The position of the fireworks barge is similar to Canada Day.

The fireworks will be viewable from the parks and seawall around Coal Harbour in downtown Vancouver and the Londsale waterfront in North Vancouver, but revellers are encouraged to watch the fireworks from Canada Place Way – to take in the full New Year’s Eve countdown experience programming at the 102.7 The PEAK Stage.

Unlike the Celebration of Light, the fireworks will not be visible from English Bay and Kitsilano. 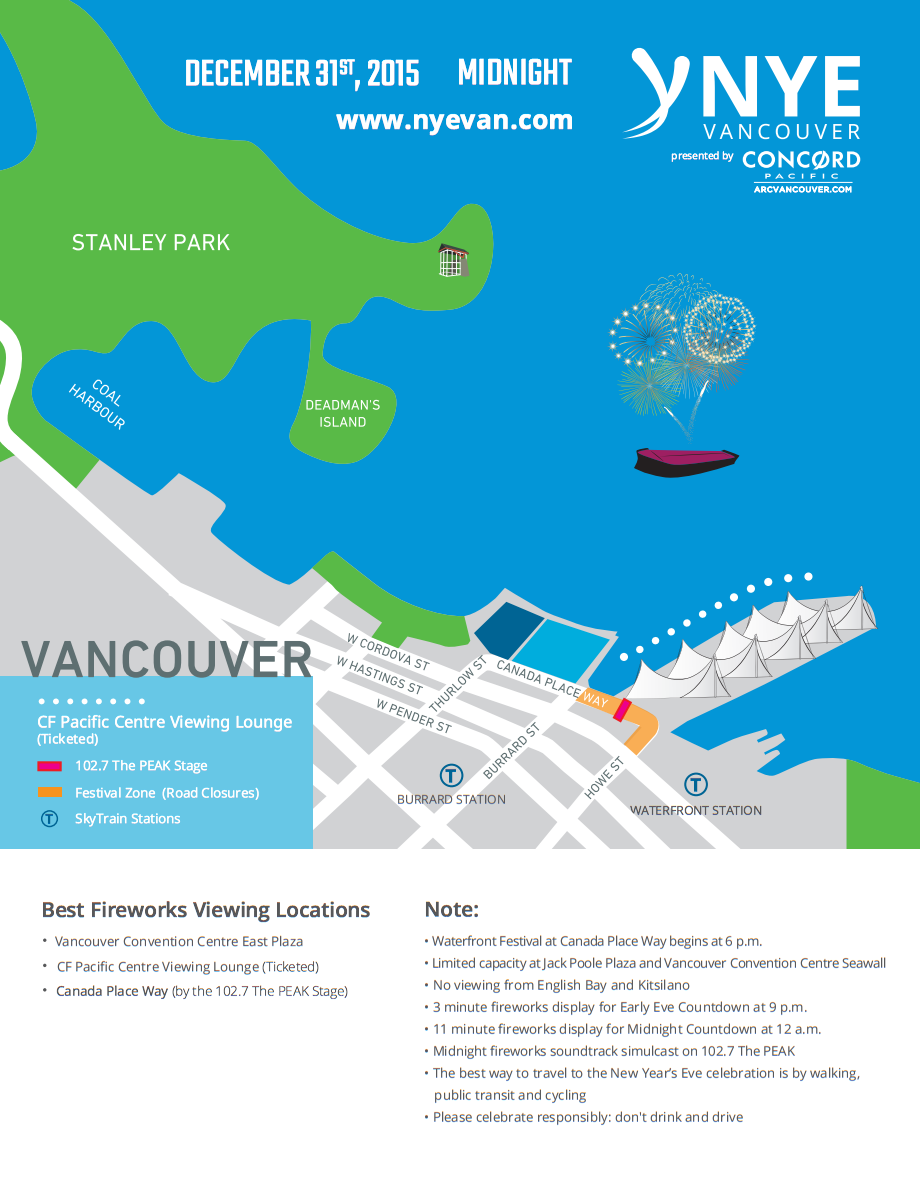 From 5 p.m. on December 31 to 5 a.m. on January 1, TransLink will be offering free public transit so that revellers can get to and from their New Year’s Eve celebrations safely. SkyTrain and SeaBus service hours have been extended by one hour; the last trains and ferry departing Waterfront Station will leave just after 2 a.m.

Buses will operate on their regular weekday schedules and a number of bus routes will also be making additional late-night trips.