I first met Scott Sueme back in 2011 when I was finishing up school and had just started working at Catalog Gallery in Gastown. Sueme was working with the same gallery on a large outdoor installation for the Okanagan Crush Pad Winery in Summerland, B.C. Since then, I’ve had to pleasure to become good friends with the artist and have been able to witness the progression of his work and style.

I was excited to sit down with Sueme recently to talk about his latest series of paintings, Arena, that are showing from now till March 28 at Kimoto Gallery at 1525 West 6th Avenue. Definitely stop by the gallery to see his work in person and check out my interview with the artist below.

Sueme’s latest series, ‘Arena’ marks a new exploration that studies elements of form in recreational landscapes. Partly inspired by his youth spent on soccer fields and backyard basketball courts, Sueme aims to capture the unconsidered stillness and geometry designed for regulation in courts, pools, and public spaces. A use of flat colour refines elements to their basic structure while a textural underpainting allows for complexity and variance. The geometric forms create a sense of depth with an emphasis on perspective and pattern set in playful and inviting spaces.

‘The balance between our desire to create spontaneously and to be bound by rules is something I find present in both painting and in our most entertaining games and sports. In this series each piece suggests an anticipation for action, play, or familiar recollection.’ 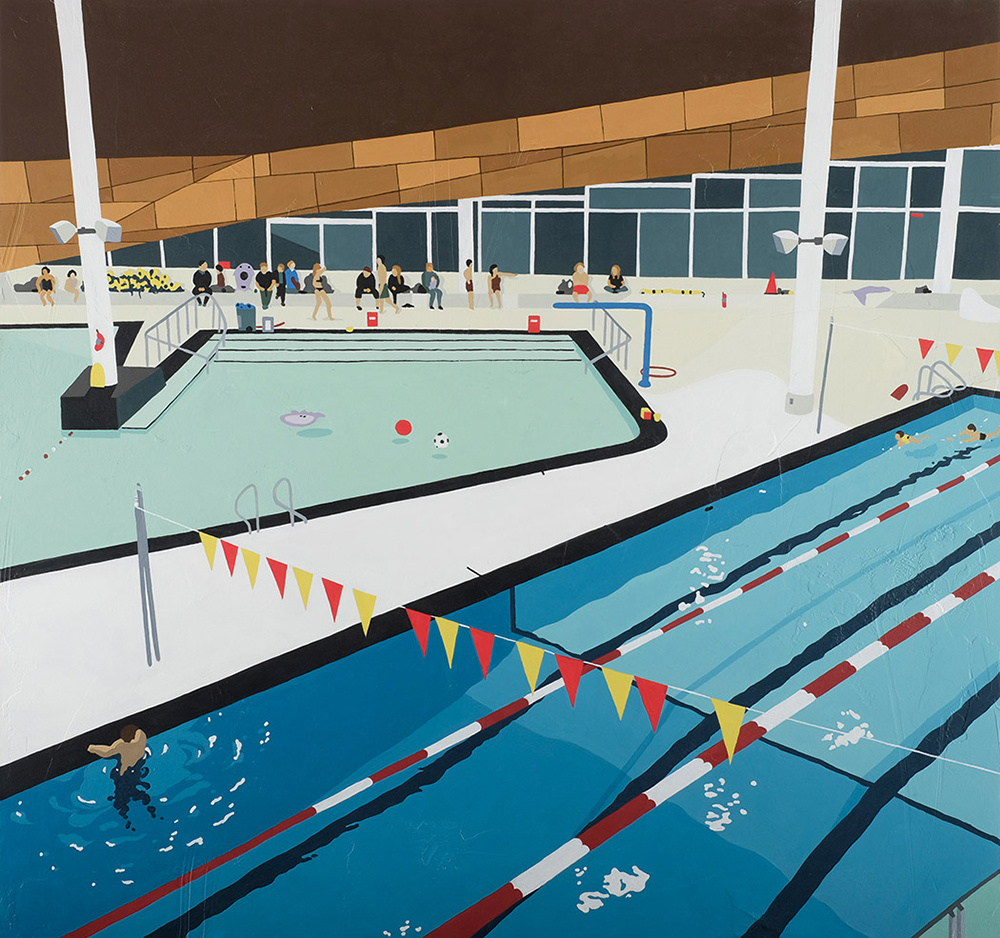 Where did you get your inspiration for this series?

Well, I have a background in landscape painting so I wanted to do something related to that. I also wanted to find a theme that worked with my background as a geometric and abstract painter. Looking back at some of my earlier influences as a kid, the idea of play and recreational sports was something I found very enjoyable. Many of the paintings from the Arena series were inspired by these recreational spaces; places that are available to the public for play and enjoyment.

I find these areas really interesting, especially in a city like Vancouver where space is so limited and with condos costing as much as they do. So it’s kind of funny to come across a space that has been exclusively designated for basketball or soccer. How each space has value to them, and how it’s up to you to make sure that they’re being used and that you’re having fun in them.

When did you start landscape painting?

It was sort of a transition from pure abstract work. Like working with shapes, geometry and colour theory, which was the focus of my work previously. There was a desire to create situations for them and to create a narrative that was more than just depicting shapes and compositions. That was when the landscape thing started to happen for me. At the time, it was never super literal, like sitting in front of a valley and painting exactly that. It started with geometry and grew into creating picture planes where these shapes would occupy a fantasy environment, and that’s what lead to landscape painting.

This series is the closest I have ever come to a traditional landscape painting. Even though it’s very graphic, it’s literal to what was in front of me. Working from photographs that I’ve taken, creating compositions, then going through the painting process. 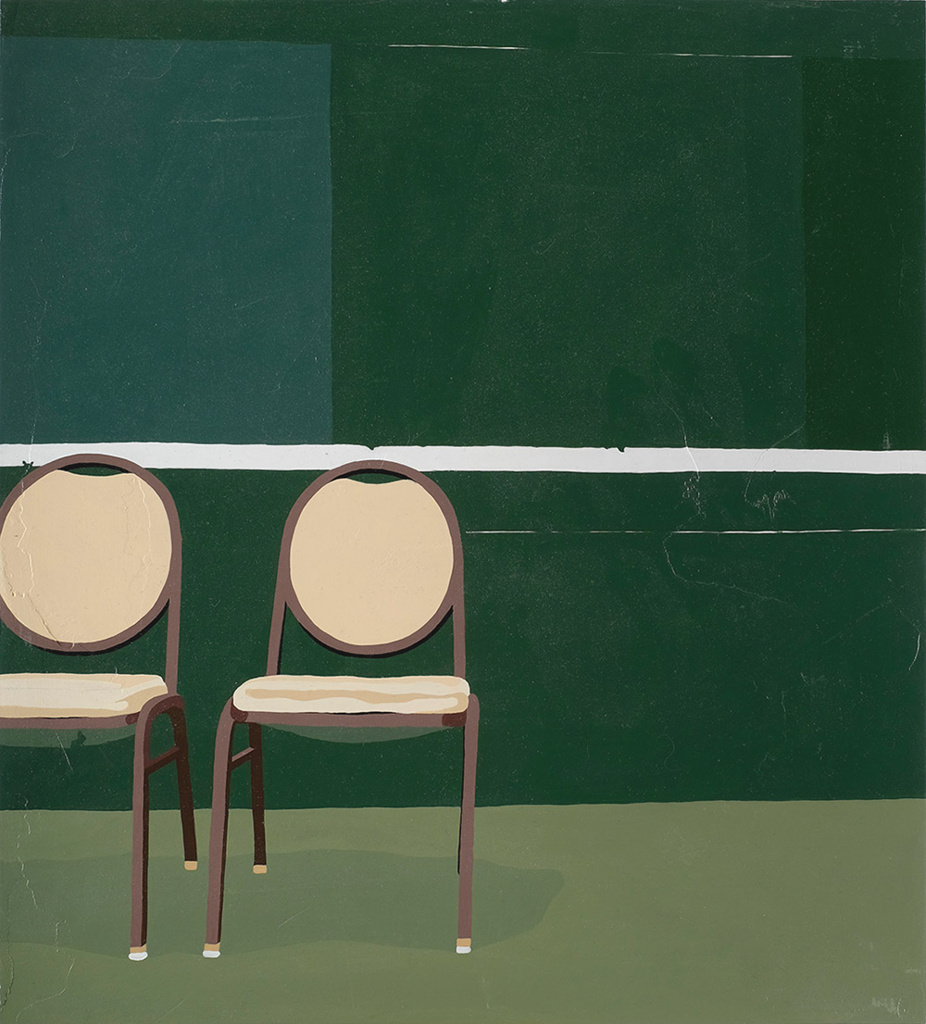 Originally you’re a graffiti writer, and that’s where you started artistically. Do you often find yourself using graffiti techniques when painting?

Yes, definitely. I’ve worked with the graffiti aesthetic for so long, just by creating stuff that nods to the different marks i’d make in graffiti or abstractions of those marks. For this particular series, however, I wanted to somewhat break away from that. Although, I cannot fully remove the influence because it’s so ingrained in my practice. Like the way I pick colours and the way I work with hard edged shapes, that’s something that builds in my work from graffiti. Someone not knowing who I was might not necessarily get that right way, but it’s definitely there.

What mediums and/or materials did you use for this series and why?

Well going back to the graffiti thing, the most common tool is spray paint which I didn’t actually use in this series. I used a lot of house paints and acrylics. Housepaints are a common medium to use in graffiti when you roll out a background. I also like the quantities that they come in, it’s really easy to mix colours, and the overall look and feel of the piece afterwards is subdued but with bright colours. Working with that material is easy for me because i’m trained as a commercial artist and those paints are very common in my practice.

I also used a little plaster to create texture, to break up some of the flat color and to mimic some of the exterior surfaces that i’ve worked on. It creates sort of a heritage feel and warrants a distressed wall which is a nice and forgiving surface to paint on.

It can be a bit of both, but I definitely favour exterior house paints because they’re a bit more durable. All the paintings in this series were varnished with a protective coating as well. House paints can be quite flat looking so the varnish really enriches the colour and protects the painting.

So all the colours you used in this series were custom mixes?

Yeah, so in my studio I have an inventory of all these different house paint colours. Depending on the scale of the painting, I may go to the store to pick up a couple small batches of a really dominant colour. I’ll also create mixes from the other paints I have and from primary tints, like red, yellow and blue, that way I can create and mix every colour as I need it. 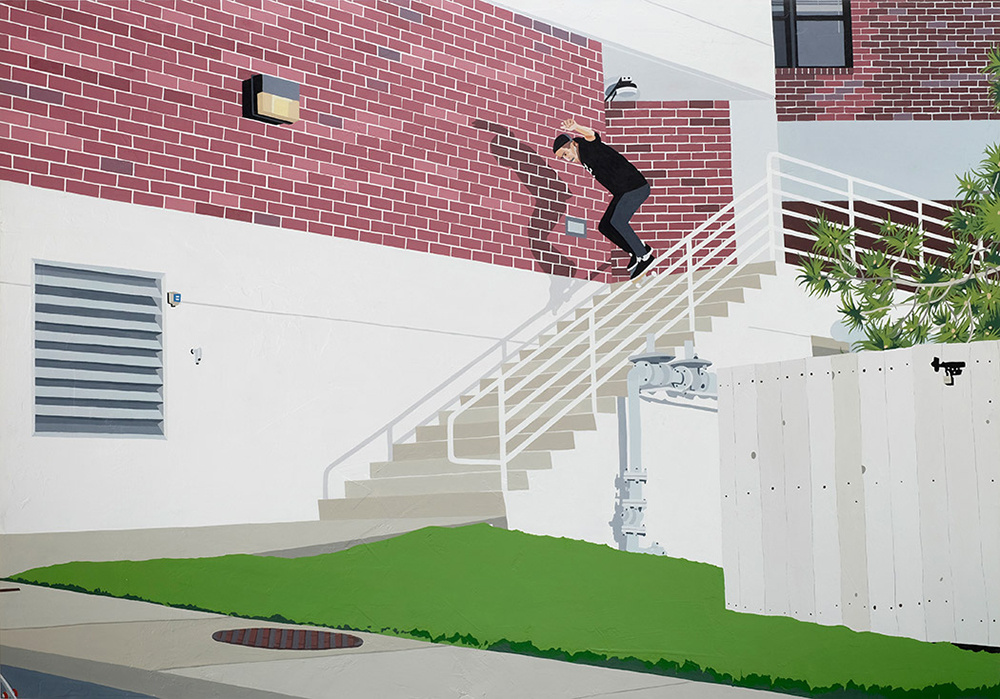 So you mentioned earlier that you used mostly photos as references for this series. Were they all photos that you’ve taken? Or did you have other references?

One of the bigger pieces that I painted was actually a photo by Gabe Morford, a skateboarding photographer. So I did this huge 60×40 painting of skateboarder Ernie Torres. I was just cruising on some blogs when I saw the photo while I was conceptualizing work for the show. I was paying attention to the architecture, the shadows, the flatness of colours and the landscape as well. When I came across image, it was almost like a match made in heaven. So I reached out to Gabe and he was ok with letting me use it. I just felt it was such a good fit for the series.

Tell me about the use of perspective in your series.

Creating that illusion of perspective was really interesting, especially when the paintings were illustrated so flatly. When you stand back [from the work] the lines of the courts allude to this illusion of depth that you’re seeing. That was something I was trying to keep a keen eye out for.

Any ideas on what you’re going to do next?

I’m excited to work on another series and hopefully i’ll have time in December to do that. I’ll probably continue on the same plane I am now, but I want to obscure the images even more. More in the design phase and trying to find ways to break up the landscape. That’s something I’ve just started thinking about.