Vancouver is a multi-cultural hub. . .no news flash here. Just glancing around at places to eat one can see the variety quite easily. While Vancouver is known for some of the best Japanese, Chinese and Indian food outside of Asia, there is one culinary culture that has always been woefully under-represented when Vancouverites decide where to eat out: the Philippines. Even though they are our 3rd largest minority group and almost 100,000 Filipinos call Vancouver home, when was the last time you went out for Filipino food? Never? That’s all about to change.

Fliptop Filipino Fusion is the brainchild of brother and sister duo Jay and Christine Ocol and is Vancouver’s first Filipino food truck. It’s easy enough to spot, thanks to the killer Filipino flag graffiti mural that adorns their meals on wheels. They decided that Vancouver needed more Filipino food and armed with Jay’s high-end chef experience, a few tried-and-true family recipes, some creative flair and the support of Vancouver’s Filipino community, Fliptop is putting Vancouver’s foodies on notice. Filipino food is not going to be an after-thought any longer.

Where do you start when many people have never sampled Filipino cooking? Fliptop is aware that many of their patrons are new to Filipino food and have structured their menu accordingly. While I was there I heard lots of chatter about the Pacman Pandesal Sliders (named after favourite son Manny Pacquiao, I presume). I’m from Alberta and love beef on a bun but these are something uniquely Filipino. The angus beef is marinaded in a citrus soy concoction and then topped with carrots, pickled red cabbage, crispy leeks and hoisin mayo and placed on a freshly baked pendesal bun, which is a salt bread that has been popular in the Philipines since the arrival of the Conquistadors. The two buns you get with your order make a perfect quick lunch and the orders were steady while I was there. Looked awesome.

I had the hunger and am a ginormous fan of cheesesteaks, so I went with the Flippin’ Adobo “Fili” Cheesesteak, a generous sandwich that would give any “Philly” cheesesteak a run for its money. With the spicy adobo sauce, melted provolone, smoked chipotle aioli and crispy, light, deep-fried leeks, this sandwich is absolutely phenomenal. Trust me, it has to be tasted to be truly believed. While $12 might seem like a lot for a food cart sandwich, rest assured that this sandwich is better than most sit-down restaurants dream of making. It doesn’t get bogged down with too many ingredients and too many flavours, instead delivering a simple yet sophisticated flavour that was quite new to my experienced tastebuds. It is now one of my favourite menu items offered by any Vancouver food cart.

Jay and Christine made sure I also tried another Fliptop favourite, Lumpia. When I opened my box of food I was initially disappointed. My lumpia looked suspiciously like an ordinary spring roll. Then I took a bite. It was packed with succulent veggies and was maybe the most dense spring roll I’ve ever had. The rice wrap was deep-fried perfectly, creating the perfect fried shell for my vegetable intake. It might look like a spring roll and taste similar to a spring roll but this is from the Ocol family recipes and I promise you, it’s not your everyday spring roll. 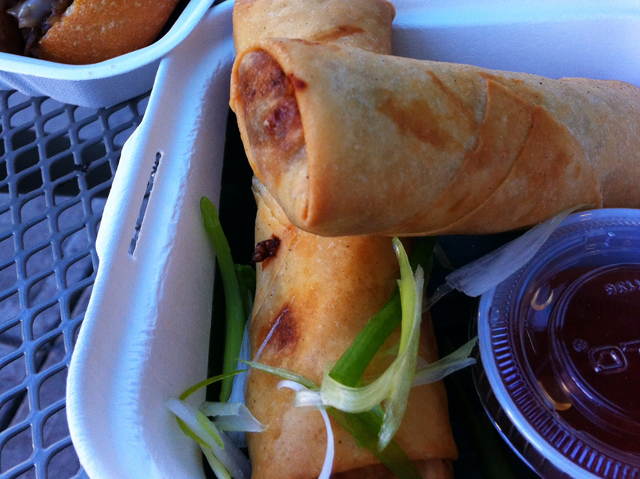 Other items you can order include a pulled pork sandwich with pickled papaya, bbq pork skewers, turon brulee (a spring roll banana hybrid with caramel) and other occasional specials that Jay whips up (like Pinoy Poutine!). Wash it all down with a Sarsi, the official root beer of the Philipines, and you’ve got yourself a full meal deal. 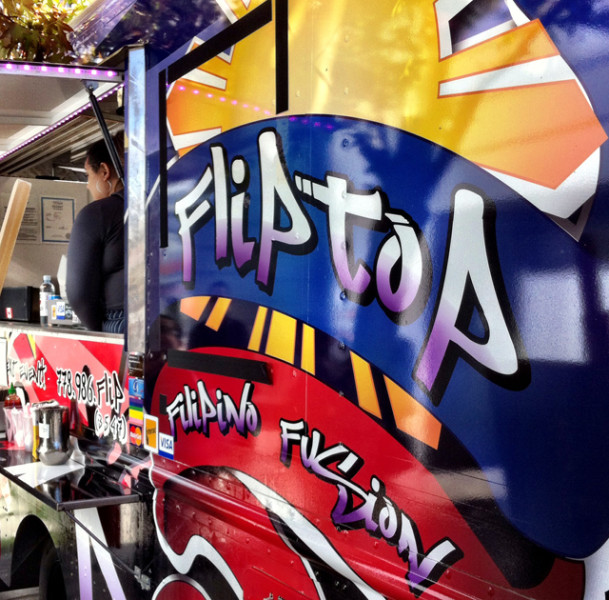 Fliptop has only been open for a matter of weeks but they have already developed a following amongst the Filipino community. Follow them on Facebook or Twitter to find out where they’ll be touching down next and go check them out. If Fliptop is any indication, it won’t be long before Filipino food is Vancouver’s latest culinary trend.

Location: Usually on 8th & Cambie (in front of Whole Foods)

Hours: Wednesday to Friday from 11:30 a.m. to 3 p.m. (Closed Monday & Tuesday); often around on weekends, check the Facebook or Twitter page for updates