The North Plaza of the Vancouver Art Gallery, facing West Georgia Street, is slated for a major renovation with a complete redesign of the space.

An unsightly layer of bark mulch replaced the North Plaza’s grassy lawns before the 2010 Olympics, and the state of the public space has been the subject of much critique given that it is at a high-profile location within the Central Business District and is used by a number of major annual events and festivals.

To put it bluntly, the plaza is an embarrassment to the city.

But a new proposal commissioned by the City of Vancouver and designed by Nick Milkovich Architects aims to revitalize the space to give the city the heart it deserves.

The design will gut the entire plaza, removing the bark mulch, existing pavement, and the broken fountain. The area will be flattened and covered with a new pattern of custom precast pavers, made of three custom colours, and accent granite to give the new surface an appearance of a web of trapezoids.

The pink concrete paving around Robson Square will be extended along Howe and Hornby Streets and wrap around the West Georgia street sidewalk to establish the precinct’s identity as originally planned.

Existing trees on the plaza will be removed and replanted with the same variety, with rows of four trees on the west side of the plaza facing Hornby Street to create a bosque. A single row of trees will also be planted on the north side along West Georgia Street, seemingly closing off the plaza – preventing the crowds of large events from spilling over onto the road.

“The bosque is intended to create a room within a room, where the large scale of the plaza is brought down to a more human scale,” reads the design description by the architects. “The canopy of the trees will create shelter, shade and provide seasonal beauty to the space.”

On the east side of the plaza facing Howe Street, the driveway and gates will also be removed. A pavilion will be built along the plaza’s edge along Howe Street to use as a stage backdrop and a location for food and beverage services while also providing a visual buffer between the open space and the blank facade of TD Tower across the street.

The pavilion will be lit as a lantern at nighttime and reflect daylight off its metal fins during daytime. It will even double as a bus shelter for Howe Street bus routes.

A variety of seating types will be offered in the redesign, including fixed furniture and moveable seating to accommodate the flexibility needs of large events. Fixed wooden benches, with and without brackets, will be located on the perimeter of the plaza and large platform seating on corner of Howe and Georgia streets will be attractive to larger groups of people or even as small stages for performers.

Some event and festival infrastructure will be built into the plaza, such as power connections at multiple locations and tall light poles on either side.

The new open space concept and hard surface will likely be welcome news to event organizers, who have long called for a need for more event-friendly spaces in the city – especially at this plaza.

“The plaza is host to many of the City’s most significant programmed festivals, as well as political demonstrations,” the description continues. “Currently, both the layout of events, and the safety of large gatherings of people are compromised by many awkwardly placed obstacles in the plaza.”

The results of a City questionnaire indicates that respondents wanted the plaza used for festivals, events, and enjoying food and public art. They want it as a place to slow down and sit, like an urban European plaza – a formal civic square that is flat, open and paved.

Respondents of the questionnaire wanted the fountain and bark mulch removed and did not want green space or another park. Minimalism and functionality are important design principles to follow.

Almost exactly two years ago, three design concepts were proposed for the plaza, with designs varying from large water features to even a giant overhead ‘halo’ ring public art installation that glows at night.

Earlier this year, the plaza was closed to allow for the first phase of the plaza renewal project – the replacement of the layer of membrane, which has been leaking water into the Vancouver Art Gallery’s underground vaults.

The City of Vancouver will be holding a community open house on the proposed design next Thursday, November 26 from 5 to 8 p.m. at UBC Robson Square. The provincial government must approve any changes proposed by the City as the North Plaza is owned by Province and leased to the City for use as a public space. 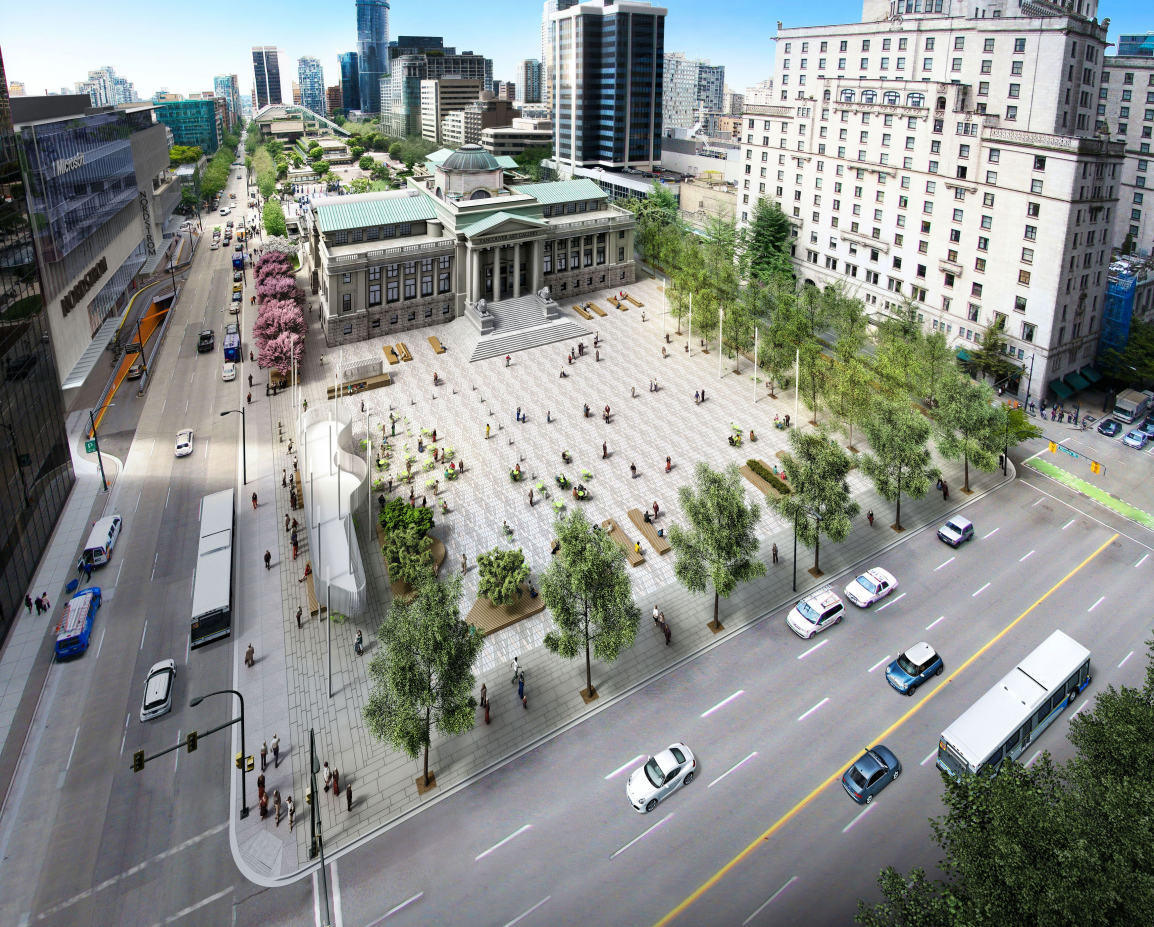 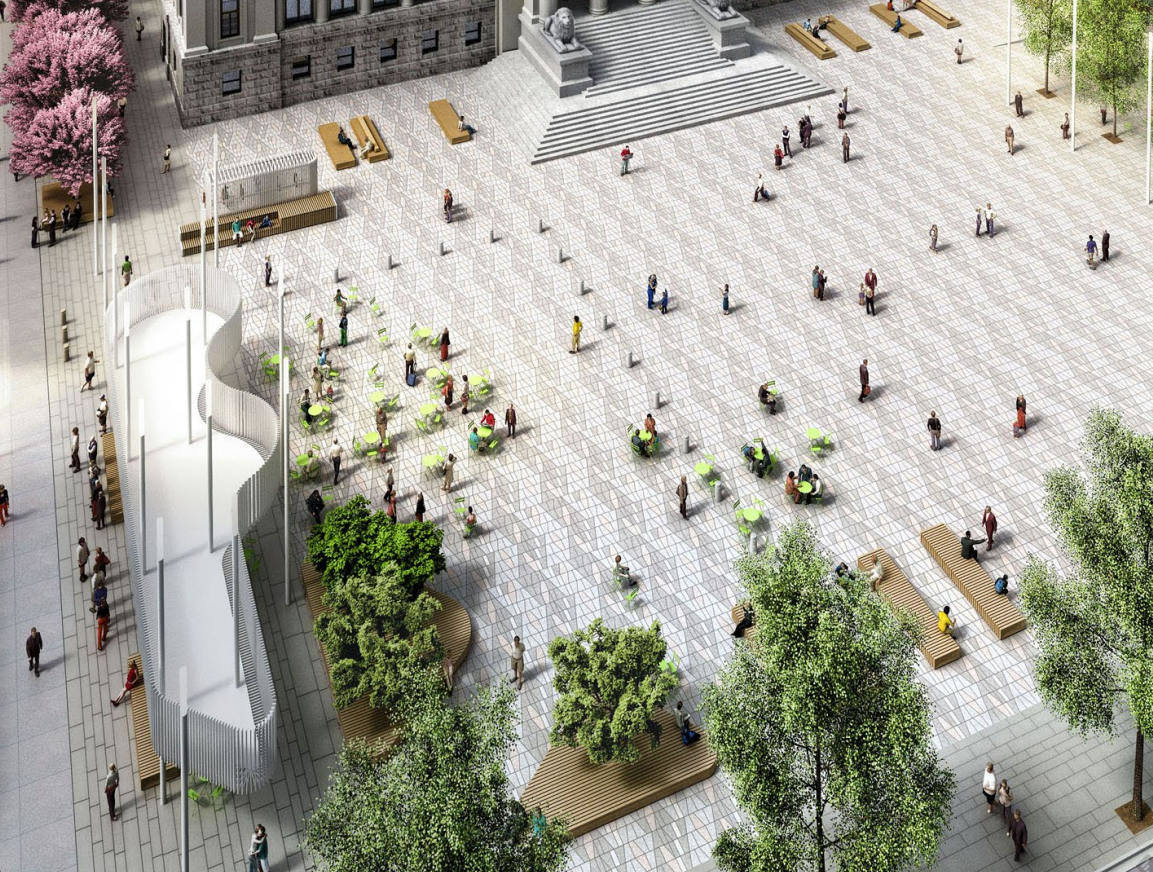 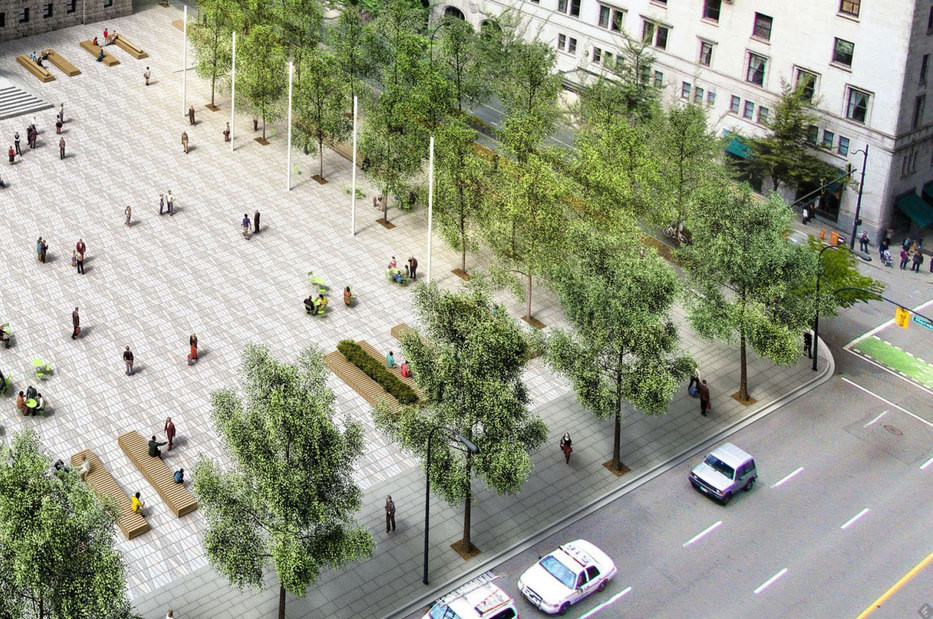 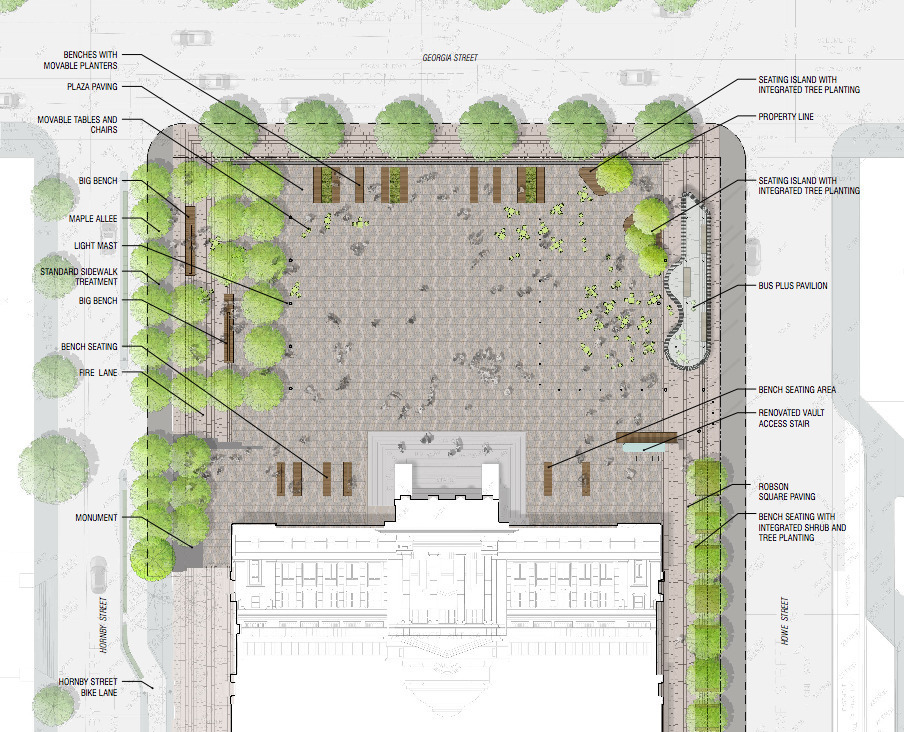