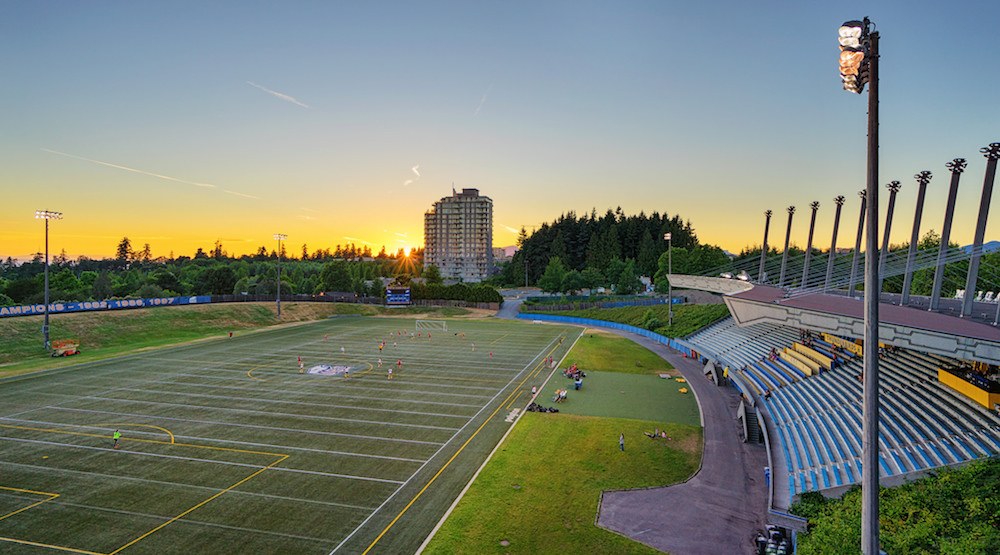 A new outdoor multi-purpose stadium, for football, soccer, concerts, and other events, could be built at a new site on the University of British Columbia’s Point Grey campus to replace the existing 1967-built Thunderbird Stadium. The university is considering a number of options as the 5,000-seat stadium requires major upgrades and does not meet the athletics and events needs of the campus.

A 2012 study that evaluated the seismic condition of all campus buildings found that Thunderbird Stadium is at a ‘very high’ risk for a collapse in the event of an earthquake. Additionally, the stadium has seating with poor sight-lines from certain areas, inadequate dressing rooms that are not directly connected to the field of play, and away from the growing cluster of athletics facilities currently being built at Thunderbird Park.

This is all part of the university’s proposal of creating two distinct sports hubs on campus – a Spectator Hub in and around Thunderbird Park and a recreation hub in and around War Memorial Gymnasium, which could also be retrofitted or replaced.

With Thunderbird Stadium, five options are being considered ranging from a retrofit of the stadium to building a new 5,000-seat facility on other sites near or within Thunderbird Park.

If a new stadium is build elsewhere, housing could potentially be constructed on the site of Thunderbird Arena and Whit Matthews Field, with development revenues going towards the cost of constructing a new stadium and increasing the institution’s University Endowment Fund.

“Some of the options include moving it to the other locations, and that will allow a bigger neighbourhood housing area,” he said. “There’s net new revenue for the university.”

But two options of relocating the stadium to another site on campus would place it near residential neighbourhoods, potentially creating conflicts with neighbours over noise and traffic generated by the sports events and concerts the facility would likely hold.

Residents of condominium towers constructed near Thunderbird Stadium in the early 2000s led to noise complaints for events held at the venue, including the now-canceled Arts County Fair. Students found themselves fighting for the survival of events commonly associated with campus life.

“Regardless of the location, the existing location or any other location, managing events is always a priority for the university,” he continued. “Organizers do have to follow protocols for event management, such as noise and traffic management. The fact is that we have a stadium on campus now, and those issues are managed and we continue to manage this regardless of the stadium location.”

White noted that the AMS Block Party, the successor of the Arts County Fair, will be held at University Commons Square this year – the big paved space in front of the Nest Student Union Building and Alumni Centre.

Here are the various Thunderbird Stadium retrofit and relocation options:

Renovation of the existing stadium

A basic renovation of the stadium to address the structure’s seismic issues and deferred maintenance could cost $10 million while a complete renovation that includes expanded seating, new roof, and improved dressing room space could cost $25 million. Another $50 million would be spent to construct a new Athletics Centre of Excellence on the north end of the stadium. 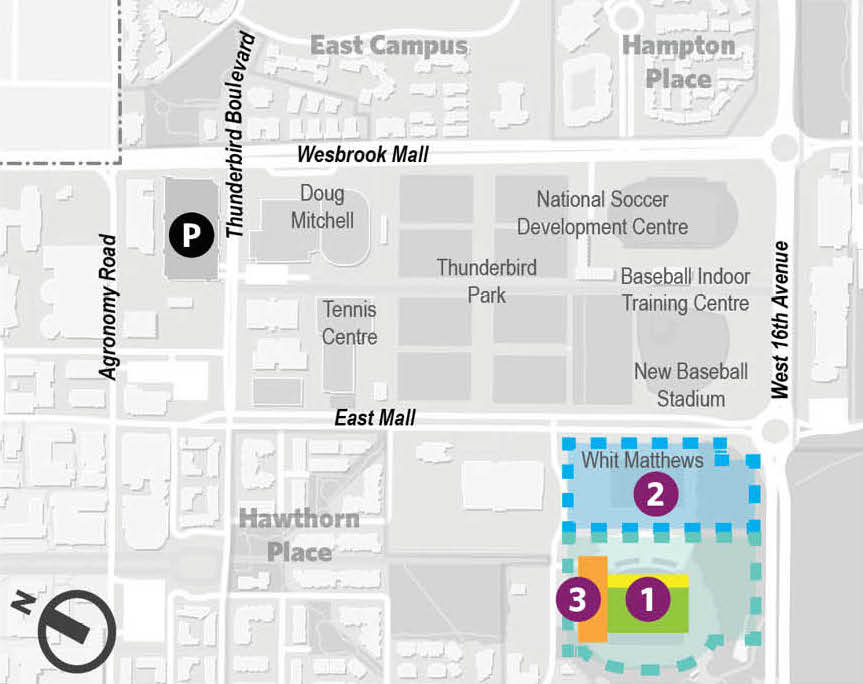 Whit Matthews Field, the large field immediately east of Thunderbird Stadium, could become the site of a new stadium and Athletics Centre of Excellence. The combined cost of both facilities on the site is estimated at $80 million. 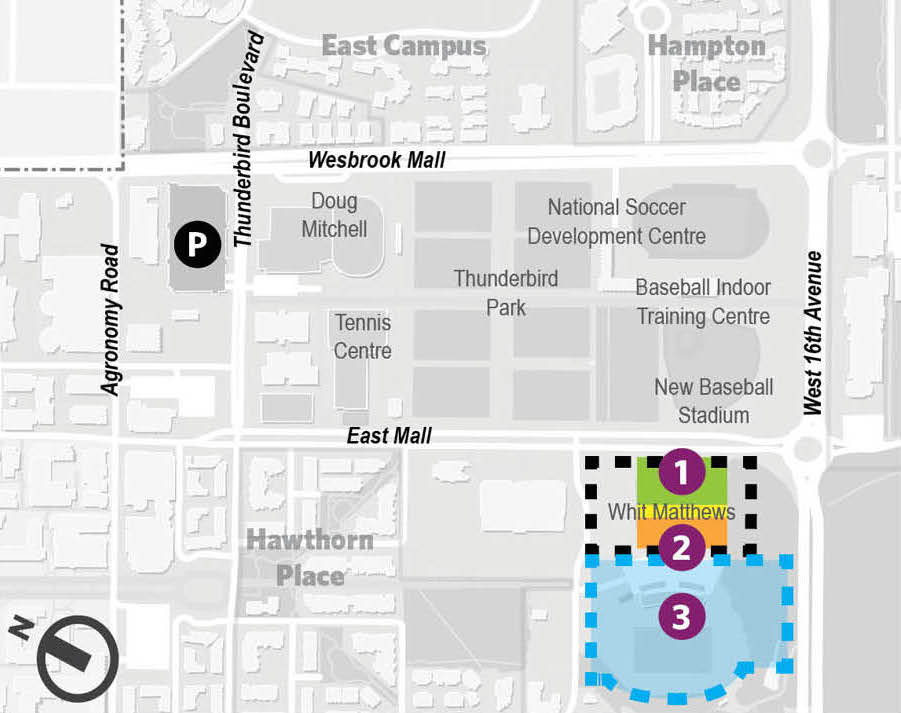 Built six years ago, Rashpal Dhillon Track & Field Oval on the northwest corner of West 16th Avenue and Wesbrook Mall at Thunderbird Park could be demolished for the site of a new stadium. It would position the facility immediately adjacent to the Vancouver Whitecaps FC’s $32-million National Soccer Development Centre, which is currently under construction, and the recently completed Baseball Indoor Training Centre.

However, this location could be the most problematic for noise and traffic complaints given that the site is right next to long-established residential neighbourhoods, namely Hampton Place.

The total cost for this option, including the new Athletics Centre of Excellence, is $85 million. 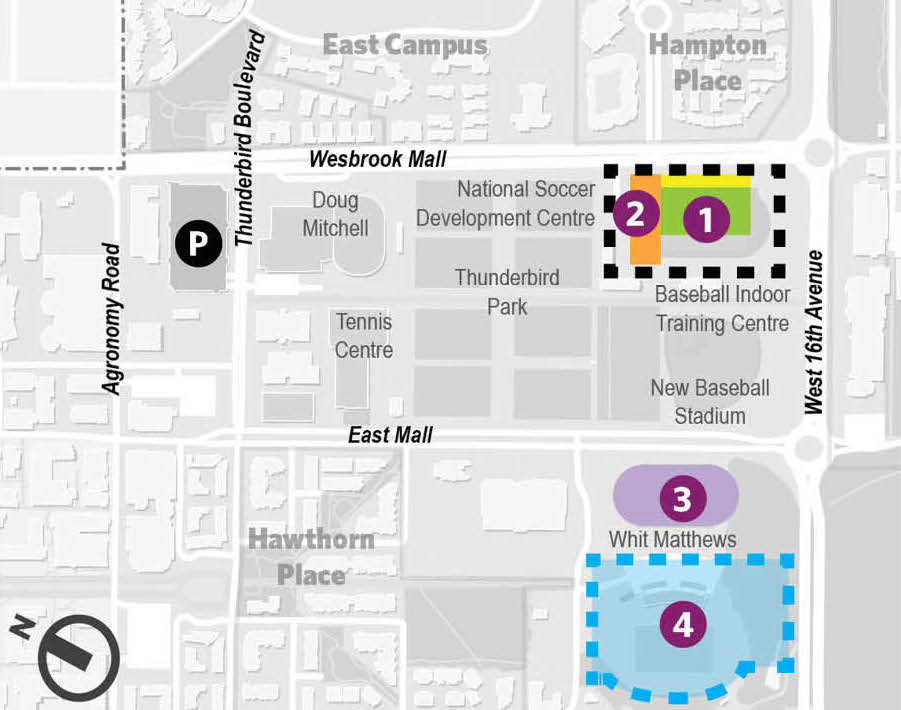 The Robert F. Osborne Centre buildings, located next to Doug Mitchell Thunderbird Arena and UBC Tennis Centre, that house the UBC School of Kinesiology would be demolished in this option. As well, the footprint of the stadium would necessitate the closure of Thunderbird Boulevard from the East Mall to the arena, the removal of the Tennis Centre’s bubble facility, and the demolition of the recently constructed skatepark at the corner of Thunderbird Boulevard and Health Sciences Mall.

In this scenario, a new skatepark would be built on the southwest corner of Wesbrook Mall and Thunderbird Boulevard, next to the arena, and the academic programs currently at the Osborne Centre would find a new home at the new Athletics Centre of Excellence. A new tennis bubble would be situated on the west side of the tennis centre.

Given the level of disruption and requirement to relocate a number of facilities, this option is the most expensive at an estimated $105 million. It would also place the stadium next to the Hawthorn Place residences. 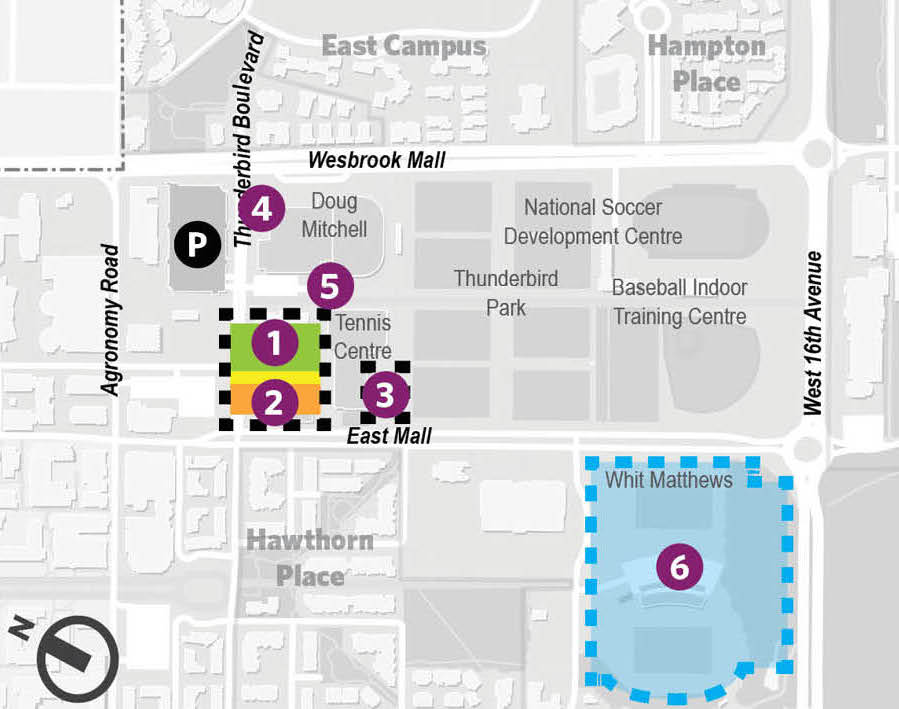 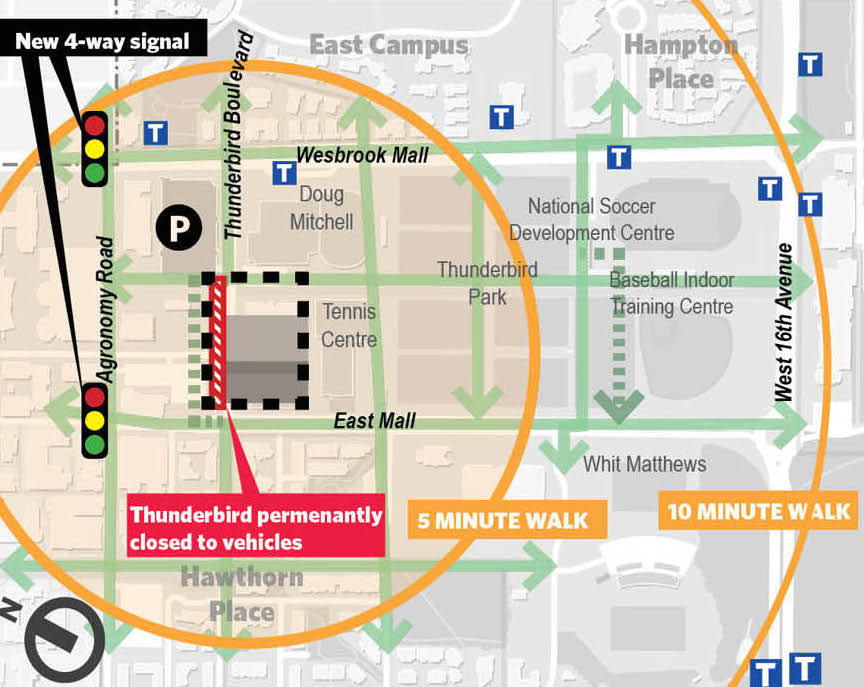 A new stadium would be constructed at Whit Matthews Field adjacent to the existing Thunderbird Stadium, but the planned Athletics Centre of Excellence would be located elsewhere on campus – on the site of the existing tennis bubble. 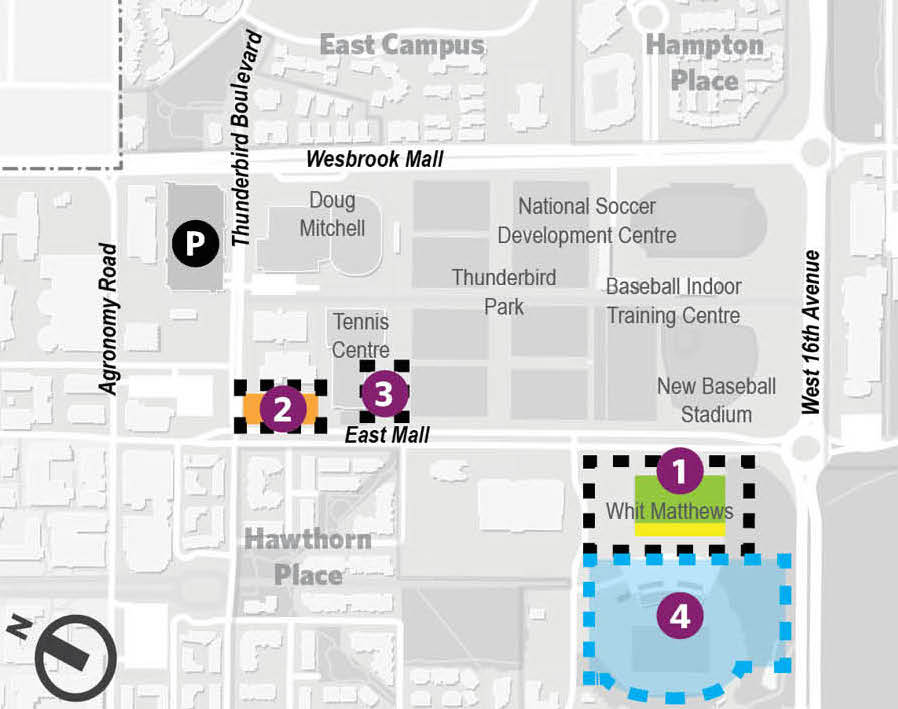