The Expo and Millennium lines will receive a much-needed capacity relief this summer with the introduction of 28 additional SkyTrain cars into the system.

A new $90.7-million fleet of seven four-car fully articulated trains will complement the existing rolling stock running on the original SkyTrain lines. The new generation Mark III trains from Bombardier were ordered at a cost of $90.7-million just in time for the opening of the Evergreen extension of the Millennium Line, which was originally scheduled for a mid-summer opening.

According to TransLink spokesperson Cheryl Ziola, the new trains will be able to accommodate more passengers as each four-car train is interconnected by walk-through gangways, allowing passengers to move freely from the end to end of each train.

Three seats have been removed at the ends of the cars to provide more accessible and suitable spaces for bicycles, luggage, and standing passengers. Overall, the cars have a greater combined seating and standing capacity compared to the older models.

“We did not increase the seating capacity as we wanted to ensure enough room to easily accommodate passengers with wheelchairs, scooters or strollers,” Ziola told Vancity Buzz.

The original Expo-era Mark I cars have a design capacity of 80 passengers per car, including 36 seats. The Mark II cars ordered for the Millennium Line’s opening in 2002 carry 130 passengers, with space for 42 seats.

When the new Mark III fleet is introduced, some of the Mark I cars will be coupled into six-car trains – into trains with a length that will almost occupy the entire 80-metre station platforms.

Aside from a greater passenger capacity, the Mark III cars also feature an improved LED lighting system, new passenger doors designed to reduce noise, and significantly larger side windows that extend down to the waist level. The windows at the end of the trains, above the hidden manual driver dashboard, are also full width.

The trains were built at Bombardier’s plants in Kingston, Ontario and Plattsburgh, New York. The first train set arrived at the operations and maintenance centre in Burnaby in October 2015. All of the cars are being shipped separately across the country by flatbed truck.

Improvements to the Commercial-Broadway Station interchange, including a new third platform for the Expo Line and another pedestrian overpass over Broadway to the Millennium Line platforms, will be completed by spring 2017. The cost for the latest phase in station upgrades has been pegged at $60 million.

TransLink anticipates a 25% increase in foot traffic at Commercial-Broadway Station once the Evergreen extension opens. Trains for the Millennium Line will run from VCC-Clark to the Coquitlam terminus every three minutes during peak and mid-day hours. 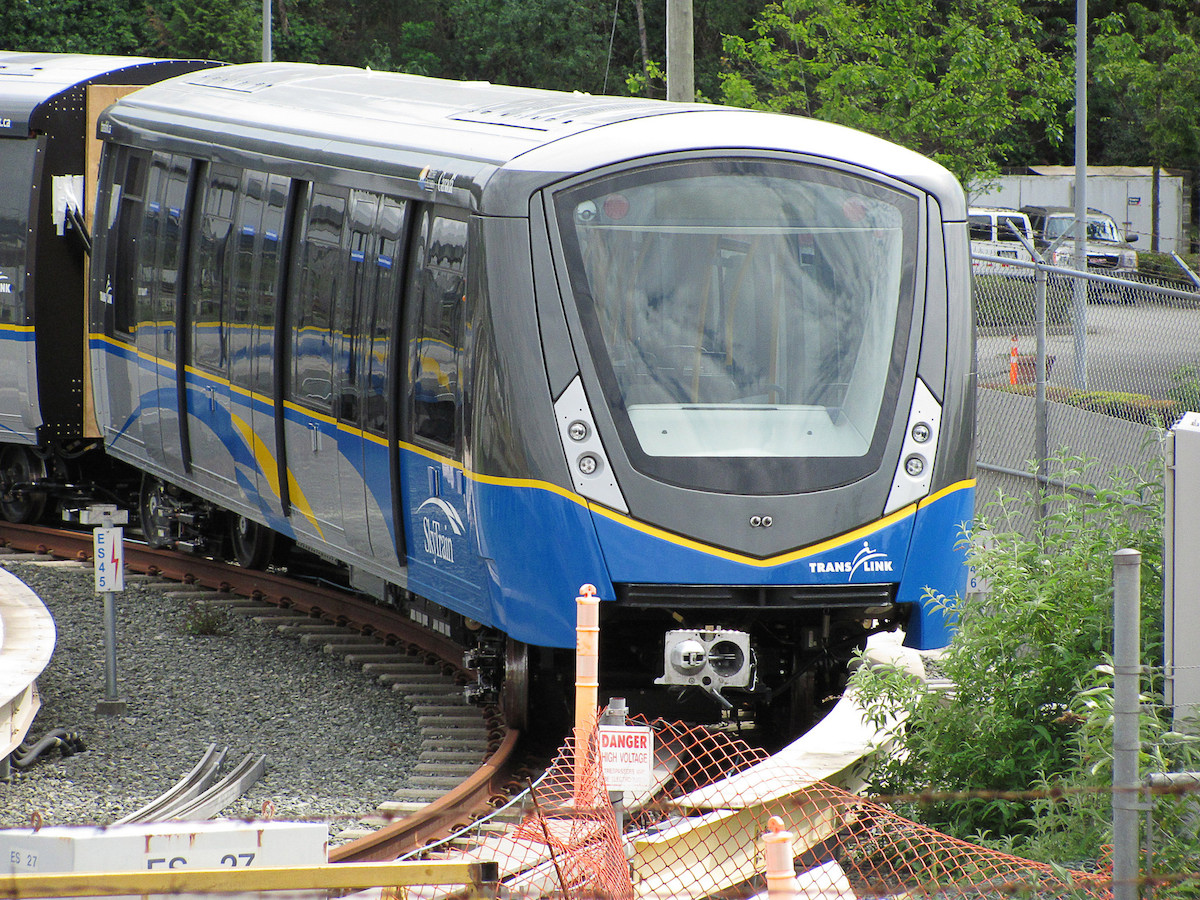