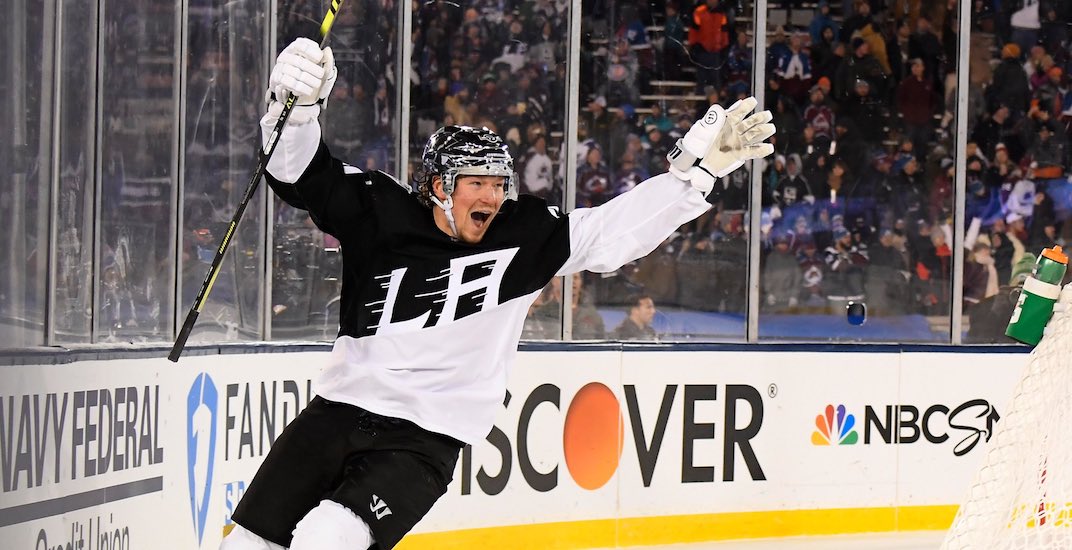 After surpassing expectations throughout most of the season, the Vancouver Canucks have now pushed all of their chips into the pot.

Jim Benning dropped his trade deadline poker face and swung a deal to acquire Tyler Toffoli from the Los Angeles Kings on Monday afternoon, one week before the trade deadline.

The 27-year-old veteran of 515 NHL games now joins a team firmly entrenched in a playoff race. Not only that, but he’s likely to reunite on the same line as his former teammate and friend, Tanner Pearson.

Find out more about the Canucks newest addition by reading up on these eight facts below.

1. Tanner Pearson was one of his groomsmen

It’s pretty common knowledge that Pearson, Toffoli, and Jeff Carter formed “That 70s line,” in the 2014 playoffs since all of them have numbers in the ’70s.

However, Pearson and Toffoli weren’t just linemates. Pearson was also a groomsman at Toffoli’s wedding, along with other NHLers like Jack Campbell, Milan Lucic, and Alec Martinez.

Toffoli married Cat Belanger in June of 2018 in Hawaii. His wife works in media, as an entertainment coordinator for the Los Angeles Dodgers.

2. First to score hat trick in an outdoor game

Talk about raising your trade value.

Toffoli made history in his last game as a King, scoring three goals to lead LA to victory in their outdoor game against the Colorado Avalanche. Hours before he was traded, Toffoli was named the NHL’s Third Star of the Week.

The Canucks now hope Toffoli has another hat trick in the bag, perhaps when he faces his former team at the Staples Center on Saturday, March 21.

A hat trick in the playoffs would be even sweeter.

3. He has scored more against Canucks than any other NHL team

Many players are dubbed as “Canuck killers,” but did you have Toffoli on that list?

The newly-acquired winger has 13 goals against Vancouver in 28 career games. He hasn’t hit double digits in goals against any other team.

4. One of the best from his draft class

Toffoli has enjoyed a distinguished NHL career thus far. He has a Stanley Cup on his resume and he hit 500 NHL games earlier this season.

As a player who was expected to go high in the 2010 NHL Draft as the 16th ranked North American skater, Toffoli dropped to the second round.

He should have been drafted higher. His 290 points ranks 12th among players from that draft, and his 139 goals ranks 10th.

Toffoli was selected seventh overall by the Ottawa 67’s in the 2008 OHL Draft, and spent four seasons with the organization.

His third season with the 67’s was his most prolific. After being drafted by the Kings, Toffoli tore apart the league during the 2010-11 season. He finished tied for first overall in points as an 18-year-old.

He returned for one more season in 2011-12, and although he wasn’t as prolific offensively with 100 points, he did lead the 67’s through three playoff rounds.

6. He was also drafted into the KHL

This is one of the more obscure facts on the list, especially since Toffoli admitted he was in the dark about his selection in the KHL Junior Draft.

“I had no clue about that,” Toffoli told the Ottawa Citizen. “My dad told me. I have no clue how that works, but obviously my dream is to play in the NHL.”

The KHL junior draft began in 2009. Anyone who’s between the ages of 17, and not older than 21, can be drafted as long as they don’t have a contract in a Russian hockey league.

Toffoli was selected in the seventh round, 169th overall by Traktor Chelyabinsk on June 4, 2010. He was one of only two Canadians chosen. Suffice to say, his selection was a waste for the Russian squad, as the Kings selected him 47th overall later that month in the 2010 NHL Draft.

7. AHL Rookie of the Year

Toffoli made it pretty clear early in his AHL career that he was ready to graduate to hockey’s best league.

Joining the Manchester Monarchs full-time in 2012-13 as a 20-year-old, he scored 28 goals and posted 51 points in 58 games in his rookie year. He was later awarded the Dudley (Red) Garrett Memorial Award as the AHL’s top rookie.

That eventually earned Toffoli an NHL call-up in March of that season, where he played in 10 regular season games and 12 playoff games for the Kings. It didn’t take long for Toffoli to score his first NHL goal, as he beat Mike Smith of the Phoenix Coyotes in his second-career game.

By the time 2013-14 rolled around, Toffoli became a full-time NHLer after registering 15 goals in 18 AHL games prior to being recalled.

His first season in the NHL was fairly successful as he posted 12 goals and 29 points in 62 games. However, it was the playoffs where Toffoli made his mark.

As you might remember, the Kings went down 3-0 to the San Jose Sharks in the first round, before the Kings came back to win the series 4-3.

Toffoli wasn’t getting big minutes in the first round, but he made his impact nonetheless. The Kings won 6-3 in Game Four, and 3-0 in Game Five. Toffoli had the game-winning goals in both contests.

He scored again in Game 7 as well, and his 3-1 insurance marker early in the third period was the dagger for San Jose.