The Western Canada Marine Response Corporation added a new oil spill vessel to their Vancouver fleet Tuesday afternoon. The boat was named after former employee George Penman and was christened in Burrard Inlet in a private ceremony.

The $4.5 million oil spill response vessel is 20 metres long and has a top speed of 26 knots. Getting oil out of the water after a spill needs to happen as quickly as possible, and WCMRC said this boat can deploy booms within minutes and has a skimming capacity of nearly 33 tonnes per hour.

“It can handle those unsheltered water conditions, which is a big plus for us.”

The vessel can accommodate five crew members for overnight stays, allowing it to operate continuously when situations become dire. It has a forward-looking infrared camera to detect oil during the night.

“It’ll be the most high-tech vessel on Canada’s West Coast, that’s for sure,” said Lowry. 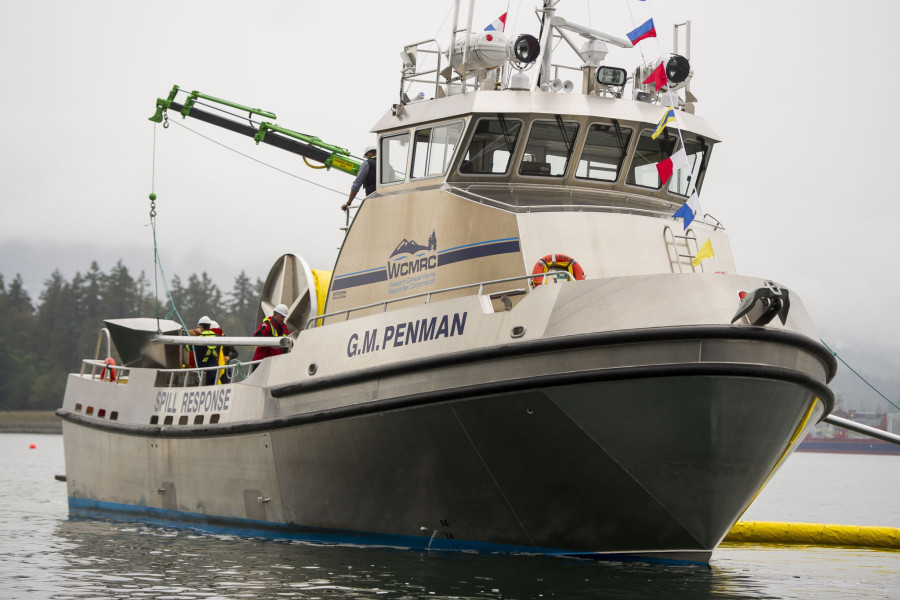 The G.M. Penman will be stationed at the Main Street dock downtown for the foreseeable future while sea trials are underway. The total number of oil response vessels in B.C. is now up to 32, roughly distributed between the Lower Mainland, Vancouver Island, and around Prince Rupert.

Lowry stresses the addition of this boat was in the works before the M.S. Marathassa oil spill in English Bay, and does not come as a result of it.

“We are constantly adding new vessels and new equipment. We already have significant assets within the Burrard Inlet to handle oil spills,” he said.

He added that they have a total of 12 vessels in the Burrard Inlet and three or four of them were used for that particular spill.