‘Never Built’ is a semi-monthly Vancity Buzz series highlighting major and impressive development projects and architectural designs that were canceled in the Metro Vancouver region. The in-depth series covers projects and designs throughout the region’s entire history.

The vast West Building of the Vancouver Convention Centre sits on downtown Vancouver’s Central Waterfront as one of the city’s most powerful architectural statements to urban, environmental and interior design.

This glass-enclosed space is topped off with a six-acre green roof, Canada’s largest of its kind in fact, and has a total floor area of 1.1 million square feet or four city blocks. It was completed at a cost of $883.2 million more than six years ago, making it the most expensive single building in Vancouver’s history.

The expansion tripled the amount of available space that could be used for meetings and exhibitions and provided the city with a large outdoor plaza space that was desperately lacking in the city. It created a new economic generator for tourism in the city; the influx in attendees, from events Vancouver would otherwise have not been able to host, created new spending and opportunities for the local economy.

The planning process for the convention centre expansion began in the mid-1990s, before the dream of bidding for the 2010 Olympic Winter Games was ignited. At the time, the exhibition and meeting room facilities of the ‘Vancouver Convention & Exhibition Centre’ were exclusively housed under the white sails of Canada Place and the lower floors of the Pan Pacific Hotel tower.

The former Canada Pavilion built for the Expo ’86 World’s Fair had served as cruise ship terminal, hotel and convention centre for almost a decade. Demand for bookable exhibition and meeting space was exceedingly high, there was already a growing need to build more space.

At least four sites and plans, involving different private sector proponents and stakeholders, across the downtown Vancouver peninsula were considered by the provincial government. Ultimately, the 11-acre Burrard Landing waterfront site to the west of Canada Place was chosen over the railyards site north of Waterfront Station and east of Canada Place as well as the Bing Thom Architects plan that involved the use of B.C. Place Stadium and adjacent sites that have since been developed into condominium towers.

The earliest design for the new facility at Burrard Landing featured a sleek, wavy-shaped white roof that matched the five white sails of Canada Place. This design was produced prior to the Port Metro Vancouver plan to build a right angle-shaped extension of the Canada Place pier (later completed in 2001) for longer berths to accommodate more and larger cruise ships.

Other elements of the first design included an extension of the seawall, large public spaces, a major civic plaza and the inclusion of a 2,000-seat performing arts centre (depicted on the far right of the rendering below).

Since the 1990s, the Burrard Landing site was pegged as the location for the City of Vancouver’s Coal Harbour Performing Arts Centre – a facility to complement the Orpheum, Queen Elizabeth Theatre and Playhouse – and it was thought that the performing arts centre could be incorporated into the convention centre project.

First design featuring a white roof to match the sails of Canada Place, with the Coal Harbour Performing Arts Centre depicted on the far right. 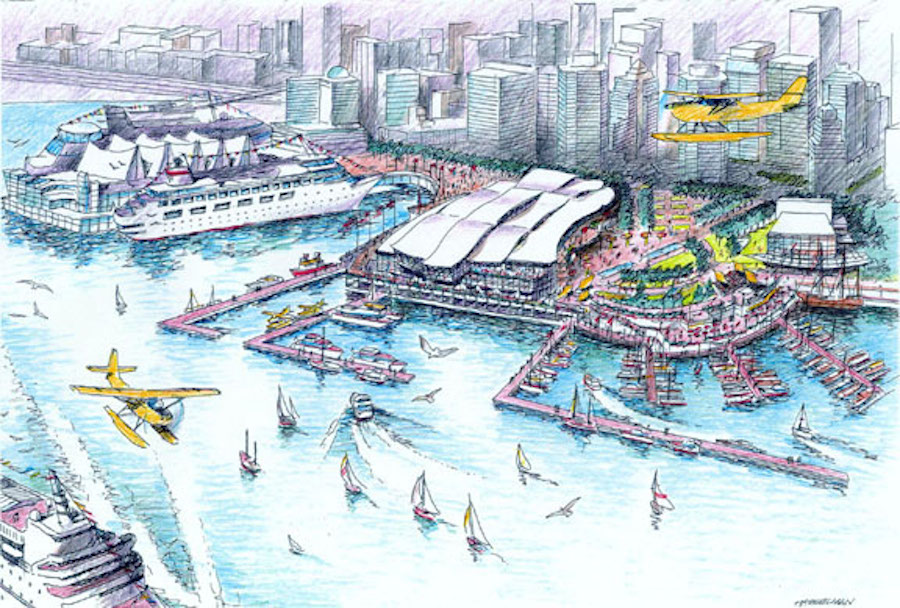 The design for the new facility took a major shift when the City of Vancouver’s planners indicated they did not want a design that could potentially ‘steal the thunder’ of the adjacent iconic sails of Canada Place.

This new direction was initiated in 2003 when Seattle-based LMN Architects, with the assistance of local firms DA Architects + Planners and Musson Cattell Mackey Partnership, was selected as the architectural firm for the project.

A streamlined ‘two-winged’ green roof with a gap through the centre was among the first green roof designs. There were also plans to make a portion of the roof publicly accessible as an extension of the city’s green space, but this was later eliminated to reduce costs. 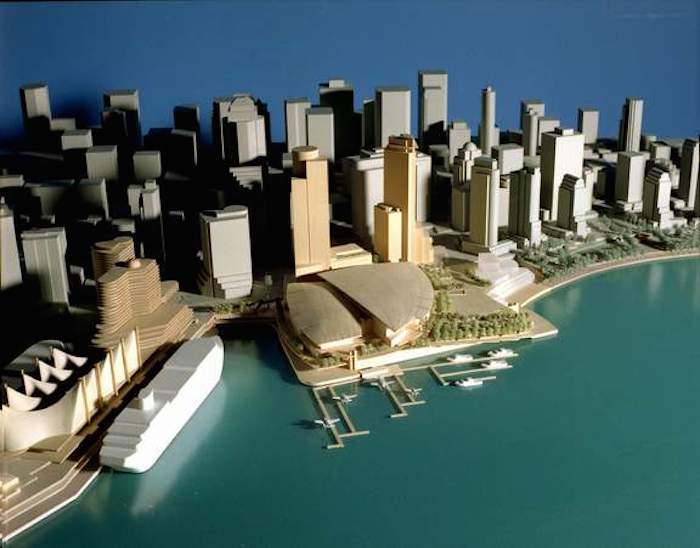 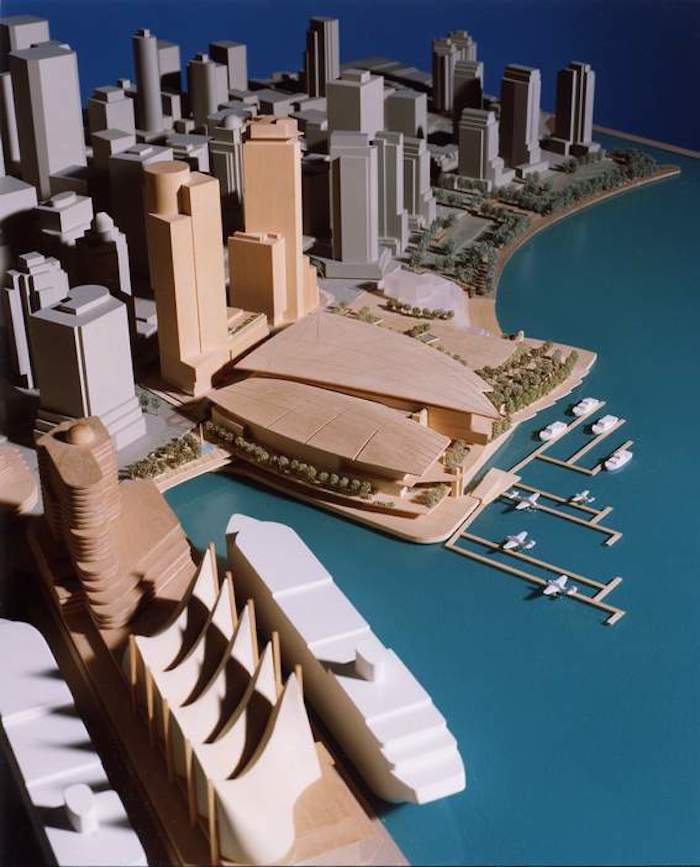 In 2004, the final design of the expansion building began to take shape. The green roof had now morphed into irregularly-shaped folding landforms to create a transitional ‘green space’ along the Coal Harbour waterfront. The form of the structure ‘cascades’ into Harbour Green Park and Stanley Park towards the west.

At this stage of the design process, the performing arts centre on the western edge of the development site was completely axed as another major budget trimming measure and to allow the exhibition hall and meeting facilities to occupy a larger footprint of the site.

Third design featuring the first iteration of the folding landform green roof. The performing arts centre on the western edge has been axed. 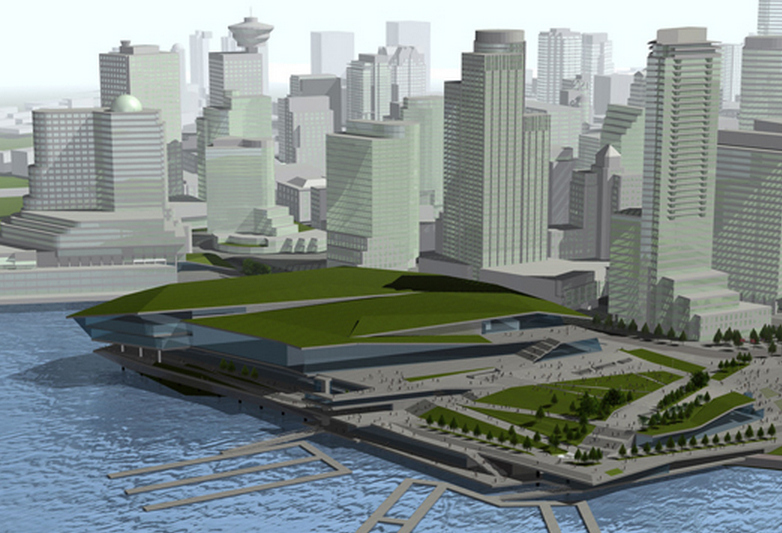 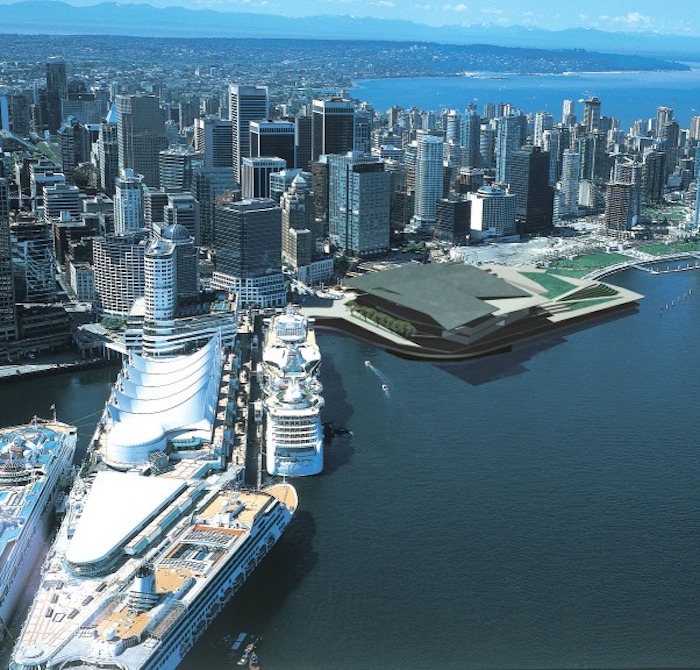 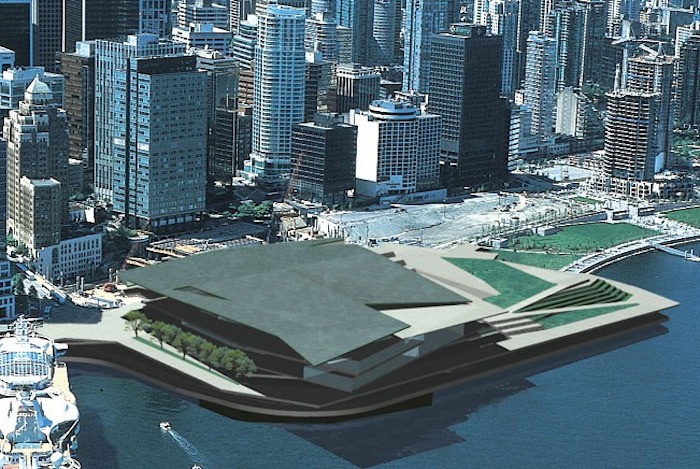 Drawing depicting the concept of a folding landform green roof that transitions into the adjacent park space. 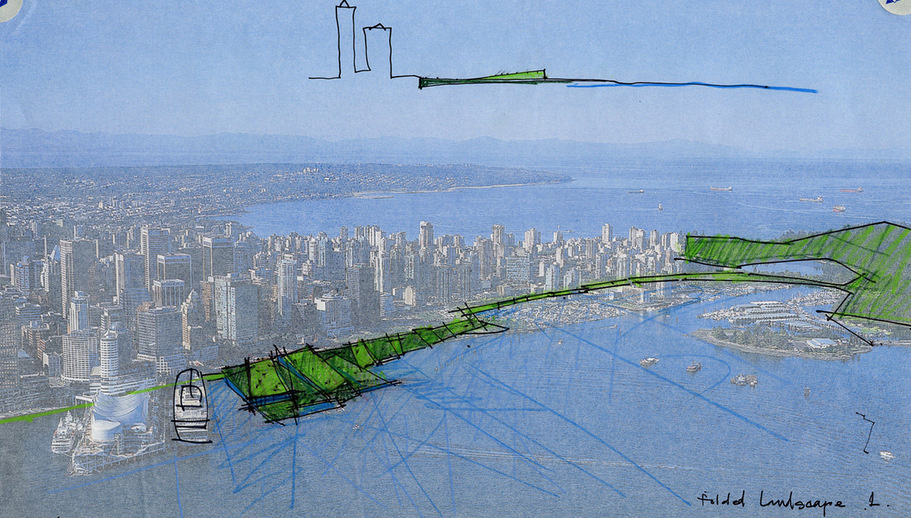 The folding landform green roof concept was further refined to create the fourth and final design. The provincial government had originally intended to move forward with the project using a public-private partnership (P3) model, which would have involved private sector involvement in the ownership, design, construction, financing, operation and maintenance of the public facility.

But attempts to reach an agreement with a proponent during negotiations that lasted almost a whole year were unsuccessful, forcing the government to abandon its P3 model and proceed with a more conventional approach with the private sector to design and build the project.

Construction finally began in November 2004, even though the design for the project had not been fully finalized, but this was necessary in order to meet the project’s new pre-Olympic deadline. A year had already been loss with the government’s failed P3 procurement process.

Local Olympic organizers initially did not deem the convention centre expansion an essential asset for hosting the media during the 2010 Games. Up until September 2004, over a year after the Games were awarded to Vancouver, VANOC had planned on building a temporary International Broadcast Centre (IBC) at Richmond using trailers at a cost of $15 million. As Canada Place’s convention facilities were slated to become the Main Press Centre (MPC), the relocation of the IBC to the new facility meant all media facilities could be located in one centralized area.

As the project progressed, so did the issues. The convention centre expansion’s construction cost overruns are well known, having begun with an initial budget of $565 million in 2004 and ballooning to its final ceiling of $883.2 million in 2007. A number of reasons led to this steep escalation.

According to a report by the Office of the Auditor General of British Columbia, the costs for basic construction materials such as steel, concrete and glass soared at more than twice the inflation rate forecasted due to an increase in global demand, particularly from China.

First of all, contractors experienced intense competition for skilled construction labour from the booming natural resource sectors in B.C. and Alberta, VANOC’s Olympic venue projects, and other major Olympic-related construction projects like the Canada Line and Sea-to-Sky Highway Improvement Project. Over the same period, Metro Vancouver’s residential construction activity was strong and sustained and other major commercial and non-Olympic institutional projects were underway feeding off from the same pool of human labour resources.

Secondly, the provincial government was unable to nail down a fixed-price contract with PCL Construction, the project contractor, until the summer of 2007. This meant the provincial government had to carry much of the burden of the overruns, with major contracts signed at much higher rates than anticipated. For example, the project began construction without a completed design; there were two different calculations in the materials costs for the portions of the building that had been designed and the portions that were still a design-in-progress.

And finally, the scope of the project kept changing, such as: $33 million added following a request from the City of Vancouver to revise the design to include more public amenities, a more prominent roof structure and incorporation of retail space to the exterior; $9 million for the building’s own on-site heating and air-conditioning systems; $20 million to foundation changes for the inclusion of a marine habitat skirt; and an additional $20 million for the renovations to the Canada Place convention centre facilities and construction of the direct indoor connector. Technical problems arose at several occasions, including issues with pile driving which led to $12 million in extra costs.

Sixty per cent of the project was built over land acquired by the provincial government and the remaining 40 per cent was over water. Nearly one thousand steel pilings were drilled across the entire development footprint to build a concrete platform for building the new facility.

One final component to the convention centre expansion has yet to be built: a marina in front of the seawall, immediately east of the new floatplane terminal. The concrete foundations for the marina’s piers are already complete.

Aerial photo of the fourth and final completed design of the Vancouver Convention Centre expansion. The two concrete stubs jutting out of the seawall, immediately north of the building, are the foundations for the future marina. 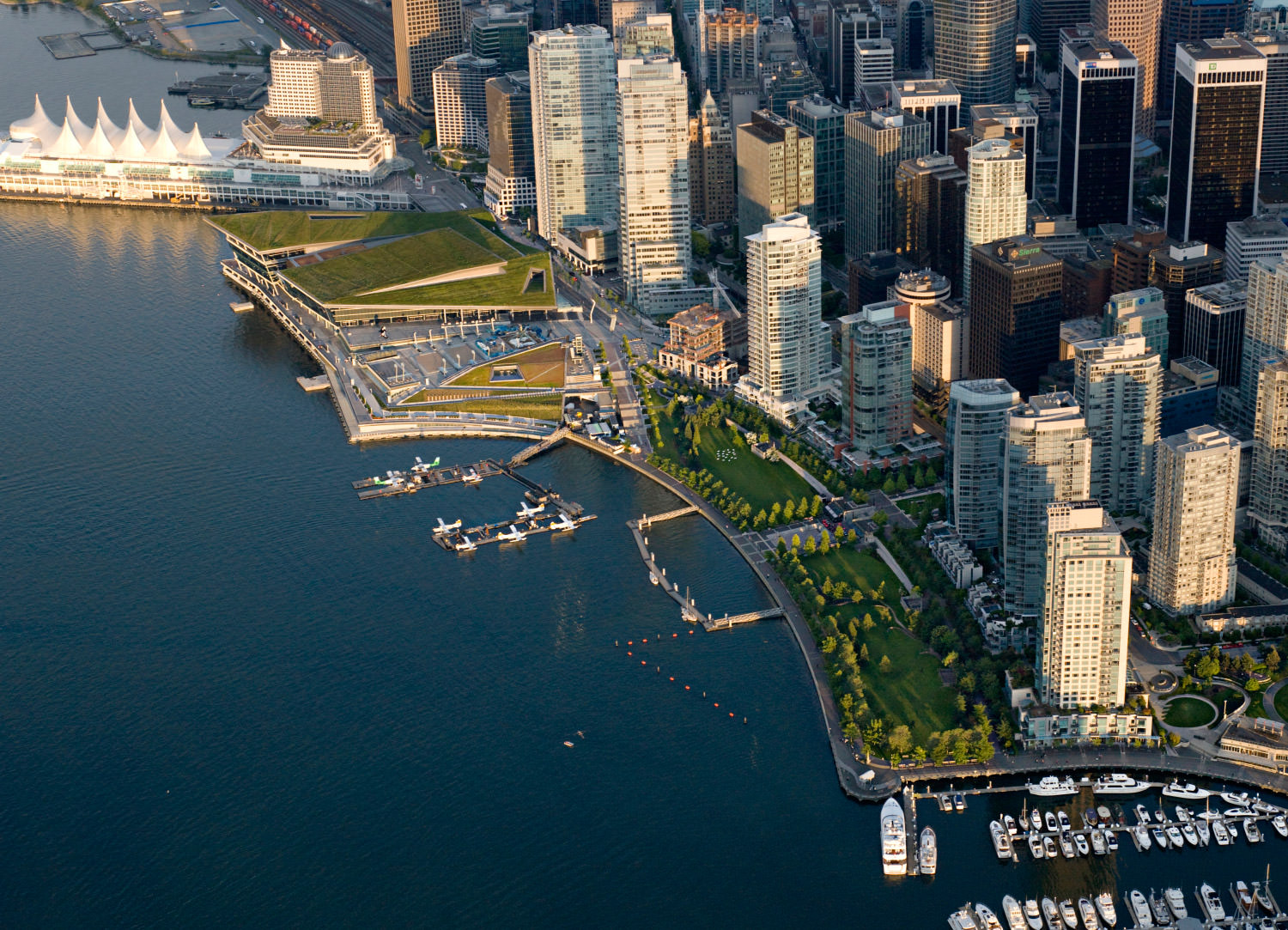 Two drawings that show cross-sections of the convention centre building and its marine edge. 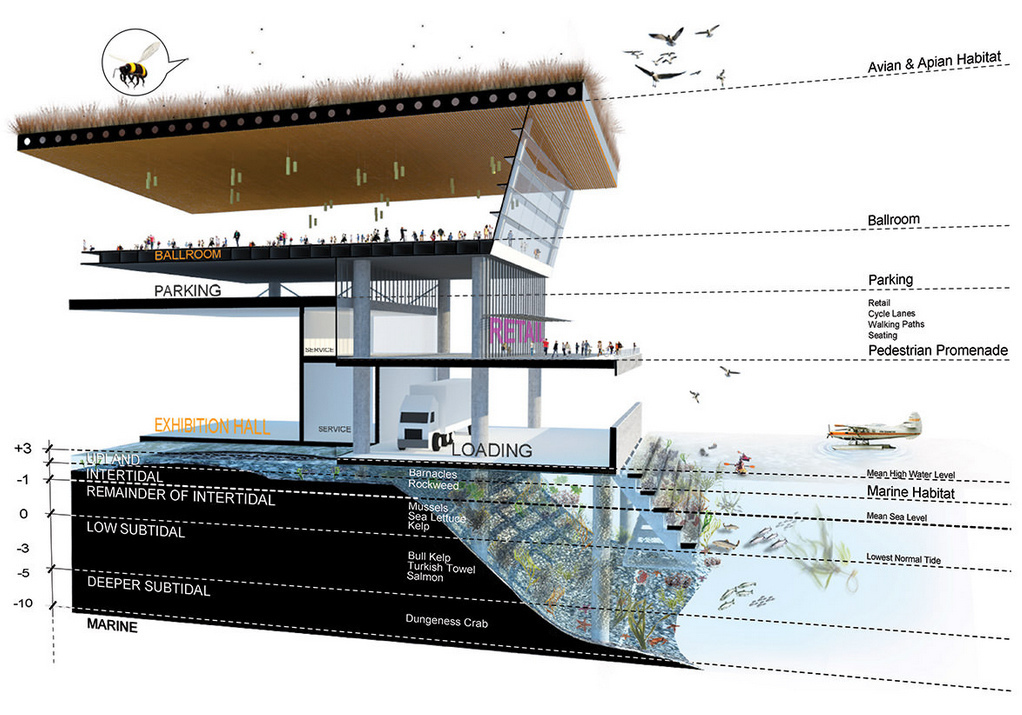 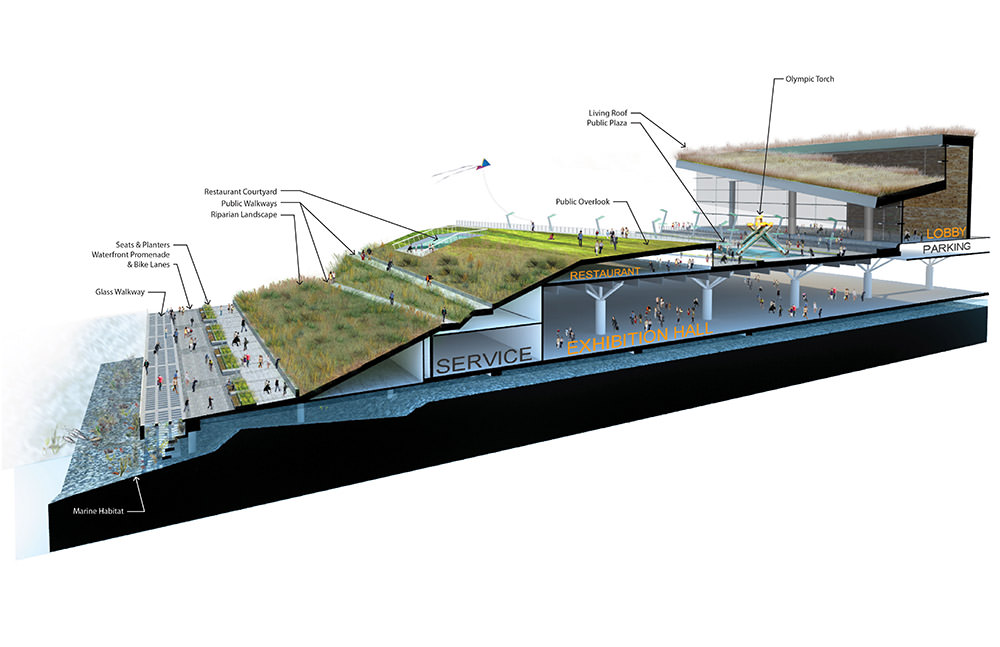 Drawing that shows how much of the convention centre is built over water on pilings. 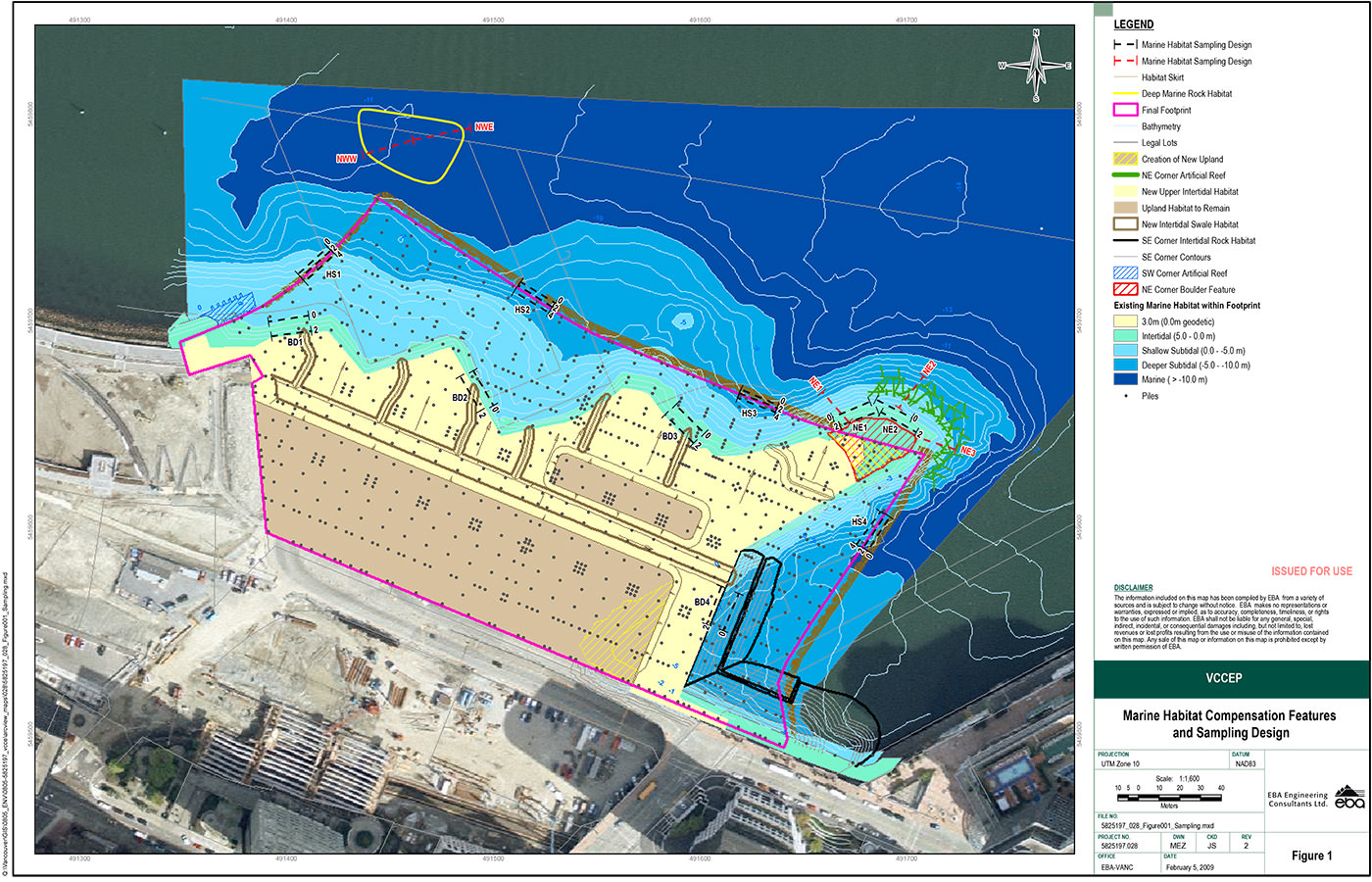