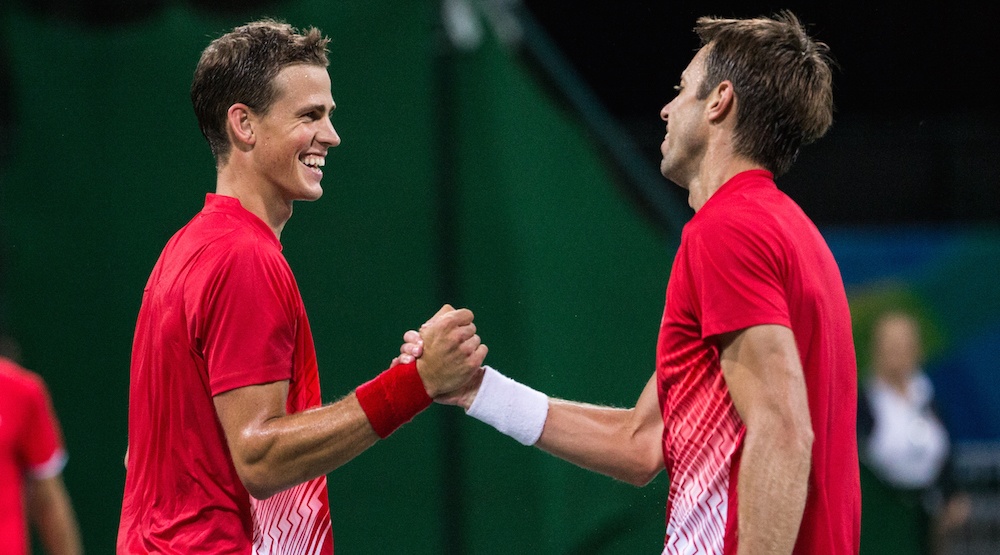 Vasek Pospisil and Daniel Nestor have lost in the semi-finals in men’s doubles tennis at the Olympic tennis tournament. The #6 seed team of Rafael Nadal and Marc Lopez defeated the #7 seeds from Canada 7-6, 7-6 in a hard fought two-set match that required a pair of tiebreakers.

Canada got off to a great start, breaking Lopez’s serve to go up 3-1 in the first set.

The fifth game of the first set is where the game took a turn.

With the game tied at deuce, Spain hit a shot that appeared to be wide, but was called in. Nestor was incredulous at the call, as a visible ball mark appeared to show the ball landed out.

This game was not played on one of the big courts in Rio, and thus video replay technology was unavailable. That point probably cost Canada the game, as Nestor and Pospisil won the very next point, yet Spain ended up taking the game.

The game could have cost Canada the set as well, as the first set needed a tiebreaker. Spain dominated the tiebreak, going up 6-0 and eventually winning 7-1.

Both teams held serve throughout the second set, including the tenth game where Canada fended off two match points to even the set at 5-5.

Tied at 5-5, Canada had their best chance to break serve, but were unable to convert on three break points with Nadal serving.

Down 6-5, Canada needed to fight off Nadal and Lopez, as well as the chair umpire to force a tiebreaker.

#CAN Daniel Nestor pleads his case on a controversial point against #ESP in #Tennis https://t.co/xT4N2uPAst https://t.co/bcUWPU3EST

Force a tiebreaker is exactly what they did, but once again Nadal and Lopez won it. This time they were helped by serving inadequacy, as Canada double faulted three times and Spain won 7-4.

#CAN Daniel Nestor was not happy after the loss to #ESP in the doubles semifinals. Hear what he had to say https://t.co/Pdx0qrNaYY

Unlike other tennis tournaments, Nestor and Pospisil’s tournament isn’t over yet. They’ll play for a bronze medal on Friday against against Americans Jack Sock and Steve Johnson.

Sock and Pospisil know each other very well, as they are normally doubles partners.

#TBT -16 years after her his Olympic gold in Sydney, #NestorForever has another shot at the top of the podium. pic.twitter.com/gL82Vo9N4J

The 43-year-old Nestor has played in a medal game before, of course. He won gold at Sydney 2000 with partner Sebastien Lareau.