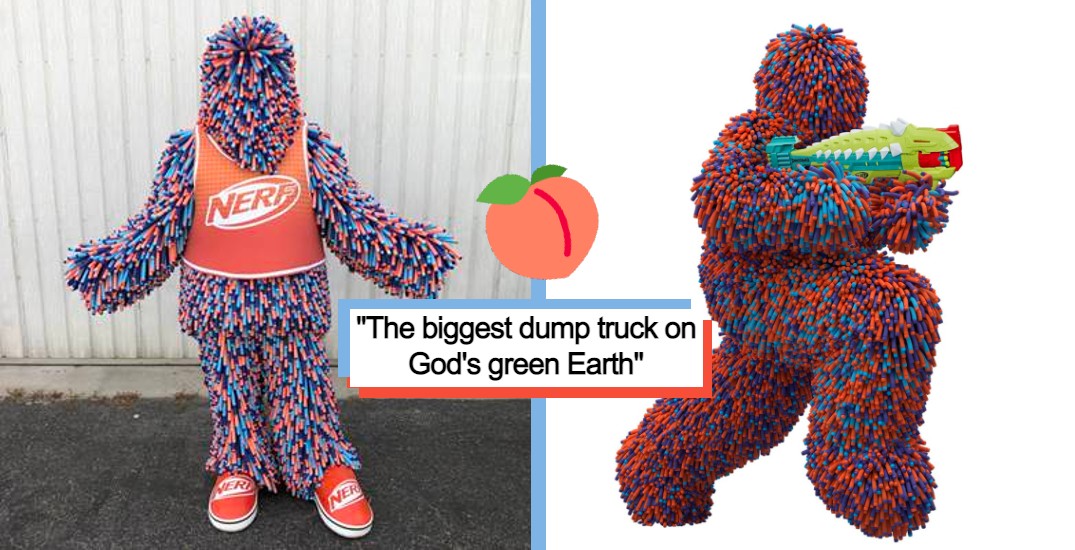 The toy company behind super soakers and foam shooters, NERF has introduced the world to its first-ever mascot, Murph — a non-binary, curvy, faceless figure made entirely of foam darts, carrying a big toy gun.

Murph uses they/them pronouns and the internet is in a love-hate relationship with them within days of their unveiling.

Netizens are reacting to Murph’s looks, personality, and “terrifying” catchphrase — “Unleash the play in you.”

Hasbro has just introduced, and this is not a joke, their new nightmarish mascot for NERF brand products named “Murph.”

Murph’s terrifying catchphrase is “unleash the play in you.”

The mascot, who looks like a cross between a sea anemone and the inside of a small intestine in a NERF tank top, is making a lot of people uncomfortable, but they’re into them regardless.

Artist Rob Sheridan called Murph a “floppy affront to God” and “a f*ckin nightmare,” but admitted to loving them.

NERF has introduced their new mascot, “Murph,” a big weird featureless terrifying gun-toting bigfoot thing made of foam darts who yearns to “unleash the play in you.” Murph is a fuckin nightmare and I love him, thank you NERF Brand for this floppy affront to God. https://t.co/CehbV4lZry pic.twitter.com/XYjOKykkNu

They may look like a sleep paralysis demon, but they’re also being hailed as a radical non-binary icon.

Murph from Nerf is rad as hell. pic.twitter.com/Oc1118VjDJ

“I am being 100% sincere when I say this is the first instance of non-binary representation in commercial advertising that actually feels like it could have been devised by a trans person,” said Cole Watson, a non-binary musician from Philadelphia. “This design f*cking rules,” they added.

Murph uses they/them pronouns. I am being 100% sincere when I say this is the first instance of non-binary representation in commercial advertising that actually feels like it could have been devised by a trans person. This design fucking rules. https://t.co/7Iq413lH7v

And it seems that depending on how you look at Murph, they’re carrying a weapon other than the gun you see in their hands — their gigantic, BBL-era booty, which one  Twitter user eloquently and aptly calls “the biggest dump truck on God’s green Earth.”

You could also see it as their leg, if you’re boring.

so now Nerf has a mascot named Murph, and depending on how you look at the picture he’s either running or is throwing back the biggest dump truck on God’s green Earth pic.twitter.com/fGTXkM3B6P

There are also some photos of Murph shirtless.

Here is another picture of Murph, the new NERF mascot, now completely naked and brandishing a gun: pic.twitter.com/bSH8n9nE6G

People are talking about all the things Murph reminds them of, one of which is that huge, colourful rolling brush you see at car washes.

Yooooo, it’s so crazy seeing Murph becoming the official mascot of NERF. I still remember when we both worked at the car wash in high school. Proud of you dude. 👏 pic.twitter.com/j2HTEJPzAz

And Murph’s already being compared to Gritty, the official mascot for the Philadelphia Flyers who may or may not have punched a 13-year-old boy in 2020.

Nerf just unveiled their new mascot “Murph”. He is made entirely of nerf darts. He is bizarre. But now we have to know, who’s weirder? Murph or Gritty? – JH pic.twitter.com/s0j5ZGCAMH

Can’t wait to see this battle.
Murph the Nerf vs Gritty pic.twitter.com/GIRvBstqLd

“He is made entirely of nerf darts. He is bizarre,” tweeted Star FM Brandon. “But now we have to know, who’s weirder? Murph or Gritty?”

Can’t believe comparative beauty standards are coming after mascots now, but hey, that’s 2022 for you.