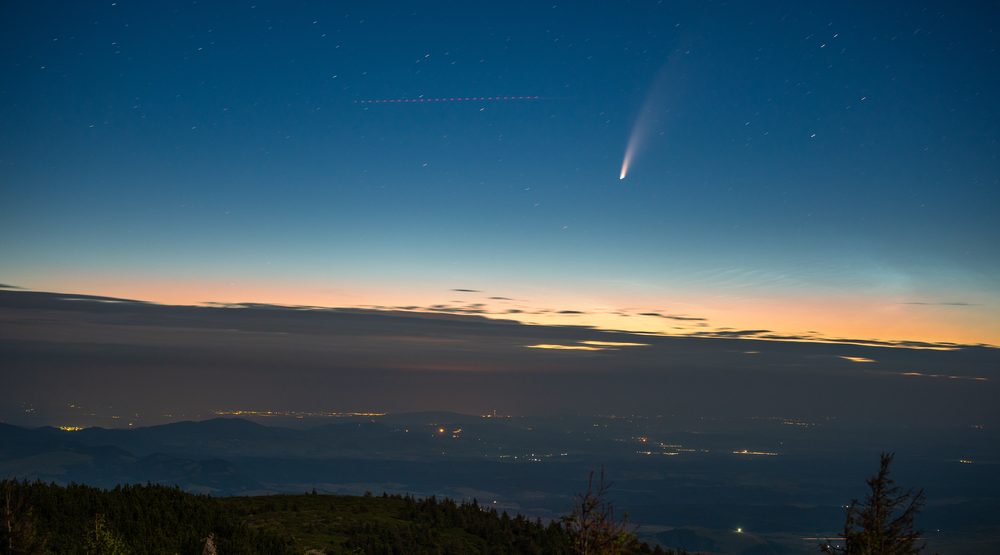 Those hoping to escape the confines of earth for an evening may want to take a look at the stars tonight, as the NEOWISE comet will be travelling overhead for the coming weeks.

Comet C/2020 F3, or NEOWISE, has been lighting up night skies around the planet for days now, and if you didn’t take your chance to see it, don’t fret your little cotton space socks about it, as you have the chance to see it for yourself tonight and for the next two weeks.

“A wonderful binocular comet has been gracing our early morning skies, and now it’s becoming visible in the evening as well, for observers at northerly latitudes such as those in the northern US and Canada,” the celestial trackers at EarthSky write. “Some skilled observers have reported that – once you spot it with binoculars – you can remove them and glimpse this comet as a fuzzy ball, using only the unaided eye. Using binoculars or other optical aid is a must, though, if you want to see this comet’s splendid split tail.”

According to NASA, that tail is 5 km long, so it might be surprising that it’s not visible to the unaided eye, but considering the closest it will get is 10 million km from earth, it’s impressive we can see anything at all.

Comet NEOWISE will reach the closest point to earth on July 22 to 23, a time when the views will get even more spectacular.

“If the comet remains at its current brightness, it might be even easier to spot in the evening during the second half of July than it has been in the morning sky so far. The comet will be gradually higher each night, just below the Big Dipper,” EarthSky said.

The name NEOWISE, interestingly enough, comes from the satellite observatory that found it, the Near-Earth Object Wide-field Infrared Survey Explorer. A device that works by imaging the entire night sky, as opposed to just a section of it.