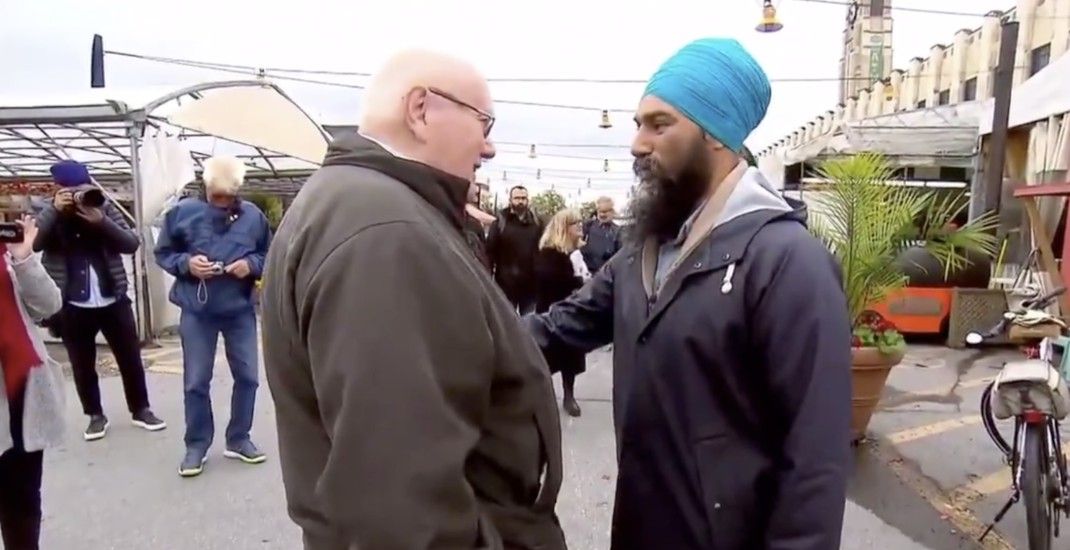 NDP Leader Jagmeet Singh was approached by a man who told him to “cut off” his turban in Montreal today.

The incident occurred while Singh was campaigning at Montreal’s Atwater Market on Wednesday morning.

He stopped to briefly meet with a man walking in the market. They shook hands and the man proceeded to lean in and tell Singh that he should “cut off” his turban. The exchange was caught on camera by CBC News.

VIDEO of NDP leader Jagmeet Singh being confronted at Montreal’s Atwater Market by someone who advised him that he should remove his turban. #cdnpoli #polqc pic.twitter.com/iNFQ4QGlmW

“You know what? You should cut your turban off … You’ll look like a Canadian,” the man told Singh.

“Oh, I think Canadians look like all sorts of people,” said Singh. “That’s the beauty of Canada.”

“In Rome, you do as the Romans do,” the man replied.

“Eh, but this is Canada. You can do whatever you like,” Singh said to the man, before walking away with his wife, Gurkiran Kaur.

Singh wears a turban — also known as a dastar — as part of his Sikh faith. In Sikhism, turbans represent courage, honour, and spirituality. Men and women who are baptized Sikhs are required to wear a turban as a testament to their faith. Turbans cannot be simply  “cut off” or removed as the man suggests because they hold great importance to those who practice the Sikh faith.

Many took to social media to express their dismay with the man’s comment to Singh.

On Twitter, Liberal Party candidate and National Defense Minister Harjit Sajjan said “comments like these have no place in today’s society. All Canadians need to come together to strengthen our multiculturalism.”

Turban or yarmulke, cross or crescent. No matter your religion, ethnicity, or cultural background, we are all Canadians. Comments like these have no place in today’s society. All Canadians need to come together to strengthen our multiculturalism. #DiversityIsOurStrength https://t.co/iSHeTYJjxC

Others commended Singh for being a “class act” and handling the racist altercation with “grace.”

Mr. Singh shows a great deal more patience with this man than I would have shown for someone who asked me to remove my Kipa. Kudos to him for that. https://t.co/eLzcakqACr

Religious discrimination is not welcome in Canada. Mr.Singh handled this difficult situation with grace and patience.

Reminds of :
“I am a Canadian, free to speak without fear, free to worship in my own way, free to stand for what I think right…” – John G. Diefenbaker https://t.co/VR9ZjcrpPc

Mr. Singh is truly a class act for having to constantly endure this with a smile.

It’s a shame that people like this exist in a country that’s great in so many ways. Regardless of one’s politics, this kind of thinking should be firmly and wholeheartedly denounced. https://t.co/ciLhf50WOr

This just sucks. No idea how old this man is being so ignorant to Mr. @theJagmeetSingh but it shows how far we still have to go. It’s heartbreaking he or anyone else had to endure that. And Mr. Singh is always so noble and gracious when he does. It’s not fair.

Do I ever know that lean-in move. Whenever I see it coming I just know it ends with a comment like this.

Mr. Singh handles it well, but we are conditioned to handle it like this, because to do otherwise is to risk further harm.

Mr. Singh. I may not vote for you, I may not agree with you parties platforms or even like the colour of the NDP signs. I do however think I’d like to apologize to you for this bigotry on behalf of every like minded Canadian. You might not have my vote, but you have my respect

Trying to whisper something like this when Mr Singh is mic’ed up is pretty shameful. And he went out of his way to say hello and that’s what he gets? Ugh….. https://t.co/RC9EIxDVoE

The way @theJagmeetSingh takes this garbage is quite admirable. #cdnpoli https://t.co/VLyvWJFZ8d

While other party leaders talk to voters about their plans and policies, Jagmeet Singh has to literally defend his Canadianness. Tell us again that race doesn’t matter in politics #cdnpoli https://t.co/to82XkhqeE

When @theJagmeetSingh talks about love & courage it’s not a motto – it’s how he lives his life.

He has faced racism since he was young & he’s always responded courageously by condemning hate & with love by embracing his identity.

A lesson for us all 🙏🏾 https://t.co/qMFBKoPWJX

It’s anticipated that Bill 21 — Quebec’s religious symbol ban — will come up as a topic of discussion during the debate.

In June, the Quebec government adopted legislation that bans workers in the public sector from wearing religious symbols (such as kippas, hijabs, and turbans) in the workplace.

“I’m hoping that by being in Quebec, and saying ‘Hey listen, I got a turban and a beard’ and I’m out here talking about loving the language, fighting against climate crisis, investing in people, and investing in universal medication for all, the people can see, you know what, maybe it’s not a good idea to have divisive laws that discriminate people based on the way they look. Maybe we should focus on how to build a better society together,” he said.

In Montreal at his only campaign event before tonight’s leaders’ debate, NDP Leader Jagmeet Singh is asked about Quebec’s secularism bill 21; he says it’s important to challenge it but he doesn’t want to politically interfere with existing court challenge #cdnpoli #elxn43 pic.twitter.com/jbllhdIYUi

Singh added he would not interfere with a current court challenge of Bill 21.

“I don’t want to politically interfere with that,” he said. “I think it’s very important that [the] court challenge go head. I support the right to have that court challenge, and I don’t want in any way to jeopardize its success or its outcome by interfering.”