A growing number of British Columbians would vote for Thomas Mulcair’s NDP if the federal election were held today.

A new poll conducted by Insights West reveals the NDP have built a lead of 41 per cent amongst decided voters in British Columbia. Trailing behind is Justin Trudeau’s Liberals at 24 per cent, followed closely by Prime Minister Stephen Harper’s Conservatives at 22 per cent and Elizabeth May’s Green Party at 12 per cent.

Compared to a previous poll conducted in May, today’s numbers represents a six point jump for the NDP, one point drop for the Liberals, seven point fall for the reigning Conservatives, and two point gain for the Greens.

With these strong numbers, under Canada’s first-past-the-post electoral system, the NDP could possibly win a majority of B.C.’s 42 seats in the next Parliament.

When it came to the question of who would make the best Prime Minister, respondents shared similar sentiments. Mulcair topped the pack with 27 per cent (5 point gain), followed by Trudeau at 20 per cent (1 point gain), Harper at 19 per cent (8 point drop) and May at 9 per cent (3 point gain).

“One of the big problems for the Conservative Party is the fact that three-in-ten of their own voters from 2011 are already looking elsewhere,” said Insights West spokesperson Mario Canseco in a statement.

“In addition, both the approval rating and the momentum score for the Conservative leader are significantly lower than what is observed with his rivals.”

It should be noted that the results could greatly change as the election is still two months away. As well, the Insights West poll results are based on the views of decided voters; 21 per cent of respondents said they were undecided on who they would vote for.

With the issues at hand, Mulcair is seen as the best candidate in B.C. to tackle housing, poverty, homelessness, the economy, healthcare, government accountability, surveillance and Bill C-51, and veterans. Harper only leads in two areas, in foreign affairs and crime and public safety, while May is seen as the best option for the environment.

However, British Columbians have no clear favourite for who would be best to address the highly controversial issue of energy and pipelines. 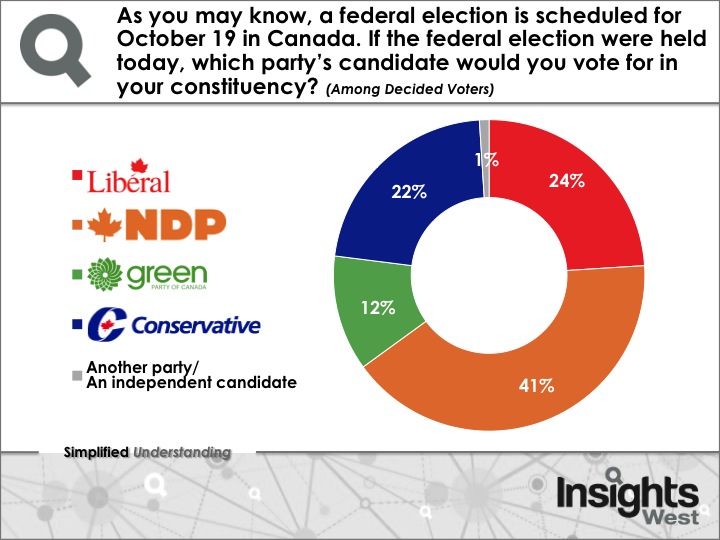