That was the longest 60 minutes I’ve had to sit through.

Let’s start with the premise of Native Girl Syndrome, which easily made it stand out among the shows of this year’s Dancing on the Edge Festival:

NGS (“Native Girl Syndrome”) is inspired by the experience of Kramer’s own grandmother, having migrated from a remote First Nations community into an unfamiliar urban environment as a young woman. The piece explores the effects of cultural disorientation, assimilation, and the self-destructive behavior she endured. It creates a voice and draws awareness to larger issues surrounding the marginalization and victimization of Indigenous women. 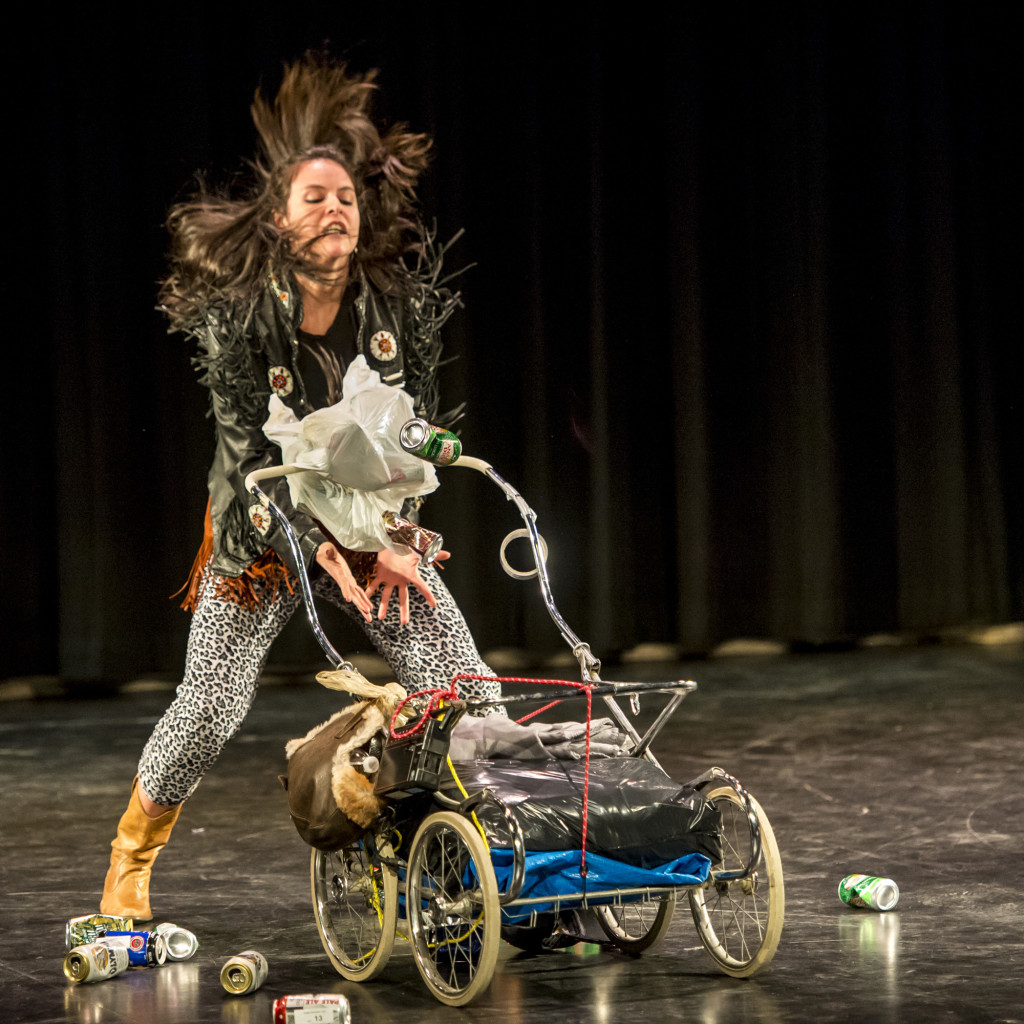 The visual imagery, if nothing else, can be stunning. Trash never looked so good and so bad. There were some parts where the two women were able to show us glimpses of their character and what made them tick, of the unrelenting classism and racism that make up their lives, day in and day out.

The minute movements in depicting their daily struggles; the slow, arduous process of simple tasks under the haze of drugs and alcohol; the absolute tedium of long hours and daily rituals… these were the fragments that I liked the best. And unfortunately, it wasn’t enough to counter for everything else.

Everything I’m going to write below might have been exactly in line with Kramer’s intention for the piece. I also feel the argument of artistic intention is one artists that tend to hide behind to ‘justifying their work’. Ultimately, the piece needs to be approachable and digestible to the audience – and this one was not.

The show was nothing at all like the pacing in this video. At all.

For all of its jerky movements and allusions of danger, NGS was really, really slow. This may have mirror the dullness of everyday life, but it was also very hard to elicit any emotion towards the characters. As I mentioned in the top of this article, I’ve never had such a short show drag on for what seemed like forever. It’s usually an indication of pacing – glacial and disjointed, in this case.

The minutes also dragged on because the music, at times, was deafening. I found myself plugging my ears (literally) during the musical ‘climaxes’. Given that we’re at the intimate stage of the Firehall Arts Centre, sound levels should have been checked well in advance.

Finally, there was a weird juxtaposition in watching lithe, lean, healthy bodies act out these narratives. I couldn’t suspend my disbelief when dancer Karina Iraola proclaims that she has 10 children, or when Angie Cheng chugs suspicious blue liquid like an old hand. Both women come to stages of undress throughout the show, and then it was even harder to equate toned, dancers’ bodies to the hardships existing right outside the confines of the theatre.

While the steps and slang were technically correct, Native Girl Syndrome felt more like a first world appropriation of “the streets” rather than breaking new ground.

It’s a disappointment that such a great opportunity for Vancouverites to understand the struggles of DTES women would instead, further the feelings of “us vs them”.

I come out of this piece with no greater understanding than I entered, and that’s the greatest sadness of all.