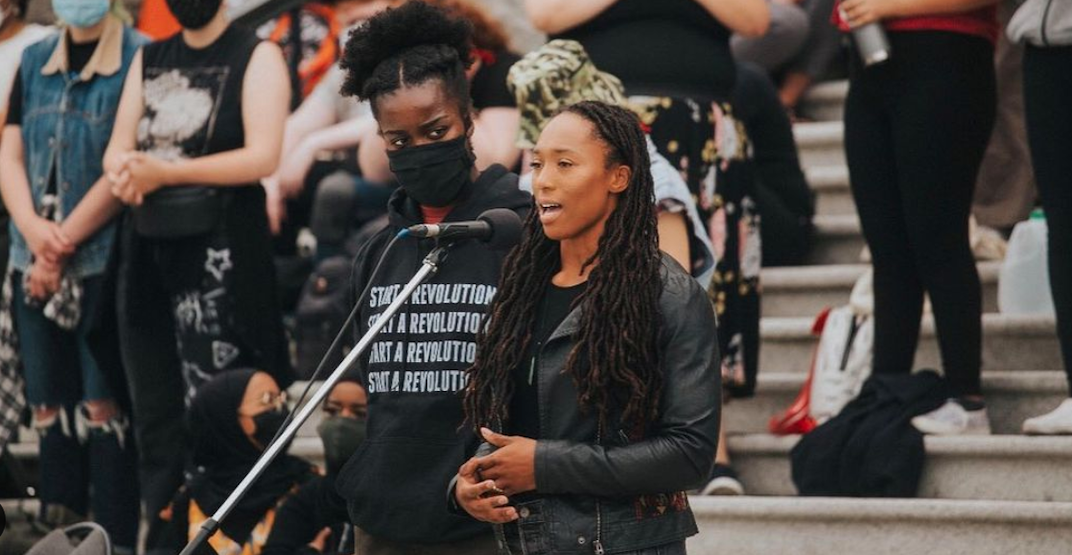 When the Olympics were cancelled due to the COVID-19 pandemic, Canadian National Women’s Rugby players Charity Williams and Pamphinette (Pam) Buisa saw a chance to refocus their attention and commitment to the causes closest to them.

At a time when conversations about social justice, police brutality, inequality, and white supremacy were at their highest following the death of George Floyd, Buisa and Williams say they had been grappling with their position as athletes representing the country and how they use their platforms.

“For myself it’s been a lot of figuring out what I can do in my position. I love rugby, I love my teammates, but I also know that it’s more than just rugby,” Buisa says in an interview with Daily Hive.

“There’s a tremendous amount of realizations that came to mind when this whole pandemic happened. Things like being exposed to different communities, people who use substances, people who are in and out of the incarceration system, people who are oftentimes consistently suppressed in their expression of their voices.”

Williams says that as athletes representing Canada, they take immense pride in their positions, but they are also coming to terms with the different identities they embody.

“In this past year I’ve really started to solidify who I was and how I saw myself in this country, the privileges that I have and the things that so many Canadians don’t receive being in Canada, like many Indigenous reserves and communities still don’t have access to clean drinking water and living necessities,” says Williams.

“It’s been hard to connect the two, and now I feel like I move through this world in more of an activist light instead of a Canadian rugby player light. It’s so much embedded into who I am. Other than being a rugby player, I’m also a Black woman in Canada, and that is also who I am, so I’m just trying to figure out that identity, and I don’t really have all the answers.”

Buisa and Williams are more than just athletes, and they are calling attention to the issues they care about.

Williams explains that beyond the field she has learned to use her voice and call out injustices.

“It’s been a lot of realizing that I have a lot of agency, and with that agency I need to use it to power myself and to learn from others,” she says.

Williams says she has received backlash from fans and people on social media who “see [her] as a rugby player only,” erasing her identity as a Black woman “trying to advocate for myself and for millions and millions of other people.”

When the Olympics were cancelled, both Buisa and Williams began to pour their energy into their own communities, advocating for causes they care about and are closest to.

“Because of COVID and because everything was postponed and put on hold, we were able to fully understand the gravity of what was happening – and not just us but the entire world – and that’s what sparked this resurgence of a movement, but since then there’s been a lot of work that we’ve done in the community.”

With the support of Rugby Canada and the creation of an internal BIPOC Working Group, they continue to advocate for change and conversation. Both in and outside of the sport, Buisa and Williams began to mobilize locally in their communities.

Buisa helped put on two rallies in Victoria to “fight against injustice for Black and brown people,” and created a mutual aid fund for those who were disproportionately impacted by COVID-19, and Williams helped put together a mural in Victoria that brought together over 17 local BIPOC artists.

“I work at a hotel, the Howard Johnson hotel that became a transition home for a lot of people that were formerly unhoused, and the biggest lesson that I learned was that we need to be able to humanize someone’s humanity and not emphasize their condition,” says Buisa.

“There’s a structural fracture that prevents people from actually trying to respond to the root of the issue and can only respond to the systematic symptoms of what’s happening.”

In addition to their work in and outside of rugby, the pair also delivered workshops around the city and created a group called Capital Black, to “empower youth and generate conversation.”

The responsibility that comes with a platform

The pair says that their platform carries a lot of responsibility, but they also feel that they can access a large audience and inspire youth to also use their voices.

“Yes I do represent Canada, and yes Canada has issues, but because I’m at this platform, I can access a lot of people and I can inspire a lot of people,” says Williams.

For the two of them, however, the fight is only just beginning,

“There are boiled water advisories in Indigenous communities, the un-housed issue in British Columbia, the opioid crisis, these issues are really important, and politicians and everybody in society needs to educate themselves on these issues because these are huge things that need to be addressed.”

The two are planning to continue to speak up and push for change, on and off the field, regardless of the pushback.

“Most of the backlash has really come from folks not wanting me or not wanting to see anything other than somebody running on the field, but that’s not who I am,” says Williams.

“I am not just an athlete, and I think most athletes would say the same. When we leave this earth that’s not going to be the only thing that we take with us.”